Home / Reviews / Sunburn Review: Gonna’ Die With a Little Help From My Friends 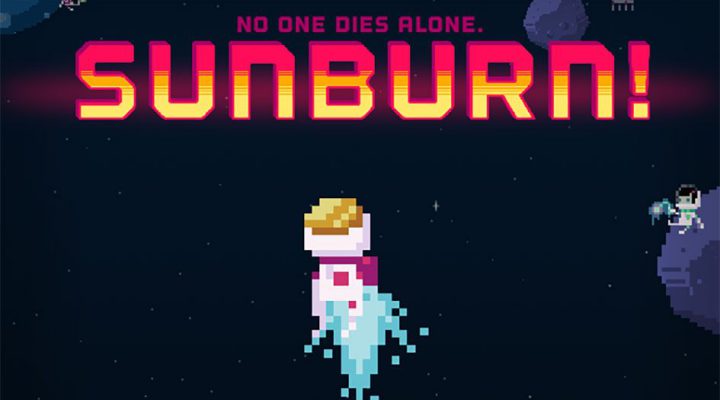 Varied level design keeps players on their toes (or fingers!)

With many astronauts tied together, movement physics can (rarely) get a little wonky!

“That look on your face!” she exclaims. “You look like you’re having so much fun.”

Then, l hurl the puppy to its fiery death.

I promise, this isn’t a scene from life with the world’s most irresponsible pet owners. Rather, it’s one of the many morbid delights to be had while playing Sunburn, one the most conceptually original mobile games in a dog’s age. Sorry, I couldn’t resist. 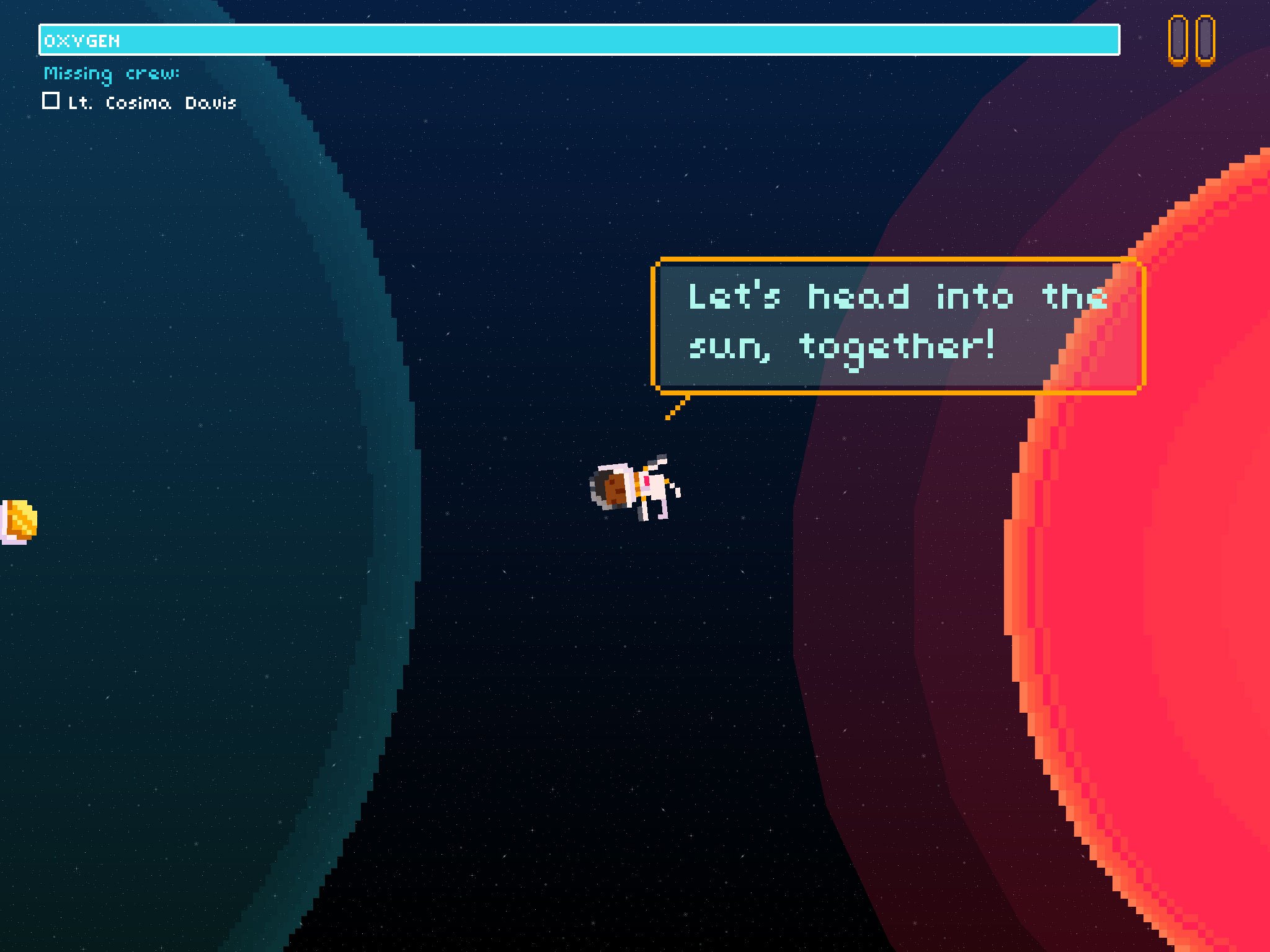 After being tossed asunder by an unexpected blast to their ship, a crew of intrepid space explorers is left stranded in outer space. As their captain, this is where you come in — but not in the way you might think. Rather than try fruitlessly to search for safety amongst the stars, the helpless astronauts agree: it’s time to go out with a bang. Or rather, a sizzle. Zooming through the cosmos, you grab ahold of your crew and travel together to whatever awaits inside the sun (spoiler alert: it’s death. Death is what awaits inside the sun).

Across 50 levels, Sunburn tasks you with zipping around to link up with your stalwart cosmonauts, harnessing the gravitational pull of nearby planets along the way. Success is a delicate balance of careening through zero-G, avoiding obstacles, and using your jetpack to land, reoxygenate, and take off once more. After all, you don’t want to suffocate to death before you have the chance to reunite and burn to death. Wow. There really is no getting around it: Sunburn is twisted.

But honestly, that’s part of its abundant charm. Developer Secret Crush perfectly marries a fatalistic premise with an adorable pixel aesthetic and cast of happy-go-lucky oddballs. The result is delightfully off-kilter, and instantly hilarious. Separate of the novel premise itself, it’s hard not to laugh as you zip lovingly towards Porkbun the cat, outfitted lovingly in a kitty-sized spacesuit, only to have her meow obliviously as you lead her, expressionless, to a magma filled grave — all the while being congratulated for the seconds you shaved off the time it took to complete your suicide mission. This total, straight-faced absurdity pervades Sunburn from start to finish, and is reminiscent of team member Diego Garcia’s equally outlandish solo project, Heads Up! Hot Dogs.

The game doesn’t rest on the laurels of its original premise, either. While there are certainly other gravity-based puzzlers out there, Sunburn’s elegant, highly learnable control scheme and clever level design handily set it apart. Tapping and holding both sides of the screen boosts you forward in the direction you’re facing, while holding one side or the other rotates you left or right, allowing for easy reorientation both on a planet’s surface and in mid-air. Rebuking the genre-standard “slingshot” control scheme feels all at once foreign and refreshing. Almost as if by osmosis, flying from planet to planet quickly feels like second nature; far from iterating, Secret Crush has created a new genre standard. 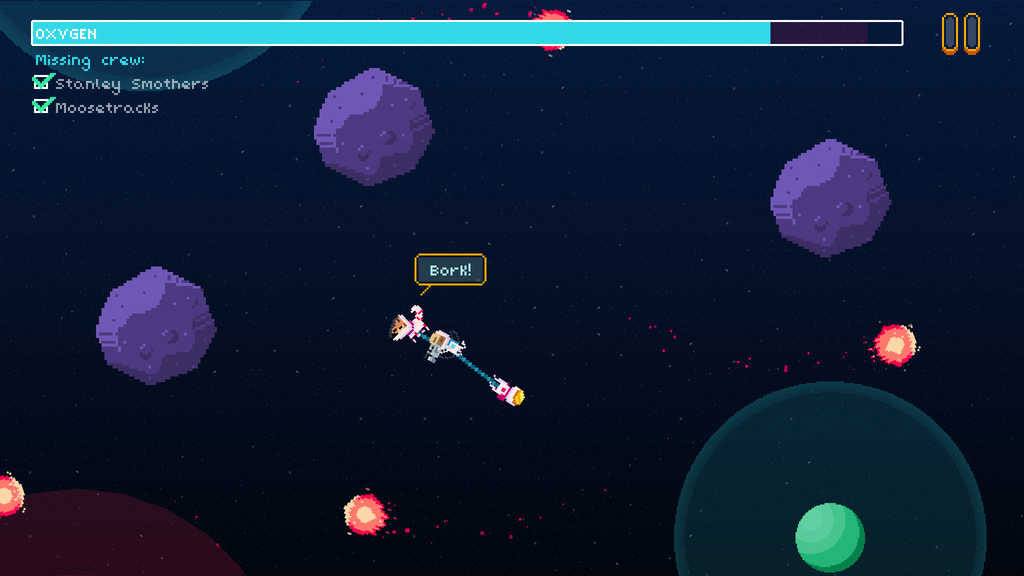 Similarly innovative are the levels themselves. From basic planets whose visible gravity field pulls you and your crew in, Sunburn graduates you to bouncy rock formations, lighter orbs that drift through space upon landing, circling balls of fire that prevent you from dying as a group, glass planets that can only sustain so many touchdowns, and black holes that exhaust your oxygen as you boost aggressively to get through.

Each individual element is introduced at what feels like a leisurely pace, with difficulty ramping up naturally until you’re eventually winding through massive spaces littered with every obstacle possible. Sunburn demands and rewards a deft combination of precision and playfulness, making it a joy for the mathlete and the aesthete alike. 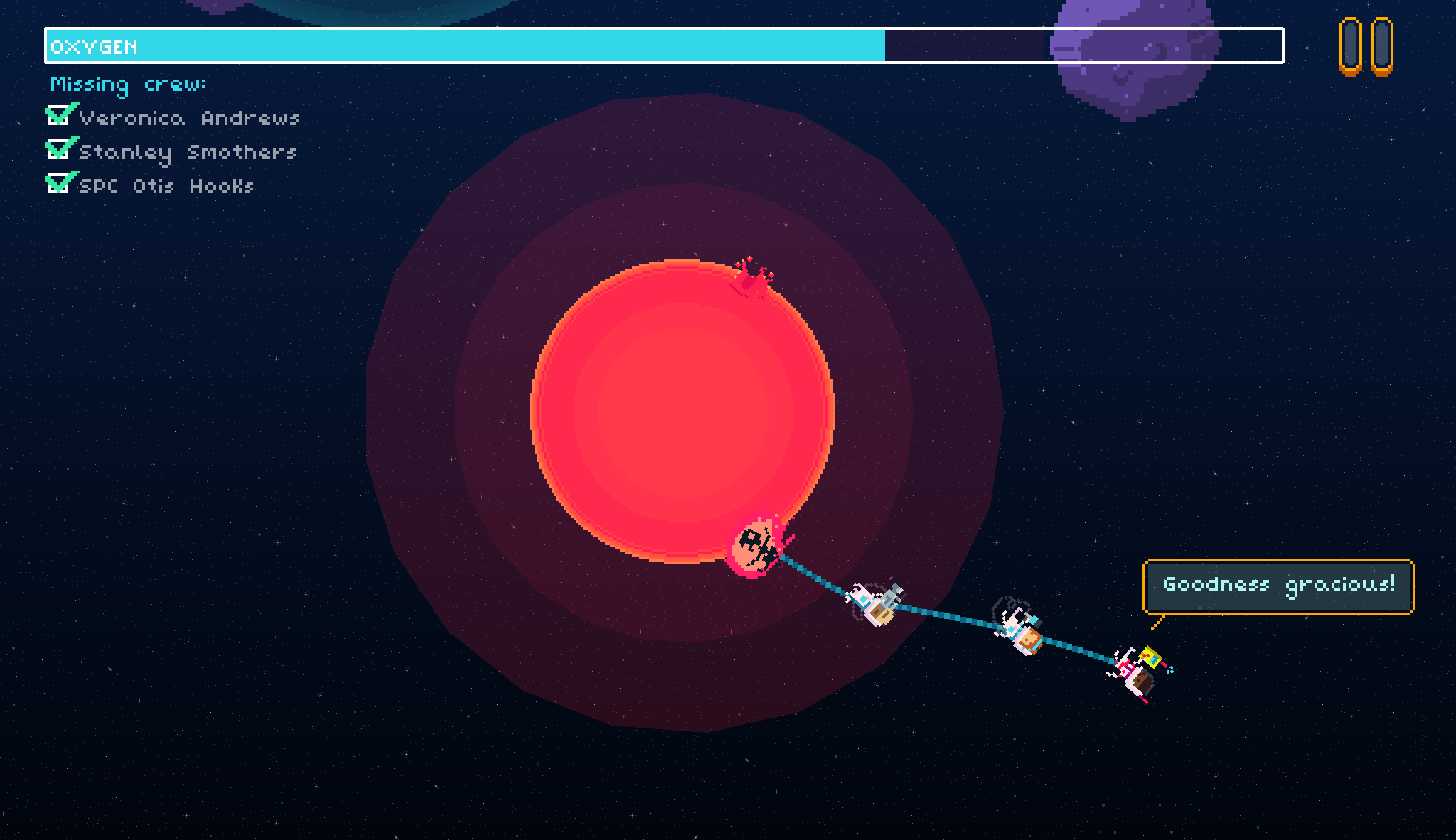 If there’s any shortcoming to be found here, it’s perhaps in the game’s insistence on timing each level. There’s great joy in a self-contained experience, and Sunburn’s general tone of comedic desolation and the oxygen mechanic already provide the perfect level of pressure, without the need to chase a high score. As it stands, this is the ideal game to take with you on a plane ride, or curl up with on a weekend, but I can’t see myself returning for the sake of pursuing arbitrary goals.

With that said, Sunburn’s inventive originality makes it a game you don’t want to miss, and easily earns it the most prestigious honor I’ve ever made up after a colon: Gamezebo’s award for Best Ever Game About Reckless Interstellar Self-Immolation.