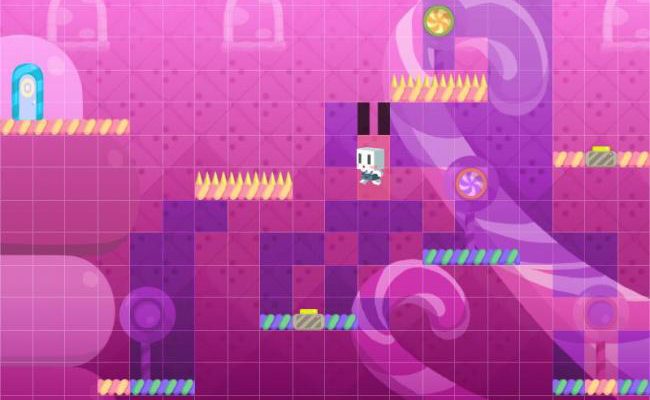 It’s been suggested that you can get the feel for whether a game is going to be fun within the first 15 minutes of play. Whether or not you believe this is the case, one thing is certain: if, after 15 minutes of play, you can’t stand any more of a certain game, let alone “get a feel” for it, then things really aren’t looking good for said title.

Sugar Cube: Bittersweet Factory is a platforming puzzler in which Turtle Cream appears to have come up with a concept and then implemented it without even considering whether the overall idea works or not. It’s frustrating to the point that we really had to force ourselves to push onwards, during which we discovered that it really doesn’t get any better.

You are a little sugar cube who has decided he doesn’t really want to be turned into a sugary treat, and instead wants to escape before someone gobbles him down. He’ll need to escape via a series of rotating platforms and through lots of candy-cane doors before he is truly free.

Each level is made up of a grid, in which there are two sides to each square. As you touch a square, it flips around to reveal whatever is on the other side, be it a blank space, a platform to jump on, or something deadly. By trial and error, you need to flip spaces over, reveal a path to the exit, and then use it to complete the level.

While it seems like there’s not much to this concept, if you touch a space a second time, it will flip once again and spoil the path that you’ve made. Hence, you need to be extra careful in which you flip, or else you’ll accidentally create gaps in your pathway and end up falling to your doom.

Unfortunately, the best tactic to winning, rather than being careful, is to simply flail around each level, reveal enough platforms such that you can jump all the way there, and then go for it. There aren’t really any tactics, other than cover as much of the screen as possible.

Even so, Sugar Cube: Bittersweet Factory can be really frustrating. You’ll accidentally touch panels you didn’t mean to, and flip over platforms that you were about to jump on. There are also numerous levels in which flipped tiles will not flip back over, and you will easily trap yourself in a space and have to restart the level to get out. 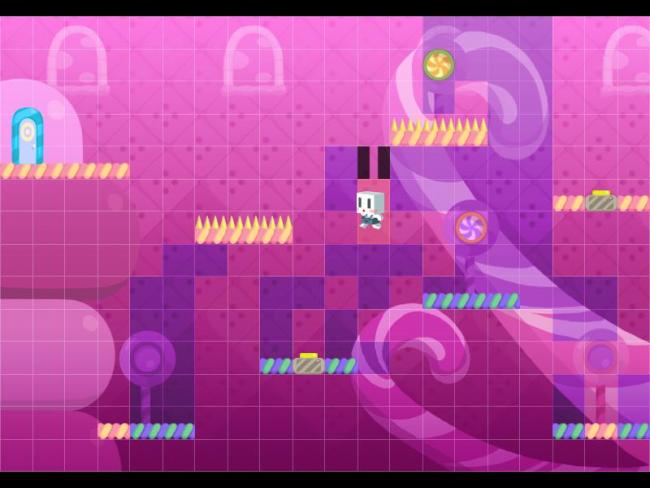 There are special levels which try to mix things up, such as boss battles, but these are actually rather simple – once again emphasising the fact that the underlying concept for the game really isn’t that interesting at all.

Sugar Cube: Bittersweet Factory proves that not all concepts that sound interesting on paper actually work. It’s not worth checking out, especially considering the vast number of decent platform puzzlers out there.