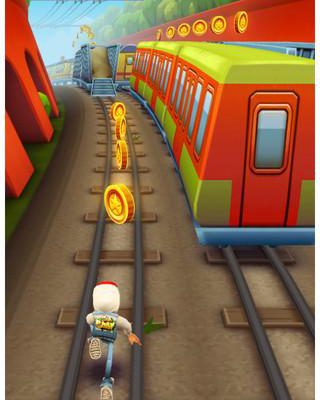 What better reason to run forever than the threat of jail time?

Having never possessed the stamina required to complete a marathon, I feel a resentment of sorts towards endless runner games. How come the hero in Temple Run can run as far as he likes – skill of player permitting – and I can barely run two miles? And don’t tell me exercise, because that clearly isn’t what gives the characters of Subway Surfers an advantage. No, they have access to jetpacks and hoverboards. Not fair.

Not unlike my day-to-day life, the goal of Subway Surfers is to evade the cops at all costs. This means dodging trains, jumping hurdles, and taking advantage of power-ups like the previously mentioned hoverboard. It’s as though the developers read my diary and decided to make a game out of it.

The controls aren’t unlike what you find in most endless runners: Swipe left and right to switch lanes, up to jump, and down to tuck and roll. If you’ve any power-ups or items in your arsenal, a double-tap will activate them. It’s a very streamlined control scheme, which compliments the reaction-heavy style of gameplay. That said, I still occasionally leap to the left when I clearly should have leaped to the right.

Being that it’s a 3D endless runner, there are plenty of comparisons to be made to Temple Run. That said, the developers of Subway Surfers avoided turning it into anything close to a carbon copy. Having seen many a clone arrive and get promptly removed from the App Store, the distinctions are plenty appreciated. For starters, there’s no sort of tilt mechanic for gathering coins. On top of that, there are no corners you have to turn, making it easier to plan moves ahead of time. This results in the game being a bit easier, which, depending on who you are, may or may not be a good thing.

The power-ups in Subway Surfers add a level of variety to the gameplay. There’s a magnet that attracts any and all coins you’re near, boots that increase your speed, a jetpack that places you above all the obstacles, and more. You can earn them by playing the game, but the option to purchase and upgrade them via in-game store also exists. You can get quite a bit of currency for just $0.99, but the game is good about giving you a decent amount from just playing. 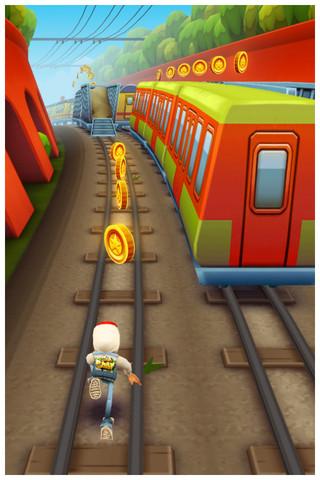 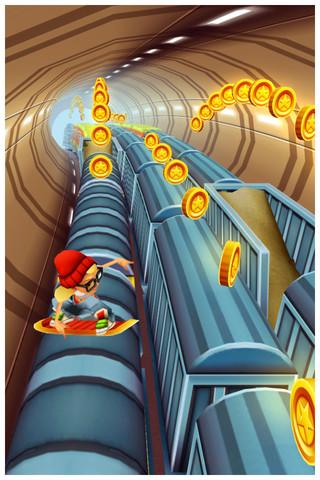 Similar to Jetpack Joyride and many others, Subway Surfers offers a collection of missions that add objectives outside of just “run as far as you can.” One, for example, requires you to tuck and roll 30 times total while playing. And in an effort to stoke that just-one-more-time appeal of endless runners, there are “daily challenges” that must be completed in the span of – you guessed it – a day.

It didn’t happen all too often, but an occasional dip in framerate led me to an untimely crash into the back of a train. It’s the kind of thing you can brush off in most games, but it can take a serious toll on games like Subway Surfer that demand fast reaction times.

It makes little attempt to stand out from other endless runners, but it’s hard not to appreciate the polish of Subway Surfers. The controls are responsive, the gameplay is addictive, and it doesn’t try and force you into spending cash on in-game items. It understands what people love about the genre, and it provides just about everything one could ask for.