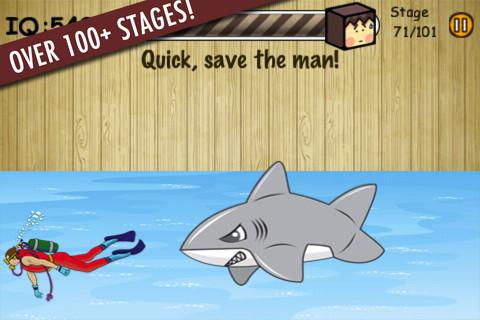 Stupidness 3 is stupid. Well, at least that’s how it makes you feel. Credited in the App Store to Ming Liang Chien, the game, as a whole, is developed by OrangeNose Studio. A compilation of various questions, puzzles, and mini-games, it’s an app that is creative in its design, utilizing several out-of-the-box answers. That in mind, the game actually seems to try and make the player feel like a moron by limiting their answer time and making the answers as ambiguous as possible.

Stupidness 3 is part of a series that has fluctuated in terms of its success, and any criticism must be prefaced by the fact that this game will not appeal to everyone. Broken up into sections of questions, you work your way through the game, restarting at pre-set checkpoints. Restarting a lot at pre-set checkpoints. As you answer each question, your “IQ” score increases. At the end of each section, that total is tallied up and becomes sharable on Facebook, but most of the time for new players, it will be rather low.

What contributes to the relatively low scoring of the game is that time is limited and questions are designed to intentionally try and fool you. In terms of the former, every wrong answer reduces the total time left to complete a section. What makes matters worse, though, is that sometimes even the wrong answer is unclear.

Some questions are fairly straight forward, and actually test intelligence such as pattern recognition or carefully reading instructions. For example, a particularly good one asks you to fit three shapes within three outlines. There are two triangles and a square along with the outlines of the same. However, the triangular outlines are slightly rotated, thus you cannot place the shapes within them. Instead, they must all be placed within the square outline.

It is a beautiful example of lateral thinking and makes for a great brain teaser. However, all too often, Stupidness 3 simply goes against the usability and intuitiveness of software in general. For example, one question asks you to compose the smallest possible number with a series of three digits. The solution? The game expects you to drag the period from the actual directions and make a decimal number. For virtually every other game, players never interact with instructions in such a way, thus there is no chance that a new user to the series would think to do so. There are several other examples of unintuitive brain teasers where it is impossible to really know what the game expects, resulting in wrong answers.

Another a good example of this is a teaser that asks you to “Push the button” in which a big round button is presented on the screen. Player intuition is to touch it, which is, technically, pushing the button. Nonetheless, the game wants a different type of pushing which would be touching the empty space around the button and “pushing it” that way. Okay, it makes sense, but normally users on a touch-based game don’t interact with nothing.

As you progress through the game’s 100+ puzzles, you begin to get the gist of how the game expects you to think and begin to take into consideration all possible interactions. Unfortunately, Stupidness 3 does still stump you with new interactions as soon as old ones become part of your thought patterns, such as arbitrarily rotating or shaking the iDevice. As with all the other examples, it is usually impossible to realize that that is what it wants. All that said, Stupidness 3 requires a certain type of user to enjoy, and those uninitiated by the previous iterations of the game are likely to become frustrated and annoyed (and in some cases insulted) very quickly. It often feels like someone asking you what two plus two is, in a foreign language, and then calling you dumb for not knowing. 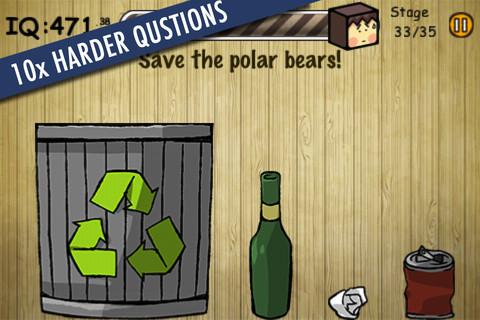 In order to mitigate some of the frustration, the application does have a hint system, which will explain the solution (which is sometimes done better in some puzzles than others) at the cost of one’s IQ score. Unfortunately there is no way to simply access the hints. You have to put in a few wrong answers before the prompt to use the feature appears.

Despite the game’s numerous qualms, it is presented very well, and has a wonderfully simplistic and cartoonish art style to it. Also, once again, it is worth stating that the creativity behind some of these brain teasers is phenomenal. It’s just that the audience is going to be pretty hit and miss in regards to whether or not it is appealing to them. For fans of the series, and those used to the style of thinking Stupidness 3 asks of them, it is a wonderful addition to one’s iPhone collection. That said, if you are new to the game, impatient, or easily frustrated (or even moderately frustrated), this is an app to steer well clear of.