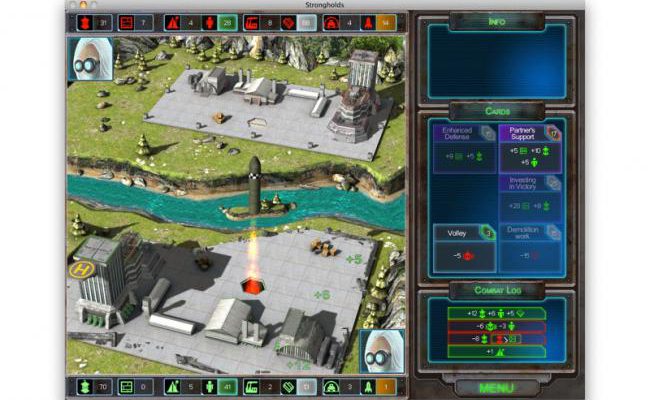 Blast your opponent’s stronghold to smithereens in this turn-based strategy card game.

From “Magic: The Gathering” to “Pokémon,” trading card games have entertained collecting fiends and strategy players for decades. In Strongholds: New Age, a follow-up to the original Strongholds, players face the computer or go head-to-head in an electronic version of familiar, number-crunching trading card battles.

This time around, the budding “Strongholds” franchise continues its fortress-decimating melees as it makes its way to Mac and iPads. Players will quickly recognize the gameplay in this latest iteration: It’s a turn-based, mano-a-mano skirmish, and each player has a hand of six cards at any given time. There are over 100 cards, and they have different effects and costs. Each card adds to or subtracts from players’ resources. For example, the “Scattering Mine” card, which wipes out 13 units from your opponent’s perimeter and stronghold, sets you back three weapons and 13 men. The sunny-sounding “Dysentery,” meanwhile, exterminates seven men on both sides. “Investing in Victory” adds 20 perimeter and 8 stronghold units to your defenses. And so on and so on. Choose from two difficulty levels, and let the bullets fly. 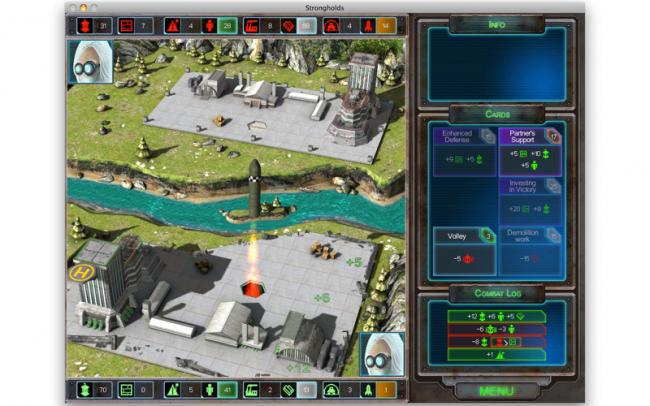 Many strategy games are often bogged down by byzantine rulebooks, drowning in a morass of numbers, items, details and special exceptions—which is fine for many players, but it makes the game less accessible or interesting to others. Strongholds: New Age artfully balances complexities with easy-to-learn gameplay. All the numbers and icons might be a little intimidating at first, but since the objective is to basically keep your figures up while depleting your opponent’s, the game doesn’t exactly get overwhelming.

Still, it suffers from a certain lack of depth. There’s no story mode, really. Perhaps certain missions, like flattening your foe in less than ten minutes, could have made Strongholds: New Age less one-dimensional. And while games like this don’t necessarily need a rich soundtrack, by any stretch of the imagination, an ambient background tune or more varied sound effects would have been a nice touch.

Strongholds: New Age is an approachable strategy card game, but still has meat on its bones. While the gameplay may struggle to offer lots of surprises or replay value, there is an online multiplayer mode, as well as an online leaderboard. But the nicest thing of all? No losing any trading cards in between couch cushions.