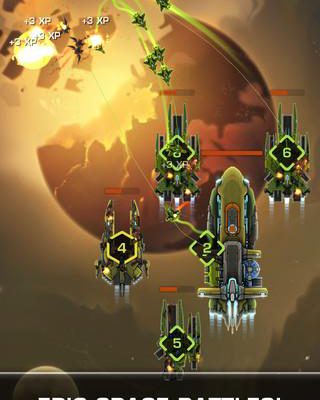 Sure, alien bugs may have destroyed Earth and reduced its space fleet to a ragtag handful of survivors. But buck up: If you’ve got an iOS or Android device, you can still score a few victories for humanity with Strikefleet Omega, a freemium space battle game from Harebrained Schemes and publisher 6waves that turns the struggle for mankind’s survival into a whole lot of fun.

The bugs’ assault has decimated Strikefleet Alpha and a lot of other squadrons named after Greek letters. That leaves you as an admiral at the helm of the E.E.F. Retribution, flagship of the titular Strikefleet Omega and Earth’s last chance to retaliate. Your mission is to take the fight to the aliens, taking out their queen while there are still human colonies left unscathed.

To do that, you’ll travel from system to system attempting to fend off increasingly challenging attacks from the bugs. Victory is a matter of defeating a specific number of enemy ships without losing your command ship, but a three-star system of success – like the one in the Angry Birds series – earns you greater rewards for more efficient wins.

The Retribution doesn’t have to fight alone. It’s complement of fighters is perfect for taking out the most basic enemy ships, but later stages find you up against shielded bugs, bombers and even alien capital ships. Thankfully, mankind still has some more weapons up its sleeve, and you’ll be able to unlock interceptors, bombers and gunships to counter specific threats.

Sending the right mix of ships at the right time is the essence of the gameplay, made simple by the tap-and-drag flight paths that send them launching from their carriers to exactly where you need them to go. Artillery strikes from the gunships are aimed with a simple tap, though timing is important as the shells take a second or two to reach their targets. The control system is easy to pick up, and you’ll be grateful for its simplicity when the action gets crazy later in the game. 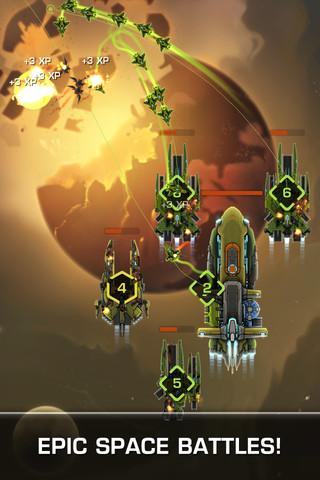 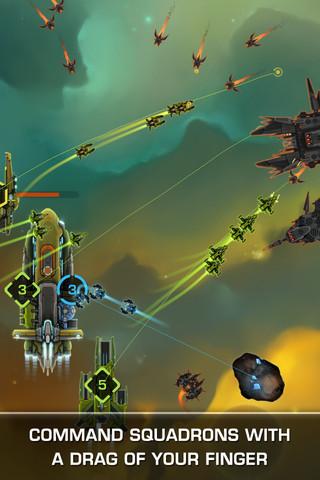 While blasting bugs, you’ll also have to watch your crystal levels. Crystals are needed to warp in support carriers, and though they build up slowly over time, that won’t be enough for the tougher stages. Mining ships can be sent out to gather them faster, but they make easy prey for the bad guys, giving you one more thing to worry about in the heat of battle. Having more crystals left at the end of a level is a key factor in the number of stars earned, so spending them intelligently is a must.

Alloy is the currency used to purchase new support ships and upgrade existing ones. You’ll receive some at the end of every cleared stage, plus more each time you earn enough experience points to level up. The premium currency is called Megacreds, necessary for buying some of the more powerful support ships, using power ups called Perks and activating the screen-clearing ultimate weapon called the Death Blossom (perhaps a tribute to The Last Starfighter, eh Harebrained Schemes?). Props go to the developers for leaving a way to pick up Megacreds during play, at least in small amounts, by taking out the alien Saucers. 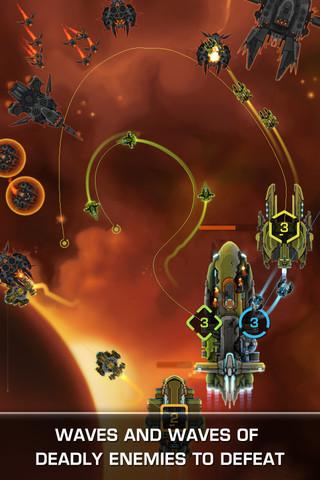 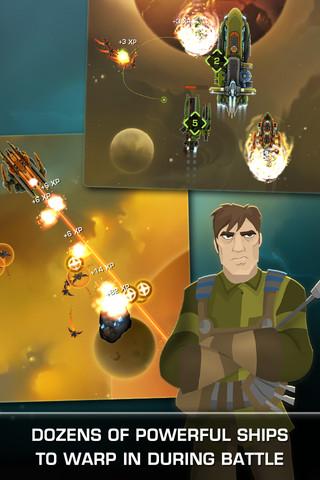 Graphically, Strikefleet Omega won’t knock your socks off, but the artwork is solid, and it’s obvious some care went into the ship design. The suitably triumphant theme that plays at the end of a cleared stage is the highlight of the sound effects. The only thing that can really be called an annoyance is the presence of ads during the loading screen and in-between missions, as they feel a little more in-your-face than in other freemium games.

We’ll chalk up those ads as a necessary evil. Harebrained Schemes has a history of turning out well received titles without needing tons of resources to make them, and Strikefleet Omega lives up to that tradition just fine. It’s a must-download for anyone who enjoys games that require fast reflexes and quick thinking, or just wants to have a blast while making sure humanity sticks around for a while.