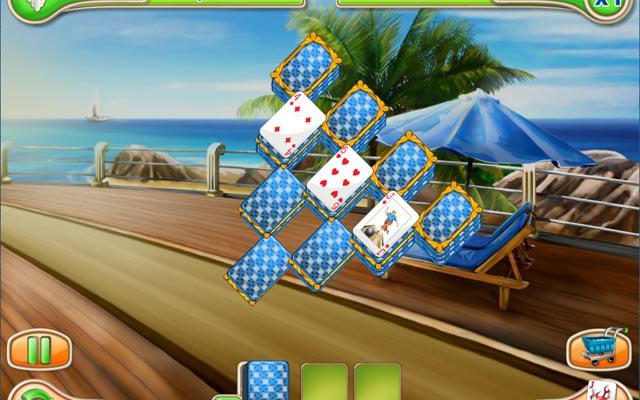 “Bowl” a perfect game by playing a unique match-two spin on the original Solitaire.

Big Fish Games had an unexpected hit with Fairway Solitaire, a golf-themed take on a well-known card game. Fairway‘s attraction went well beyond golf enthusiasts, keeping gamers of both genders (including yours truly) playing until the wee hours. It’s natural other developers would try and emulate that kind of success, and 8 Floor Games tries by blending solitaire and bowling. It’s an idea that really should work; unfortunately, due to a lack of charm, style and depth, it doesn’t quite.

Unlike its golf-themed antecedent, Strike Solitaire doesn’t have any sort of narrative context. You’re presented with images of a fancy desk, a moving road and a country-clubbish location (which when you think about it, is odd) and then tossed onto an outdoor bowling lane (even more odd). Already, we encounter a missed opportunity. The bowling element of the game could have been really cool; we could have been treated to some crazy-looking bowling alley backgrounds, but instead we’re incongruously bowling in the middle of various grassy swards. I can just picture the funky card graphics and the sound effects reminding us that we’re bowling. But that’s the problem—I have to picture it, since the game fails to make any of it happen. 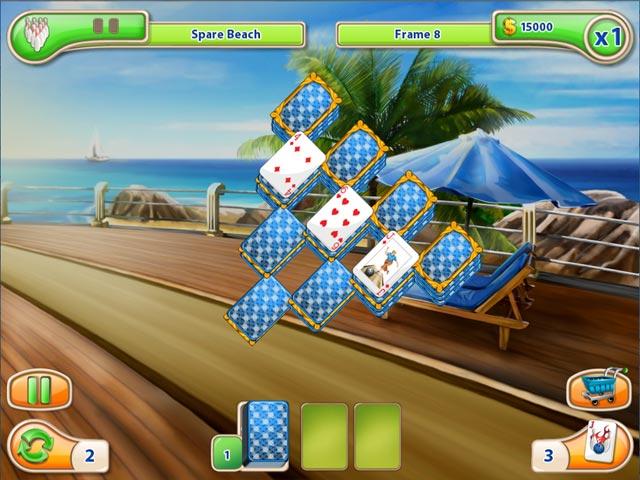 Not only is the game lacking cool locations, it’s lacking solitaire. The idea is to click two matching cards on a complex layout until you remove the special gold-colored cards stacked at the bottom of it. Using the draw deck, you continue to match cards and if you clear all the gold ones on the first ball, you score a strike—if on the second ball, you get a spare. I guess I’ve played too many solitaire games, but this match-two concept kept tripping me up. My brain persisted in trying to create strings of cards and/or to lay cards one higher or one lower rather than attempting to match two. I also kept trying to associate the matched cards with bowling pins but it just wasn’t happening. And here’s where we find another missed opportunity.

What’s cool about Fairway is that by creating long card runs, you make better golfing shots. Here, the only real reference to bowling is the number near the draw deck that lets you know whether you’re on ball number one or ball number two. Long runs of matches are somehow not as exciting here, and part of the problem is that it’s so easy to cheat your way to a strike. Money is earned as you play, and you get so much of it and can buy so many power-ups (like reshuffle or wild cards), that clearing the board isn’t really all that satisfying. The bowling theme isn’t woven into the game in any graphic or narrative way, so all you get are uninterrupted frames, an extremely limited shop, and now and then an achievement notification.

The game’s graphics aren’t particularly thrilling, but that’s (I suppose) forgivable. It’s only a card game after all. What can’t be overlooked though is its repetitive, goofy soundtrack. Before I got annoyed and turned it off completely, the music was cracking me up. At times it sounded like the “getting personal” music from a reality TV show, and at other times it reminded me of an overwrought rock ballad from the 1990’s. Either way, the musical themes were limited enough to get truly tiresome after an hour or so. 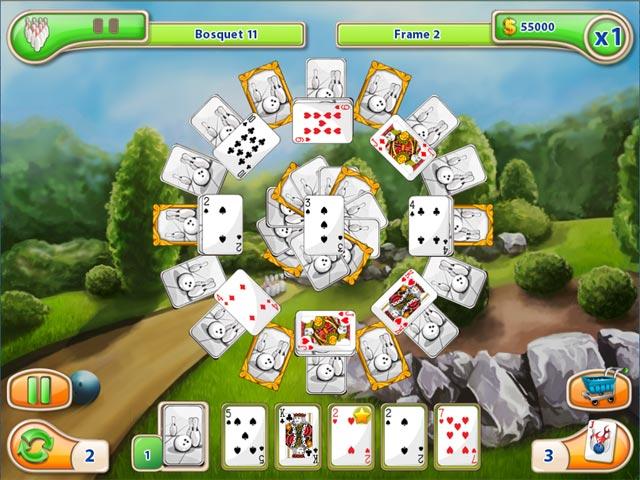 Aside from its rarely-acknowledged bowling theme and its questionable musical taste, Strike Solitaire’s main problem is its utter lack of depth. Although card layouts change from lane to lane, making some frames more difficult than others, they do little to promote the idea of growth or progression. The last frame of the last lane feels more or less just like the first frame of the first lane. And there’s also very little difference, graphically speaking, from lane to lane, you really have to wonder why we needed more than one. We’re given two gameplay modes: Junior, where you can replay any individual frame for a better score, and Profi (“profi”? Is that a word?) where you’re forced to replay the entire game. That being the only difference between the two modes, again you have to wonder—why bother?

Strike Solitaire’s ambition seems to have been to replicate the Fairway phenomenon. Sadly, all it achieves is a dull, repetitive, dumbed-down version of solitaire with very little to recommend it. If you’re in the mood for a fun solitaire hybrid, I’d say you’re much better off checking out the free-to-play variants on Facebook.