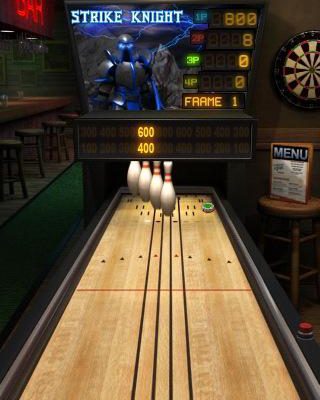 Puck games have long been a staple of local bars and pubs all around the world. While it was never the most popular of these games, puck bowling is a pub-based pastime that a lot of us hold near and dear to our hearts. Strike Knight, from the makers of the ever-popular Paper Toss, is looking to spread the love of puck bowling around the world once again – this time by putting it in your pocket.

If you’ve never set foot in a bar or pub that had a puck bowling table, the idea here may be new to you. Thankfully it’s not a difficult idea to pick up. Puck bowling is similar to real bowling, except instead of a ball and a massive alley, you’ll be sliding a puck across a plank no bigger than a pinball table trying to knock down some equally miniaturized pins. The goal, like real bowling, is to try and get as many strikes and spares as you can in 10 frames. 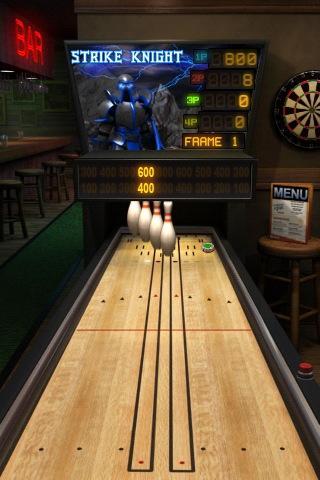 Presentation is surprisingly strong for such a simple game. Rather than simply dumping you in front of a non-descript table, great care was put into re-creating an authentic pub experience. In the background you can see things like dart boards, menus, and bar stools. In terms of audio, Strike Knight is filled with ambient crowd noise just like in a real pub. If you listen real close you can almost follow the conversations.

Everything on the table is presented just as well as everything off of it. The game itself feels a little like an homage to the pinball classic Black Knight with occasional audio quips from the table to match. Since this is a video game, Backflip could take some liberties in the presentation, and as such the knight on the machine comes to life in little animations between frames. And those crowds? They boo and cheer every puck you throw.

Gameplay is the thing that truly counts, and Strike Knight certainly knows what it’s doing. The physics are a good approximation of what puck bowling is actually like. It’s so good that it makes us pine for more puck-based games. Where’s our table shuffleboard? Or better yet, curling? Sure other developers have tackled these, but considering how good Strike Knight feels, we can’t help but want to see Backflip tackle those next.

It’s that longing for more that is really at the heart of Strike Knight‘s one weakness. Despite the sharp physics, the fantastic presentation and the Plus+ achievements and leaderboards, there isn’t any variety in this title. What you see is what you get: one table, ten frames, and the hopes of outdoing your previous score. Strike Knight may be a faithful recreation of puck bowling, but it’s hardly a robust offering by iPhone standards.

Still, there’s little reason to complain when you realize that the game is both free and so charmingly faithful to the coin-operated games it’s emulating. With easy, accessible gameplay and a price that everyone can agree on, it seems pretty likely that Backflip Studios has finally found their next Paper Toss.