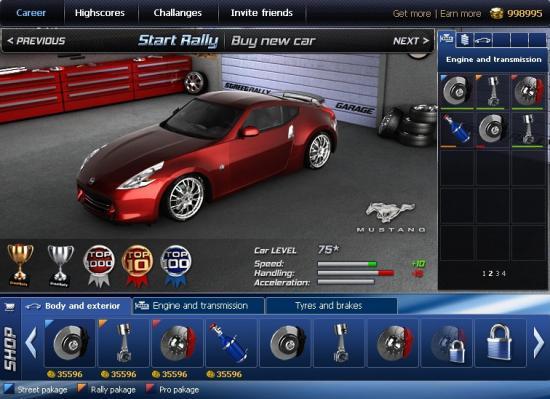 It’s hard to be too fast or too furious while sitting in front of your computer (unless you’re furious at your computer), but you can do some drifting through Tokyo, Miami and several other major cities right on Facebook. Hypester’s StreetRally will have you squealing tires with the best of them while racing against live and AI opponents, though this street racing experience is missing just a bit of authenticity.

Teenagers everywhere are probably wishing driving was as easy as it is in StreetRally. Using just the arrow keys, you’ll pick up the basics in no time. Fancier maneuvers can be pulled off by hitting the space bar to activate the handbrake, and cars equipped with nitrous can get a boost of speed with the shift key. Playing through the tutorial will leave you with enough coins to buy one of several different entry level cars, and then it’s off to the streets of Miami.

The variety of courses and race types is probably the game’s biggest strength. Some tracks are simple winner take’s all races against one or more AI cars. Other stages require some less-than-law-abiding behavior, like outrunning cops or damaging an opposing car in a bit of virtual road rage. There are also skill tracks that test your ability to navigate obstacles as quickly as possible and drift tracks that simply ask you to earn as many points as possible by drifting around corners, doing donuts and pulling off 360-spins before time runs out.

You’ll find all of those single player tracks in Career mode. If you’d rather race against humans, there are League and Tournament modes that involve multiple races for coins and experience points. One-on-one challenges can be made to other drivers, and a simple multiplayer option can get you a quick race against one or two random strangers. A full set of leaderboards and track records lets you know how you are stacking up against everyone else. There’s plenty to keep you occupied, and unlike many social games, nothing to keep you from cranking out race after race if you feel like it. The only downsides are the long load times and the odd track that fails to load at all.

In-between races, you can return to the garage to work on your cars. Every vehicle can be upgraded with multiple tiers of engine, transmission and suspension parts, as well as tires, brakes and more. On top of the functional stuff, you can customize your car’s look with new paint, rims and tinted windows. The garage itself has a purpose too, as different tools can be purchased to repair or prevent damage. All of it costs coins, or Facebook credits if you don’t have the patience to grind out coins on the track.

About those cars, though. While they look great close up and are acceptable enough in the top-down, original Grand Theft Auto style view used during races, it won’t escape your notice that while they look pretty similar to popular tuner cars, they aren’t quite the real deal. StreetRally did show off some licensed cars while it was in beta, but the cost must have been too high for real vehicles to make it into the finished product.

The other thing that you may find grating is how often the game asks you to upgrade to VIP status. For a monthly fee, VIP members receive an exclusive car every month, 50,000 free coins a week, access to special garage items and extra entries to leagues and tournaments. There’s nothing wrong with the concept, as Hypester needs to make money off the game, and it might even be more cost effective than paying a la carte for players who fall in love with it. Just be prepared to be asked if you want to join. A lot.

StreetRally feels like the kind of game that will have a lot of people try it out but will only capture the hearts of the truly devoted. It’s a fun enough way to kill a few minutes on Facebook, though, and definitely a lot safer than the real thing.