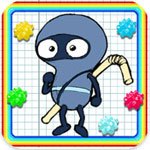 A ninja with a straw running after a polka-dot hat-wearing fairy dispensing candies may not be one of the deepest plots we’ve ever seen in a game. But in StrawNinja: Just Run, the newest game from developer Digital Play, that’s all that is needed to make a fun, challenging though slighting frustrating experience.

Touting a one-button gameplay technique, StrawNinja: Just Run stays true to its name. You play as an unnamed ninja, constantly running to the right in pursuit of candies flying off a fairy. To control the ninja, tap once on the right side of the screen to jump, then press again to extend his straw (used like a grappling hook) to swing across large gaps while avoiding obstacles on the flat ground. The challenge lies in getting as high a score as you can, based on distance run and candies collected.

The simplicity of StrawNinja: Just Run is its greatest asset. Trying to time jumps to follow the trail of candies across the five different areas is much harder than it seems. In order to get the highest score possible, there are special larger candies that appear throughout the game. If you can collect all of them in a single pass, you get a little boost to your score and the word Perfect flashes on the screen. In fact, these larger candies are often a guide for making multiple swings across gaps. By following them, you can time when to extend your straw to make a more successful – and lucrative – jump.

The graphics in StrawNinja: Just Run are very simple as well, but are full of personality. The game looks like it was drawn with a pencil crayon, and pulsates like an old hand-drawn animation. The five different areas range from a field to a city with towers to swing from to an entire area of clouds and special rainbow stars collect. Each area gets progressively more challenging, and after playing a few times, you will know what obstacles to expect when your locale suddenly changes.

Replay value in StrawNinja: Just Run is very high as well. There are four difficulty levels, ranging from easy to nightmare. What differs each level is how many obstacles you’ll face, and how soon in the game you’ll face them. Easy is pretty manageable, but expect a sore thumb after nightmare. To help improve your jumping and swinging skills, StrawNinja: Just Run includes a wonderfully-extensive tutorial mode, giving you a heads-up on the different challenges ahead.

Also, while each of the difficulty levels technically has an “end” once you travel far enough through the five levels, StrawNinja: Just Run has an Endless mode, which has an almost zen-like quality to it, allowing you to play for as long as you’re able without the game stopping.

Unfortunately, there are a couple of hitches that prevent the game from being truly great. The lack of music in the game is punctuated by the annoying sound effects. Each candy makes a distinct “ping” sound, but when there are dozens upon dozens of candies in a row being collected, it’s like a high-pitched jackhammer. The fact that you can’t play your own music during the game certainly doesn’t help matters (although you can mute the sound in-game).

But the biggest problem is the hit-detection for the straw. When extended, it shoots out of the ninja at a 45-degree angle. As long as it hits a structure, like a tree, building or a cloud, the ninja will swing across. However, there will be a few frustrating occasions where you’ll see the straw pass right through an object, leading to a wrongful demise.

However, as far as fun for your money goes, StrawNinja: Just Run is a fun game for short spurts of time. The simple, frenetic gameplay is easy to understand but hard to master. There is a free version on the iTunes store to get you started. Despite a couple of issues, it’s definitely worth taking StrawNinja: Just Run out for a swing.