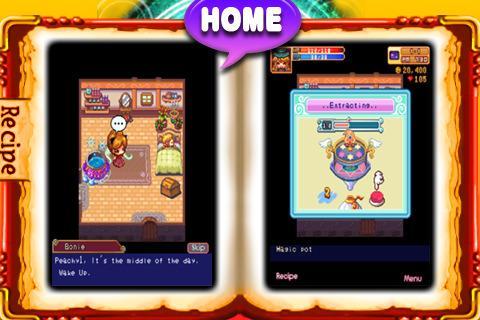 Strange Pharmacy is one of those games that I expected to be a fun little JRPG in the same vein of Harvest Moon. It sported some cute title screens and anime-esque graphics, and promised to provide a series of fun little minigames. Unfortunately this promise is a filthy lie: the game is a nigh-incomprehensible mess that is almost unplayable thanks to shoddy mechanics, a rotten translation to English, and a complete lack of fun.

So here’s the story, as best I could determine (more on that in a moment): the local witch in a quaint town has an apprentice -“Peach1” (I think her name was supposed to just be “Peach”) who wants to grow up as quickly as possible. Taking a note from Tom Hanks in the 1980s, she magically ages herself, but she doesn’t do the spell right and turns herself into an old woman. In order to become young again, she has to work at the witch’s pharmacy and save up to buy special herbs that will reverse the spell little by little. There are also a number of sub-plots about the witch being kind of a jerk, the locals trying to figure out what happened to Peach1, and that dreamy shepherd boy who guards the entrance to the woods, but it’s pretty hard to care about any of this because of how difficult the story is to follow.

A huge issue with Strange Pharmacy is that its localization is awful. This is without a doubt the most poorly translated game I’ve ever played, and I’ve played a lot of imported RPGs. In some cases it’s just simple spelling or grammar errors. In other instances, sentences just didn’t make sense. Words such as “crowdeded” were not uncommon, and the text wrapping didn’t work, meaning that words would break at the end of a line and continue either on a new line or another screen that I had to tap to access. It was annoying at best, and the fact that it never stopped was a constant source of frustration.

Normally broken English can be overcome by solid gameplay, but the problem here is that you’re going to spend the first half hour receiving a lot of rather complicated instructions. Seriously, it’s a good twenty minutes of cutscenes and instructions before you really start to play the game. On top of that there is so much plot forced on you that this flaw becomes all the more glaring.

The other problem with Strange Pharmacy is that it isn’t any fun to play. You have to move the aged Peach1 around the town to different pharmacies (and other map areas), but you have to constantly hold your finger to the screen in order to get her to move. She can only move in four basic directions (up, down, left, and right) which is a bit of a pain since it’ll take her twice as long to get somewhere than if she had the ability to move diagonally across a map. Not only that, but Peach1 will often get stuck on items unexpectedly.

Movement will also drain Peach1’s stamina, which you have to pay attention to because she will faint if the level gets too low. In order to regain stamina Peach1 needs to rest in her bed, but it only restores a portion of the energy, meaning that she’ll have to rest at least three or four times in a row in order to fully build her energy back up.

Managing the pharmacies isn’t exactly a joy, either. You have to stock up on various elixirs that you will later mix to create cures. In order to do this you have to go to the cauldron at your house, throw some herbs in it, and the then tap the hell out of your iPhone for five seconds. Based on how fast you’re able to tap, you’re rewarded with a number of elixir vials (with a bonus if you score high enough). The problem, of course, is that the game only detected about half of my taps. This meant that I was consistently scoring pretty low, which sometimes meant I had to go back out to either the store or the forest to acquire more herbs before I had the necessary materials to operate the pharmacy. 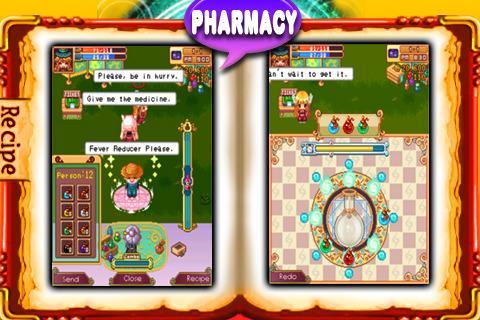 When you have enough elements to mix recipes in the pharmacy, you have to go to one of the pharmacy areas in town and open the store. Then you have to deal with customers and their various needs. You select a person, make a corresponding recipe, and dose the client with your cure. The recipe is a minigame where you’re told the various elixir colors you need to tap in a specific order within a time limit. Again, taps aren’t always detected, and you have to start over if you hit one out of order.

Once you’ve made the brew you have to administer it, which takes place via another timed minigame. If you don’t tap the screen when the falling bottle is directly over the corresponding area on the time gauge, you cause your patient to develop a side effect and subsequently lose reputation points for the pharmacy. Because my taps weren’t always detected, I wound up losing a lot of reputation points.

This is only a portion of the gameplay. You’ll also have to go out into the woods, battle monsters, find herbs, farm, run errands for the folks around town, etc. None of these play modes are any more enjoyable than the pharmacy portions.

It seems like the developers decided that if they couldn’t get the game to do anything well, they could at least try to make it do a lot of different things. If only some of these elements were good, this might’ve been a moderately enjoyable game. Unfortunately, there wasn’t a single part that could be qualified as “good.” Actually, there wasn’t much I would’ve labelled “mediocre”, either.

I spent a lot of time playing Strange Pharmacy, hoping it would get better. Then I started hoping that it would just end. Finally I held out a faint hope that it would irreparably crash and I wouldn’t have to play it any more. Life, it seems, is full of disappointments. Take my advice, and just give this game a wide berth. You’ll be happier that way.