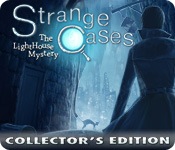 A dark dream. A mysterious woman with a glowing blue pendant. A dead FBI agent and a missing scientist. It’s strange stuff, alright. The sort of strange stuff that makes up Strange Cases: The Lighthouse Mystery, a new hidden object game that gets just about everything right.

Startled awake from a restless sleep, FBI agent Claire Ellery is shocked to discover that her nightmare vision has come true: Her former partner and mentor, Tom, is dead. Was it suicide, or murder most foul? (Hint: Is it ever suicide?) Claire’s investigation into his death soon has her following a trail of clues left by the victim himself, who risked and ultimately sacrificed his own life in a fight against one woman’s nigh unstoppable quest for power.

Taking a page from Claire’s last case, The Tarot Card Mystery, Tom prepared for his untimely demise by writing lists of clues on the backs of illustrated cards and stashing them throughout locations ranging from his apartment and his office to an abandoned shack, an underground laboratory, a fallout shelter and more. These “clues,” of course, are lists of hidden objects, and as Claire enters each new area she must first find the hidden cards and then track down the objects written on them.

There are three different types of cards, each with a different style of clue: Blue cards have a straightforward list written on them, green cards display silhouettes of objects and red cards (which to me actually look a little closer to yellow) show items that have been broken into small pieces which must be found and reassembled. Each level in the game can contain as many as three hidden cards, one for each type, which adds up to a lot of searching but also goes a long way toward keeping things fresh and interesting.

The searches themselves, as the saying goes, are “tough but fair.” Some objects are very well hidden but the game’s crisp, colorful graphics are a pleasure to see and play through, and won’t let players feel as though they’re being cheated by shoddy-looking backdrops. Most levels include at least one “interactive item” which must be used elsewhere to move the game forward, such as a screwdriver found in one level that’s used to remove a grate and reveal a hidden card in another. Levels aren’t timed but too much random clicking will earn a “cursor penalty” that sends the pointer spinning out of control for a few seconds.

Strange Cases: The Lighthouse Mystery also features several puzzle levels that, strangely enough, are all quite well done. Rather than the tacked-on, recycled time-fillers that are common in so many hidden object games, these are a well-varied blend of challenges that tie in well with the rest of the game. I struggled mightily with a few of them but managed to work my way through all but one, a “complete the circuit” puzzle which I suspect may be buggy. The strategy guide says the solution is random, yet the puzzle refused to acknowledge that I’d made the connections and turned on all the lights. Fortunately, the obligatory “skip this puzzle” option came to the rescue and I was on my way.

Visually, The Lighthouse Mystery is top-notch. The graphics, as mentioned, are sharp and clear, and cut scene interludes that move the story forward are plentiful and impressive. The voice acting, on the other hand, is a bit soft. Tom seems remarkably sanguine about his impending death and Claire doesn’t appear gripped by any sense of urgency either, despite presumably being wracked with anger over her old friend’s murder and fear for the future of humanity. Then again, the relatively abundant amount of voice acting is impressive in itself and speaks highly of the developer’s commitment to the game’s overall production quality.

Aside from the problematic puzzle in Chapter Two and one odd bit of rough translation (“Code of safe you can find in the apartment of Tom”), the game’s biggest flaw is that it’s occasionally unclear as to how to proceed. Now and then, I’d find myself wandering back and forth between rooms, unsure of what to do next and annoyed with the game for not being as helpful as I thought it should be. Luckily, the hint system not only reveals stubborn objects but also points players toward rooms with tasks that remain undone and that, in conjunction with a moment or two taken to pause and reflection, is usually enough to get things back on track.

The game is available in two flavors, the regular version and a swanky Collector’s Edition, featuring wallpapers, concept art, the game’s soundtrack (which, in a nice touch, can be saved to the desktop and listened to outside of the game) and a stand-alone “mini-HOG,” The Case of the Missing Scientist, that lets players take on the role of Tom in a short but well-executed prelude to The Lighthouse Mystery that sheds light on some of the events leading up to his death. It’s a nice if rather typical bunch of extras but as always, whether or not it justifies the extra expense is entirely a matter of taste.

All in all, Strange Cases: The Lighthouse Mystery is very impressive and goes well above and beyond merely hitting all the usual HOG touchstones. It’s fun, it’s challenging, it looks great and it even manages to tell a reasonably coherent story, and at around three hours of solid gameplay it’s got some decent staying power, too. It all adds up to a very solid, entertaining game that hidden object fans should definitely give a second look.