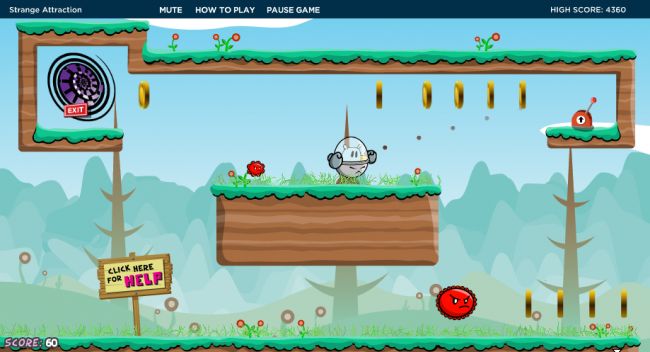 Strange Attraction is a free platformer full of unrealized potential

Cute, colorful, and full of great ideas, Strange Attraction seems to have everything necessary to make a fun platform game. Except for the actual platforming bit. For all its charm and inventiveness, Strange Attraction is severely hampered by poor controls and floaty physics, not to mention a very short length. It’s still worth a play, but it could have been so much better.

You play as a tiny little bean-shaped alien. One of your friends has developed a super cool suit that lets whoever wears it jump 20 feet in the air and punch holes in things. For a creature with no arms or legs, the appeal is obvious. And luckily for you the suit was built in just your size. It comes in handy too, as not long after putting it on your friends are captured by some evil aliens, leaving the rescue operation solely in your hands.

The game is divided into three worlds, each of which consists of several short levels. The goal in each level is to reach the portal-type-thing at the end, but there’s a lot standing in your way. There are enemies floating about, some of which can be eliminated with a quick punch, while others can only be temporarily stunned. There are floating platforms to navigate and switches that open up gates and flip the gravity. These switches will flip you upside down and turn the ceiling into the roof. It’s a fun twist and it turns many of the stages into puzzle-like experiences. Each stage is also full of optional coins to collect, which will boost your final score and add an extra dose of challenge.

Controlling the game is seemingly simple. You aim your punches with the mouse and let loose with a left click. Movement, meanwhile, is relegated to the arrow keys. Problem is, the jumping in the game is very loose. You never feel fully in control of your character’s movement, which is a problem for a platform game where precision is often necessary. It’s not a huge deal for some of the earlier and easier stages, but when the difficulty ramps up and you start missing plenty of jumps it becomes very frustrating.

Strange Attraction does look great though. The bean-like aliens are absolutely adorable, and even the menacing bad guys — which range from angry flowers to floating rocks — are charming in their own way. Strange Attraction is colorful, features three unique looking worlds, and overall is just lovely to look at.

So it’s a shame that it can be so frustrating to play. Solid controls make or break a platform game, and in the case of Strange Attraction they take it from being what could have been a very impressive browser game to one that looks nice but doesn’t play so well. It’s still full of fun and clever moments, but they’re often overshadowed by sheer annoyance.