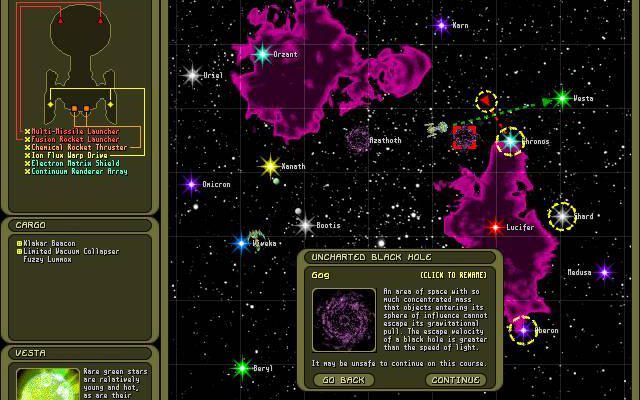 Strange Adventures in Infinite Space is a quick and addictive trip around the depths of space.

There’s a lot to be said for bite-size gaming. Huge, epic sagas that last hours on end are all well and good, but now and again it’s nice to dive into a game and climb back out again ten minutes later. Strange Adventures in Infinite Space supplies this hotfooted style of gameplay, granting you the opportunity to whiz around space in ten minutes flat.

With randomised worlds and encounters, space isn’t the only thing that is infinite – the replay value is through the roof, as no two voyages will look or feel the same. Strange Adventures can be a little difficult at times and a few extra modes wouldn’t have gone amiss, but this is definitely a journey into the unknown worth taking. 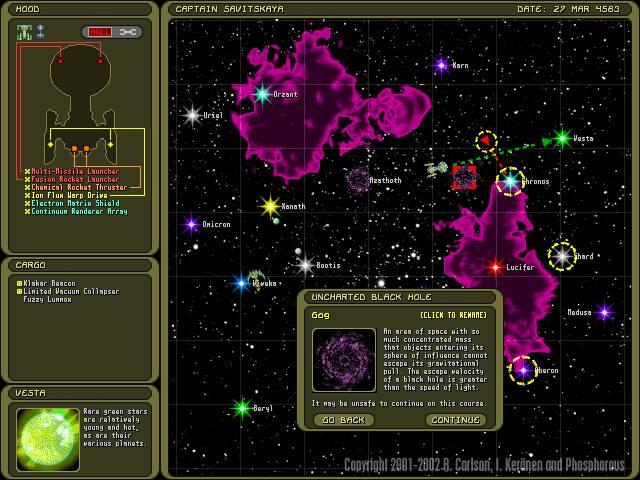 The various organisations and governments of planet Hope in the Glory system are at loggerheads with one another, unable to come to an agreement about who should be allowed to explore the surrounding planets and collect the wealth of treasure and resources available. While they’re all arguing, you decide to take all the spoils for yourself, and head out into space.

Strange Adventures in Infinite Space throws you right into the action, with simple controls and concepts. Players can click on any planet to travel to it, and once arriving will be given instructions on what to do next, depending on whatever has been discovered. Travelling uses up time, and you must make sure that you return back to planet Hope after roughly ten years, else you’ll owe a conman a lot of money.

After landing on a planet, one of the following will occur: You may find ship parts, or a new species to collect, or a treasure to steal, or perhaps a random event will occur. The idea is to grab as much loot as you can for selling back on Hope, boosting your final score to astronomical levels. Allies can also be found and added to your cause.

You may bump into alien races too, who are never friendly towards you. If you choose to engage in combat, the view changes to a combat simulator, where you can select your ship and tell it to attack, cloak or flee. Destroying enemies is very rewarding, as you’ll be able to explore the planet they were guarding, but it’s also very risky as the majority of enemies are far more powerful than yourself.

This is the concept for Strange Adventures in a nutshell – there are plenty of extra elements to the action depending on which items you find and events that occur, but it doesn’t ever get more complex than this. What makes the game so excitingly playable is the randomness of it all. Every game is completely different, with random planet placement and items to find. 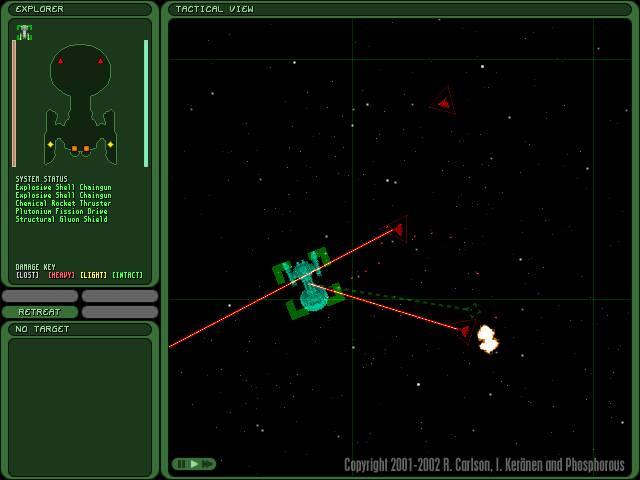 Since games only last around ten minutes each, it’s great for playing a quick game or two, but you’ll also be able to completely lose yourself for hours if you so choose. Every trip is saved on a scoreboard along with your name, the name of your ship and what your fate was. Trying to beat your top score with the perfect run through space is very addictive indeed, and the quick nature of play helps to broaden this feeling.

While it’s all very entertaining, the enemies are perhaps a little too overpowered. Most of the bad guys you meet will quickly destroy you if you haven’t first found some extra weapons and firepower, and choosing to avoid an enemy can waste oodles of time. It feels a bit like tiptoeing around a minefield, trying not to step on the planets with the lurking nasties.

It would also be nice if there were a little more variety where options are concerned. Apart from choosing the size of the solar system and how many enemies are about, there’s not much more to play around with. It would be great if you could alter the amount of time allowed for flying around, or perhaps increase the likelihood of a random event occurring.

Strange Adventures in Infinite Space is infinitely playable and we can see ourselves jumping in for a quick once around space for many months to come. The game is completely free to download too, so there really is no excuse not to check this one out.