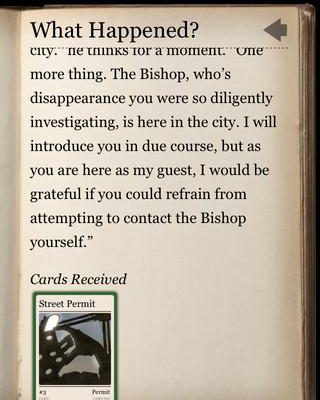 Storydeck: Steampunk is found in the App Store under Games, but we’re really not sure why

Storydeck: Steampunk is an interesting beast to get a grasp on. It’s not really a game. But I don’t mean that in the same way as when I say it about something like To The Moon or Dear Esther. Those are more artistic expressions that tell their stories through the construct of a video game. Sometimes I’ll even use the shudderingly awkward term “interactive fiction.” No, this is something very different.

Storydeck: Steampunk is a story, doled out in bits and pieces to the reader. You’ll read a small section of a story, usually only a few paragraphs worth. Then you’ll be given some cards based on what you just read. Sometimes they’re events, locations, characters, etc. When you reach one of those breaks you’ll “play” two cards from your growing deck. If those two are relevant to the story, then the next section loads up and the story continues. If not, the cards get put back in your deck and you try again. 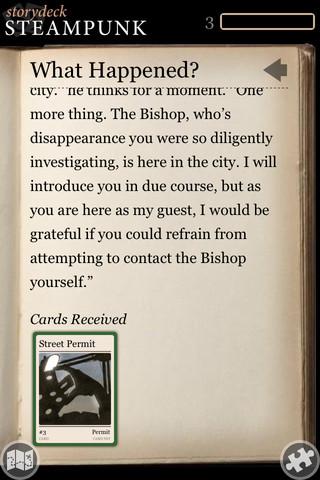 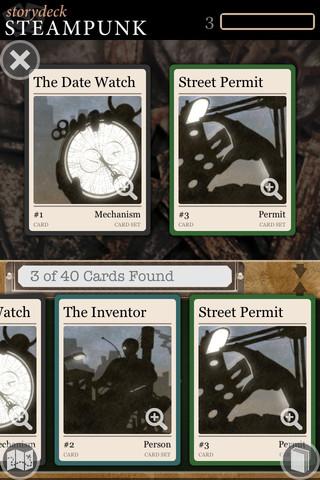 But there’s nothing really interactive about it. The story doesn’t really tailor itself to the cards you play, and there’s nothing good or bad about playing the right cards in any particular order. There’s no discernible way to succeed or fail. In addition, I’d argue that since this is just a story that you read through, it would be better in print form and not wrapped around the idea of it being a game.

The story revolves around a murder and shady characters that manage to travel back in time. It’s dripping with the Victorian era that pervades the steampunk aesthetic. It’s not a story that’s going to set the world on fire by any stretch, but it was interesting throughout, and in the end was pretty satisfying.

There’s some decent atmospheric music that plays while you read, and the layout of the onscreen text and the design of the cards fits into the whole steampunk thing. There’s a little bit of art on the cards themselves, but it’s usually in shadow so doesn’t really add much to the feel of the story.

I can be totally ok with the whole “is it or isn’t it a game?” argument. I love the idea of using the video game medium to tell a story in an unconventional way. To The Moon told a heartbreaking story against the backdrop of an RPG game, for example. But Storydeck: Steampunk doesn’t take advantage of video game’s storytelling strengths to do anything. You’re simply reading text, and flipping cards to continue telling the story. Even in the “games as art” discussion, what you’re seeing here just isn’t a game.