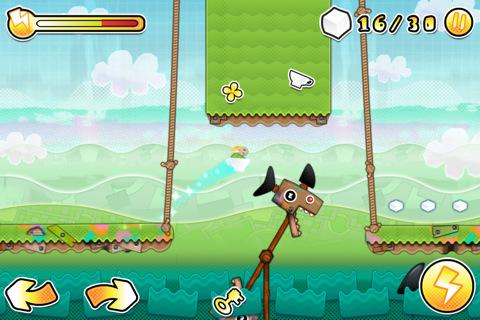 Storm in a Teacup is a variation of the saying “a tempest in a teacup” which really means taking a small event and blowing it out of proportion. Since it means making something out of nothing, I’m really struggling with why you’d name your game that. Good news though, the title is really the only thing about this game that’s not awesome. And that’s worth making a bit of a fuss over.

We’ve been pretty blessed lately on the iOS front. Pretty soon we’re all going to get spoiled by all the great game releases we keep getting inundated with. We’ve gotten excited about boardgames, driving games, etc. Now, we get to add a brand new platforming game to the list.

Storm in a Teacup’s controls are pretty straightforward. There are on screen controls to move left and right and then a button to “jump,” though it’s really more of a take flight kind of motion. You have a charge meter that starts to deplete the second you tap the button and take off. Once the bar runs out you start falling back to the ground and the meter refills. You can double tap to boost higher, and building up speed before launching will definitely send you further.

You’ll use this jump to navigate obstacles and avoid pitfalls, collecting keys and triggering little contraptions to move your way through the various levels. So really, all the standard tropes you’d find in any platformer, except it puts a heavily reliance on its use of physics in the game world. As such, you could safely say the game took some of its inspiration from titles like Little Big Planet. Because both you and the objects you interact with are supposed to convey weight and momentum, the controls feel a bit floaty. And while I’d usually hold that out as a negative, here that’s not necessarily the case.

I’ve always been a little stand offish when it comes to platformers on the touch screen, I feel like there’s some precision that’s lost in not having buttons available to you. I still think that’s the case, but Storm in a Teacup‘s floaty-ness plays to the touch screen well and what would be a negative on the consoles really feels more like a positive here.

This is one of those cases where the game seems to have been changed in order to accommodate a witty title. Why is the character onscreen named “Storm” and why does he fly around in a teacup? Cause it fits the name of the game. Don’t get me wrong, it works gameplay wise, it’s just that it makes zero sense in the game world or reality. 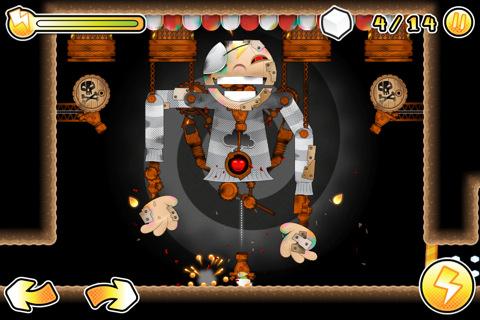 Speaking of “game world” Storm in a Teacup continually dazzles with its style, looking like something a child would dream up. Mean dark clouds have sinister frowns, platforms are tied up by rope, and some enemies look like they’re made out of cardboard. It’s adorable and trippy all at the same time. It also translates excellently to both the iPhone and iPad, looking gorgeous on both platforms.

But don’t be fooled by the cute look of the world, this game gets hard with a capital H. Storm in a Teacup will look to test even the most veteran platform gamer’s skill and patience. Luckily the game is never unfair about it, and you’ll never find yourself in a place where you can’t see because of a bad camera or faulty level design. You can always see what you need to do, it’s just a matter of making it happen.

With the exception of the name, which is cute, but when taken at it’s meaning does a disservice to the game, I have nothing bad to say about Storm in a Teacup. It’s gorgeous, controls well and offers a good solid challenge. I’ve played a lot of games that I’d consider a tempest in a teapot, but Storm in a Teacup isn’t one of them. This one is a big deal.