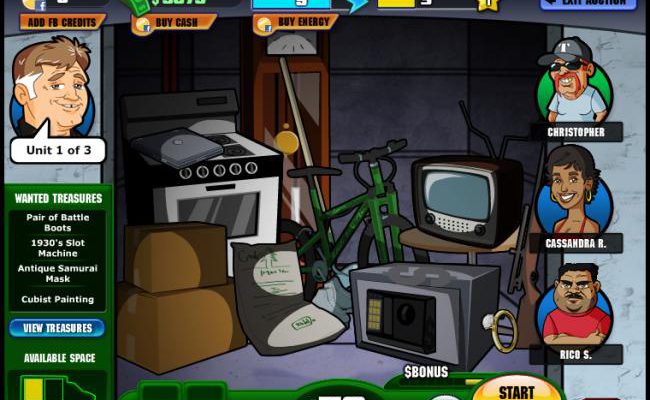 A&E auctions off storage units on Facebook with Storage Wars

More and more television networks are investing into social games to promote their shows, and now, A&E is doing the same with the Facebook title Storage Wars. Promoting the show of the same name, the application is more than some slightly interactive advertisement, but actually fun in its own right. A quasi-hidden object game, it is a title in which players devise bidding strategies for cluttered storage units in an attempt to turn a profit.

Storage Wars is basically an auction-style game mixed with a bit of hidden object play. Visiting different maps that contain a myriad of storage buildings, your goal is to outbid two other non-player competitors and earn a greater profit. The catch is that there are three units per building to bid on, but they are filled with so much junk that it can be difficult to discern which are worthless and which are valuable. 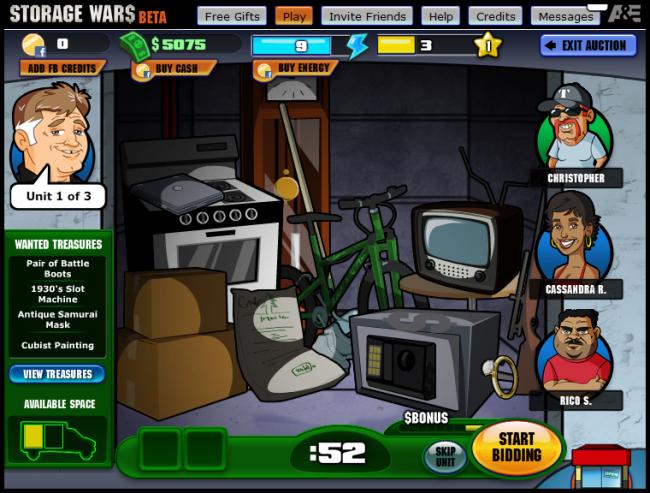 At the cost of slowly recharging energy, you are able to enter a storage facility and bid on each dimly lit room. The big catch, however, is that the truck you use to carry all the junk has only enough room for two. When an auction is about to begin, you are granted a short amount of time to appraise what is in the space and gauge its total value. Upon examination, you will be given select, special items to find that will pretty much guarantee a profit. The problem is that they are often barely visible (usually partially hidden behind other objects). Additionally, you can search for hidden dollar signs, which will boost experience and monetary rewards after enough have been discovered.

Should you choose to bid on an auction, a set value is chosen and you merely have to click “Bid” to pay the price. The other two NPCs will bid as well, and you will have the option to bid again, or pass. Should you keep bidding and win the auction for the storage unit, you will get to clean it out and see what profits or loses you have earned. And should you ever have a spat of poor judgment and run out of cash, more is earned every 24 hours.

There are power-ups that can be bought before each auction that help in appraising total value. These include perks that give an estimated value per item or a better flashlight to illuminate the darkened space a bit more. Even so, most of the challenge simply comes down to attention to detail and it is highly gratifying when your instinct proves correct and you discover the special items and turn a significant profit.

After all three storage units have been bid on, and the player walks away with the top earnings, another building will unlock. On each map, there are a select number of these, and once all have been completed, you can challenge the “boss” of the map (he or she typically just spends more money) for an auction. Should you win, the next map and set of buildings will become available. 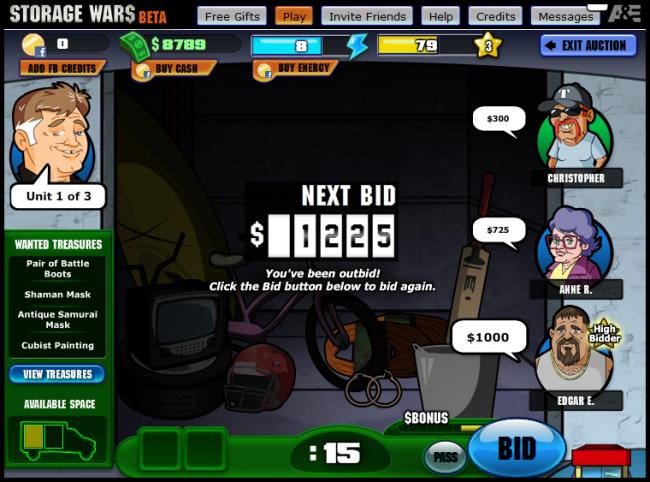 The only real downside is that Storage Wars misses out on are some potentially great social mechanics. As it stands, the only thing it contains is standard leaderboards, Facebook Wall postings (to share earnings and achievements), and the gifting of cash, experience, or energy. It is a true disappointment that there is no semblance of synchronous or asynchronous bidding against friends or other users. It would be so much better to have the option to bid against other, thinking, human beings. As it stands, the NPC opponents are very easy to beat; though that may change at significantly higher levels.

Nevertheless, this wishful thinking does not degrade the quality of Storage Wars in any significant manner. Fact of the matter is that the game is fun either way. The only other, nit-picky, issue that can really even be considered is that energy runs out very quickly, and play sessions feel over before they even begin. A&E’s new title is impressive, especially considering that is meant to be a promotion. Simple, easy to learn, and fairly original, Storage Wars is worth your time whether you’re a fan of the show or not.