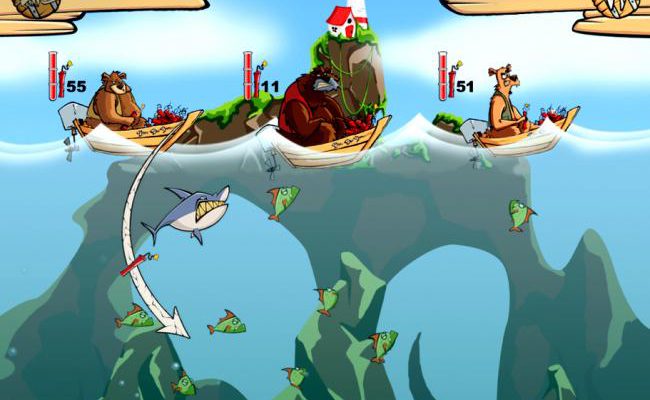 It’s official: arcades are back, except now they’re virtual and on your favorite mobile devices. With Stop Those Fish, Eye Interactive adds one more chain in the link of pay-to-play time wasters, helping to strengthen the reliance mobile games have upon in-app purchases.

Stop Those Fish is a story about three bears, but Goldilocks has left the building. In this particular adventure, your bears are out boating, and the fish have stirred up something of an uprising. Each of your bears will man their own vessel, armed with dynamite. You’ll need to keep the fish at bay lest they damage and ultimately sink your boats and your bears. It’s a cute concept with novel gameplay, but the overall package simply isn’t compelling enough to justify the cost.

As is typical of this sort of casual fare, Stop Those Fish is divvied up into bite-sized levels. Your bears are spaced evenly along the surface of the water, and you’ll need to draw lines from your bears to the fish in order to blast them with dynamite. In the game’s latter levels, new types of fish will try to outsmart you, changing up their swimming patterns, and anticipating their position offers ample challenge.

In terms of control, Stop Those Fish feels satisfying, and placing dynamite is painless and fairly accurate. Each bear has its own ammo and health bar for its boat, requiring you to be strategic with your firepower. Placing dynamite in the path of multiple fish will land you combos, which earns you additional gold. After each level you’ll be given an opportunity to use that gold to repair your boats and/or purchase additional ammo and upgrades.

It’s a solid system, but the gameplay quickly wears thin, and Stop Those Fish wastes no time in ramping up its difficulty. Before long you’ll see a clear need for upgrades that require either real-world money or copious amounts of grinding. It’s a formula we’re becoming all too familiar with on the App Store, one that harkens back to when arcade games were intentionally made impossibly difficult to encourage players to continuously pump quarters into a machine. 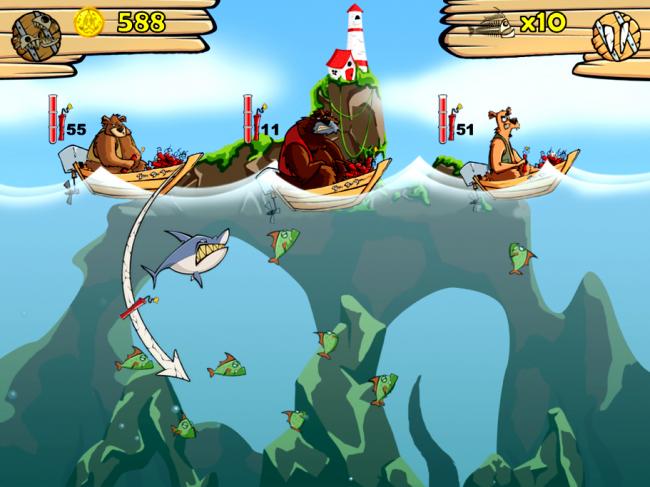 Visually the game offers an attractive, if not generic, package. There is a significant amount of variety in terms of level backgrounds and fish sprites, and the animations are fluid. The music is fitting, though I would have appreciated the addition of more exciting sound effects.

Game makers need to make money, and as a gamer, I’m generally willing to throw it at them for a quality product. Stop Those Fish, however, is just one more example of trite content demanding hefty tariffs for continued play. The game isn’t all that fun to begin with, and ramping up the difficulty in hopes of shaking players down for IAPs is just insulting. If you bite at this app, you’re merely getting hooked by another bait and switch.