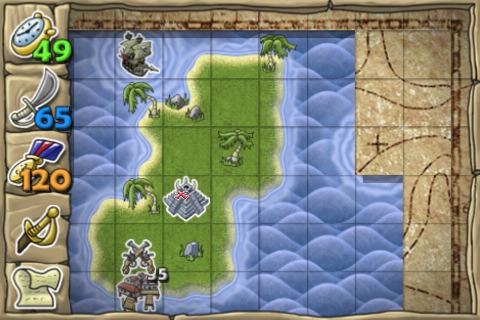 While playing Stoneship it actually took a little bit for me to realize that the pirates in the game were the enemies and not who I was playing as. I guess my love for pirates and the natural cultural inclination to romanticize them just left me with the assumption that if anyone here was gonna be a pirate, it’d be me. Alas, there are no ARRRR’s! to be uttered from the players… instead when you hear that, it usually means a battle is coming.

Stoneship is a strategy puzzle game that really feels like it’s turn-based, though I’d argue it’s not (which I’ll explain in a minute). In each round your objective is the same, survive the pirate attack. When the round starts you’re presented with a totally covered up map divided into squares. You have a finite number of turns before the pirates come and attack, and to prepare you need to uncover tiles, set up towns, find the invasion point if you can, and hopefully take out the sea monster before the inevitable attack.

While uncovering tiles, if you find any towns they instantly become yours to protect, and you get the population there as a resource. If you tap on towns you can expand their influence (as the expense of a turn) to link as many separate towns as you can in order to share resources. This will all help when the attack needs to be fended off.

I’ve mentioned before that it feels turn-based, but isn’t. The reason I’d argue this is that you take a ton of turns in a row as you build up, then the pirates get one big turn at the end when they attack. The main strategy comes from never having enough turns before the attack to do everything, so while discovering terrain you need to try conserve as many turns as possible. Just tapping away tiles like crazy is going to run you out of turns before you’re ready, so you need to take your time and only uncover the tiles that (hopefully) matter.

Tap some tiles to uncover territory, find settlements and crew. Track down sea monsters and dispose of as soon as possible. Find pirates before the attack to see where they’re headed first and just fill that town with as many defenders as you can. Rinse and repeat. The terrain you’re dealing with changes each round, but it’s not random, so if you get caught high and dry you can make a mental note of the location and important bits and try again (with a substantial upper-hand).

Along the way you’ll meet various crew members that would like to be your first mate, and you’ll be able to choose one at the beginning of each round. They give you various enhancements like more turns or speeding up crew recruitment. Some levels benefit from choosing these different abilities, of course you rarely know that before you start the level – but it does help when you have to restart.

The campaign mode encompasses over 80 levels, which is more than enough to keep you busy for hours. And as of now they are planning on adding even more to the mix. In addition to the main campaign there is a challenge mode if you’re more in the mood for one-off battles.

The only real bummer with Stoneship was just how redundant the game felt after only an hour or two of playing it. After taking some breaks, though, I managed to come back feeling refreshed for more. This is a great strategy game offering up tons of good fun – just try not to play a bunch of it at once.