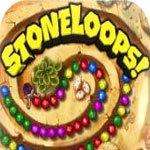 Okay, I'll admit that with a funny name like StoneLoops! Of Jurassica (what is a stone loop anyway?) and screenshots that look like Zuma or Luxor, I had fairly low expectations for this very popular iPhone game. Wow, was I pleasantly surprised to find that not only is StoneLoops! Of Jurassica worthy of being mentioned in the same sentence as its more famous predecessors, but also the entire package adds up to brontosaurus-sized fun!

As its name implies, you are basically traveling through the 5 levels of Jurassica, a name which stems from the scientific term “Jurassic” which is part of the Mesozoic Epoch, occurring from 190 to 140 million years ago, and characterized by an abundance of dinosaurs .You begin in a wild jungle and progress through other worlds, including a volcano and a glacier.As you complete levels, you get to own a house in each level, and you can collect 24 different trophies as you go along. The building-a-house aspect is a welcome respite from the constant shooting and blasting of stones.

Even if you've never played any match 3 or “marble-shooting” games before, you'll catch on quickly. The developers have created very smooth, easy-to-use and accurate controls. Some iPhone games struggle with the sensitivity of the touch mechanism, but Stoneloops! Of Jurassica excels. After playing for just a few minutes, I felt like my finger was fluidly moving to the instructions of my brain without any interference from the technology. Not only are the controls intuitive, but also you have a wide range of choices. You can either tilt, or touch the screen or use buttons to control the stones.I liked to touch the screen and tilt the best.The kind developers also included an “aim” helper so that I could actually hit what I was aiming for.These types of game are not my strong suit, so I greatly appreciated the extra help.

In addition to the varied control mechanisms, StoneLoops! Of Jurassica also offers two modes of play:”Classic” and “Grab and Shoot.”Both are fun and easy to figure out how to play, but the “Grab and Shoot” mode is really unique. The classic mode is essentially the same as your basic marble popper, but “Grab and Shoot” allows you to grab a stone from the impending loop and shoot it back where ever you choose. Once you get the hang of it, this new twist on the game play adds a nice dimension to the fun.

I loved the creative power-ups packed into this game such as the Storm (a lightning bolt that cuts through the stones); the Spear (shoot the spear to destroy stones); the Stop (stops stones for a few seconds so you can get caught up on shooting them). I used them frequently when I got in a pinch.

The sound and music in the StoneLoops is superb. It truly adds to the prehistoric look and feel. The graphics are top notch. With 75 levels of increasing complexity through five environments, the current “75% off” price of 99¢ is a terrific value. Even if you're not a fan of dinosaurs, you can't help but enjoy the jolly good time you'll have romping through the Jurassic age.