Stone Age: The Board Game Review 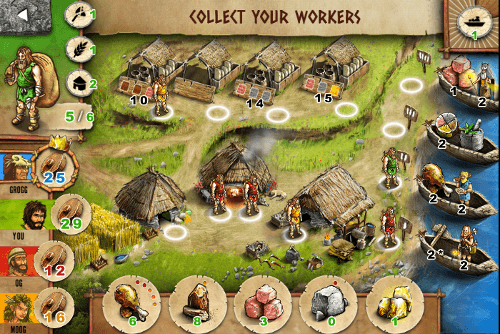 Once upon a time a game designer invented a bizarre version of prehistory in which tribespeople could eat clay and plate their mud huts with gold. He named his game Stone Age and it drew praise for its enormous amount of workable strategies and ire for its silly theme and lack of interaction. Now we’re in the phone age, and the game is here to make its iOS debut.

Stone Age is a worker placement game in which you take members of your tribe and assign them to various activities such as gathering resources, dealing with traders and building gold-plated huts. You can also put them in the oft-ridiculed “mating hut” to increase your worker pool, but more cavemen need more food, one of the resources. Unlike most worker placement games, dice play an important role, as each worker assigned to collect resources gives you a die and the total rolled divided by the scarcity of the resource – 2 for easily obtained food, 6 for rare gold – determine the amount gathered.

The cleverest thing about the design is the variety of ways to increase your score. Building huts with rare materials offers points, but so do many of the traders who visit your tribe on the nearby river, asking resources in return for their wares. From them you can also collect a number of technologies, which further boosts your score, and specialists who don’t work but act as a multiplier on other variables in the game such as fields ploughed or tools made. There’s no easy or straightforward path to victory, and players must keep a constant eye on their own and others’ resources.

This presents something of a problem in this iOS edition of the game because there’s a lot to keep track of, and the cramped interface isn’t quite up to the job. You can see everything you need to keep your little nation ticking along turn by turn, but the essential bonus points and the various resources gathered by other players, are hidden from view. They’re not hard to find if you go looking, but it’s a little irritating not to see them all the time.

There are a few other minor interface issues too. The text is rendered in an odd font which is sometimes hard to read, and the dragging of workers to their assigned tasks is clumsy and inexact, although this is merely annoying rather than truly problematic. Graphics are serviceable, but basic. The sound is excellent, the whole game throbbing to the primal rhythms of primitive drums and guttural chants. 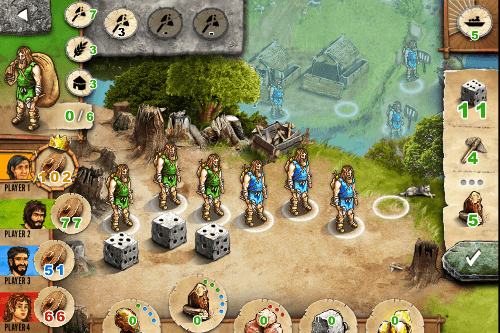 Aside from the rather daft application of the theme, I had a bit of an issue of the physical version of this game which is that I simply didn’t find it very exciting to play. Players take a little while to resolve their turns and there’s no interaction in the game except blocking access to resources other players need. However these are, of course, non-issues in a mobile version of the game where play is rapid and there’s little satisfaction to be obtained from interacting with an AI. Provided they get all the play options right.

And I’m happy to report that Stone Age does just that. The AI is available at multiple levels and is fully capable of challenging competent human players. There’s a pass-and-play mode to use against your friends face to face and an asynchronous play option for when they’re far away. Again, there are minor usability niggles but everything works as it should and will provide a satisfying experience for fans of the game and new players alike.

If you are new to the game and a little concerned by all the different things there are to keep track of, have no fear. It is a moderately complex game but the included rules are well written and clear, and there’s a good tutorial to help you learn them. Be warned that the AI won’t handle you with kid gloves once you’re left to complete your first session of the game alone. 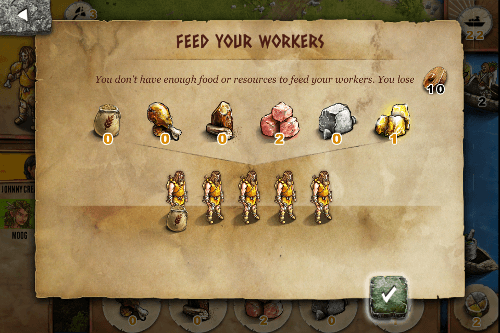 It’s a shame the developer couldn’t find a better way to put everything at your fingertips, but it’s a necessary sacrifice to make the game iPhone compatible rather than iPad only. And I understand a universal update is in the works. Stone Age on mobile is a great way to overcome some of the shortcomings of the original design and experience the clever design of this game, the way it balances a little randomness with a dazzling array of deep, workable strategies to plan your play around.