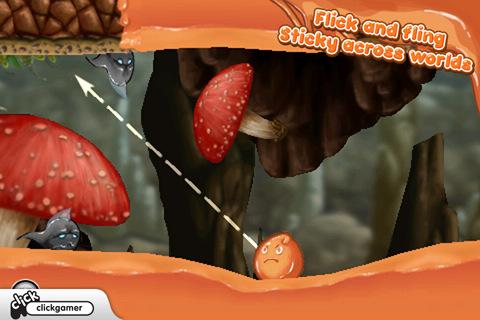 Sticky starts starts out with a fun concept, but quickly devolves into anarchy

It’s with no small sense of irony that Sticky has the feel of an experiment that’s gone ever so slight awry. The tale of two professor’s vain attempts to serve up a solution to the world’s impending energy crisis, the result is not the wondrous substance with enough power to keep the lights burning for the next century they were looking for, but rather a Sticky, round, orange blob.

Sticky is firm proof that all the promise in the world counts for nothing if the delivery isn’t there. That’s a theme that runs throughout Sticky, in truth, with the game coming to the table with all the right fixtures and fittings, but an experience that’s sadly found wanting when play begins to ramp up.

Problems with Sticky certainly don’t stem from its story. Delivered with an abundance of charm, the game tells the tale of the aforementioned professors’ calamitous experiments and the fallout that results. While Sticky himself is most certainly a positive by-product – a rather cute orange splodge that the game charges you with flinging about stage after stage in true Angry Birds style – the more sinister side effect is a series of black blobs, or toxins, intent on overrunning the planet.

In short, this is a game of one globule versus the onslaught of a whole army of other globules. Your aim is to stop the invading black blobs from making it to each stage’s exit, the equally glutinous walls that make up the bulk of each level acting as slingshots – pulling back with your finger enough to send Sticky flying.

When the battle heats up – scores of toxins entering each stage en masse – there’s something of Sonic the Hedgehog‘s boss battles about Sticky, with bouncing on the head of each foe enough to wipe them from play. As such, success is a case of making quick decisions and getting your angles right.

While the game is kind enough to predict Sticky‘s flight path for you, if you panic and send him flying without setting a clear target, you’ll soon find you’re overrun.

Indeed, Sticky is one of those games where, if you lose concentration for a second, it’s very hard to get back on track. As the stages passes, the breeds of toxins multiply – some dwarfing you in size and requiring several hits before they’re conquered, others crowding around you and latching on to block your line of attack. It’s safe to say, Sticky is the very definition of hectic gameplay.

But while toppling your ever enthusiastic enemy initially seems a fair enough task, Sticky‘s approach simply doesn’t fit its surroundings. The early levels – which essentially take the form of one long corridor – are the perfect playground, but as soon as the stages begin to branch out, increasing in both size and form, controlling Sticky begins to become something of a nightmare. 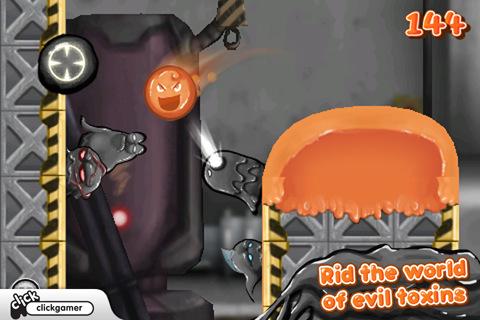 Some of the power ups on offer, for instance, are made redundant. An early bonus that allows you to freeze toxins – a follow-up tap enough to smash them up – is botched, simply because the sheer momentum of play means you’re often on the other side of the screen and out of range when said tap is required.

It also becomes increasingly difficult to navigate around the vast scape that some of Sticky‘s stages offer, with what starts out as a fairly perky encounter slowly slipping into something approaching anarchy. That might sound exciting, but when Sticky makes simply travelling a few yards an ordeal, it soon becomes apparent players have been offered a raw deal here.

Considering the game initially shows so much potential, the only way to make some sort of sense of what’s gone wrong here is to pin the blame on the game’s delivery. With the developers having got carried away, adding element after element without checking to see if they actually gel, Sticky‘s sorry legacy is to serve as a lesson for all those that follow: however decent your idea, it’ll count for nothing if it’s played out in a less than suitable setting.