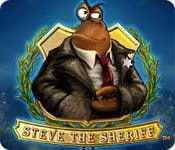 Steve the Sheriff is a lighthearted undersea hidden object game with a good mix of inventory puzzles and a variety of mini-games. Fifteen buildings with multiple rooms offer reasonable length, and clever updates to “find the differences” puzzles round out the package. Excellent integration between types of play give the game a fresh feel.

Spongebob Squarepants would be right at home in Neptuneville, a small Western town populated by squid, jellyfish, sharks, and other deepsea denizens. Cartoon logic applies: the Sheriff smokes cigars underwater, a charming lady jellyfish keeps pet shrimp in an aquarium, the local museum is dedicated to cowboy lore. But, as with Spongebob, it all works, and much of the fun comes from tiny details in each scene. Steve is after a gang of burglars who committed a one night crime spree throughout the usually sleepy town, including stealing the Neptune statue from the Town Square.

Gameplay fits the new genre of hidden object combined with point and click adventure. You find objects using a typical Find List, but some go into inventory to be used later. Steve the Sheriff takes this one step further than most recent titles, fully melding the two activities. For example, you may have to find objects to repair a generator so you can turn on the lights – and then, once the lights are on, find more objects on a new Find List for the same scene.

The game also does well in showing just part of an object yet still keeping it recognizable. Whether it’s the fingertips of a glove or the right side of a key you can still tell clearly what it is, but it makes the hidden object search both challenging and satisfying. Objects are mostly appropriate to their setting and properly sized, a nice change from the 16 foot tall popsicles and miniature Eiffel Towers that some HOGs use to confuse players.

Many locations start with a Find the Differences game, which lets Steve compare the setting before and after the crime spree.  This gives him clues to the overall mystery as he tries to track down the Neptune statue. The game really shines here. Most previous Find the Differences games fell into one of two categories. In one, the differences were a simple presence/absence test, with one view having a candle where another had an empty shelf. The other went for miniscule differences, a slightly different drapery fold, a tiny bit longer hemline.

Steve the Sheriff updates the genre with many differences that fool the brain but don’t strain the eye. A book is in the same place, but is open in one view, closed in the other. Two similar brown hats have their positions reversed from one view to the next.  A mermaid statuette in one is a Buddha statuette in the other. Finding these differences delivers the same kind of satisfaction as a quality Hidden Object Game.

The mini-games aren’t memorable, but do add even more variety. In several rooms, you  need to find multiples of an object, for example 10 tubes of paint. Finding the last of these will usually open a minigame with a related theme. These include some jigsaw puzzles, pairs matching games, pattern sequences, and a few more. Any can be skipped without penalty.

The game is not without flaws.  Instructions could be clearer in some sections. There are some translation errors (“lamp” is consistently used for “lightbulb”), but the hint system has a silhouette feature that helps overcome these. Two of the rooms share the same annoying fault. You have to find multiples of an object, and, although you are only asked to find 10, there may be 14 in the room. This just seems to be a flat out error.

The game has only a minor points penalty for inaccuracy, but it is still irritating. However, it’s not a problem everywhere in the game. If you’re looking for 10 bottles and you click on one that isn’t accepted, just go on and click on another one. There’s very limited replay value as the objects are always in the same place. Still, that can be forgiven in a game which is this satisfying the first time around.

All in all, Steve the Sheriff a fun game to play, and an impressive accomplishment in integrating several different game styles. Both Hidden Object, with the partial object reveals, and Find the Differences deliver real advances in gameplay. It doesn’t feel new, but it does feel fresh, and players who enjoy these genres can settle in for a highly-entertaining mid length game.

The Color of Murder: A Carol Reed Mystery Review