Home / Reviews / Steve the Sheriff 2: The Case of the Missing Thing Review

Steve the Sheriff 2: The Case of the Missing Thing Review 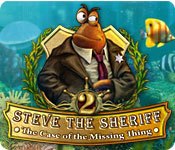 After putting the wily Octopus behind bars, Steve the Sheriff is looking forward to taking it easy. He’s been given the honor of cutting the ribbon on the Neptuneville Museum’s newest exhibit, the Mona Meduza, but before he can so much as sharpen the scissors, the painting is stolen. A lawman lobster’s work is never done.

So begins the hidden object game Steve the Sheriff 2: The Case of the Missing Thing. To track down the slippery culprit, Steve will have to search high and low throughout the city, searching several different locations for clues. In each area, he’ll have a list of objects to find, as well as a single cigar, which will be added to Steve’s collection.

The underwater locations are wonderfully detailed and gorgeously rendered. The items are usually very easy to find – no tiny pixel hunting here. The hand-drawn art is vibrant and colorful, and objects are large enough to be spotted without trouble. I was dismayed when "5 paper clips" showed up on one of my lists, but was pleasantly relieved by how easy they were to identify. If you do find yourself stuck, clicking on Steve’s cigar will send a puff of smoke toward your desired target.

The list hunt is pretty standard HOG fare, but each location will also have at least one area marked with bubbles that requires Steve’s special attention. Clicking on one of these bubble spots will bring up a picture of Steve pondering the items he needs to unlock that area. To put out a fire, he may think of a fire extinguisher; to clear up some trash, he might imagine a dustpan and broom. Dragging the items over to Steve unlocks the bubble spot and reveals one of the items on your list, or  a clue that furthers the Sheriff’s investigation. It’s a fun and interactive twist on object searching – I almost wish the entire game was like that.

Steve will also usually have to play a mini-game or two in order to clear a room. He might find the game by unlocking a bubble spot or by finding pieces of it scattered across the room. The mini-games are the expected variety  of tasks, such as jigsaw puzzles and find-the-difference scenes, but like the rest of the game, they’re beautifully drawn and well constructed. You can skip them if you like, but none of them are overwhelmingly difficult or take too long.

The biggest problem with Steve the Sheriff 2 is that the lists are very repetitious. For a town populated by sea creatures, Neptuneville is overrun with gloves, and the citizens seem to be more than a little obsessed with bells, axes, and irons. You’ll find yourself looking for the same objects over and over again, and although they’re drawn differently every time – a real plus – if you’ve found one belt, you feel like you’ve found them all. It’s a shame that a game as truly pleasing to the eye as this one couldn’t have come up with a little more variety. Scenes seem to take a bit longer than you’d expect to load, too, and can be sluggish to respond; at times, I actually thought the game had frozen up.

Steve the Sheriff 2: The Case of the Missing Thing is a very relaxed game, with no timer to race and not much challenge to the searches. Its fishy characters are silly but charming, and you’ll be wowed by the art, especially the close-ups of the characters. It’s perfect as an introduction to the genre, or for anyone just looking to spend a pleasant afternoon.