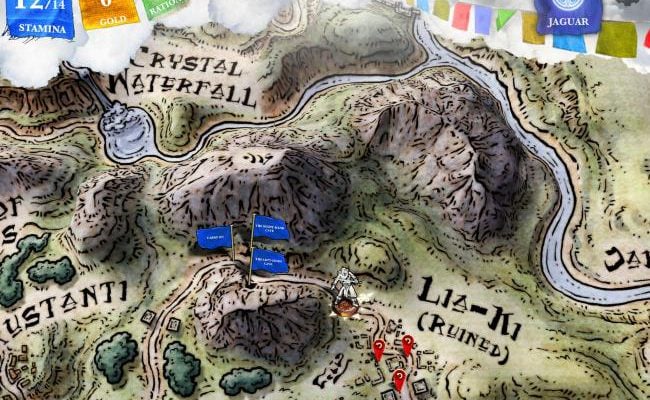 Calling all fantasy storybook fans: do we have the game for you!

Sometimes I feel like I’m wasting my time writing a review when I should really just be pointing at a game and demanding that people play it. This is one of those times. Steve Jackson’s Sorcery! is an absolutely marvelous fantasy storybook adventure. Lushly illustrated and expertly told, it should not be missed by anyone even remotely interested in the genre.

That’s a hard sell, yes, but Steve Jackson’s Sorcery! – actually the first of a planned four parts – lives up to it. The introduction, which begins with a dreamlike description of the lost Crown of Kings, sets a wonderful tone, with roiling clouds, rich music and deft prose; and as the detailed, hand-drawn map of the Shamutanti Hills slowly fades into view, it’s hard not to think that you’ve got something special in your hands. 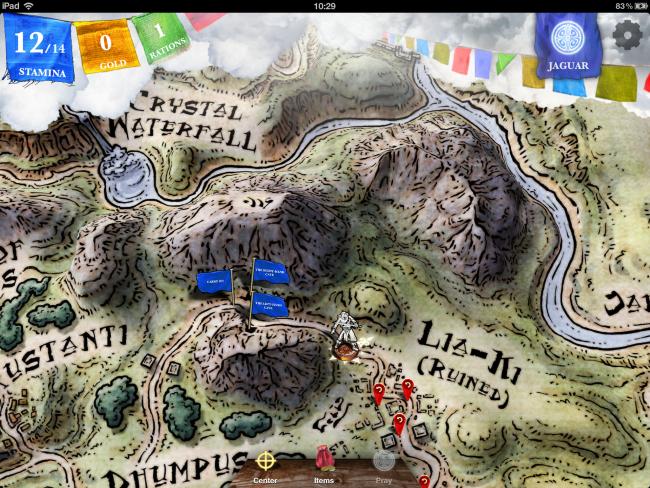 The map itself is worthy of attention and a good place to start. It’s presented as a framed painting of a Tolkien-esque land that can be panned or zoomed at will, and while it’s very pretty in its own right, a closer look will reveal a subtle, yet very impressive 3D effect across its mountains and valleys. Your character is represented by an unmoving, monochromatic figure standing on a small pedestal, rather like a fantasy chess piece, which can be moved across the map by simply drawing a line from its current position to a desired location.

Each new location will present you with choices: another direction to take, a building to enter, a conversation to have, a monster to fight or avoid, or something else entirely. Each choice leads to a different outcome, some good and some not, and assuming death doesn’t take you, a new and different set of choices. If you happen to find yourself in an untenable position (or just want to see what would happen if you did something else), you can “rewind” the story to any previous juncture, including all the way back to the very beginning or to forks in the road you didn’t take. This is a game that doesn’t punish making bad choices, but instead rewards exploration and a willingness to take chances.

Combat can often be avoided, and when it can’t (or if you’re the sort of adventurer who likes to pick fights), luck becomes a factor. There’s a strong element of strategy involved as well, as you try to guess your opponent’s move in turn-based battles and then react accordingly: attacking or defending in postures that will preserve your stamina while eventually reducing his to zero. There are also 48 spells of various sorts laid out in a suitably lavish spellbook, each with a fairy tale illustration, a description of the spell’s effects and a list of necessary ingredients where required. It’s unfortunately cumbersome to use, as there’s no way to search for a particular spell name or effect, and only certain spells are available at certain times in a system that’s never clearly explained; but it’s so nicely put together and ties in so well with the ambiance of the game that many players will no doubt find the inconvenience easily forgivable. 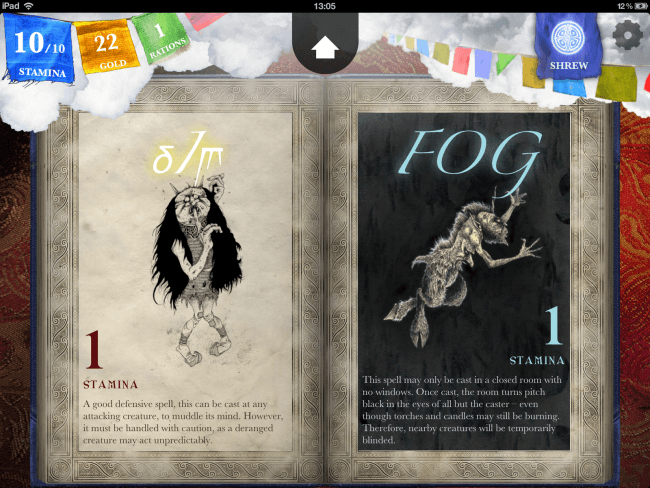 And then there’s the story, upon which everything balances. Crafting quality fantasy fiction is not an easy thing, but Sorcery! nails it with concise descriptions of scenes and creatures, and dialog that evokes the otherworldly feeling of high fantasy without stumbling into unnatural awkwardness or blathering exposition. It is admittedly a very conventional Dungeons & Dragons-style fantasy realm, but it doesn’t linger on the details, and that brevity works in its favor by helping it avoid excess clichés and stereotypes.

The whole package is tied together with a very fine attention to detail. Spellbook aside, the interface is simple and accessible, and the quality of illustration in everything from the map to the combat sequences, and even the inventory screen is absolutely top-notch. Just as good are the ambient sounds, like the background chatter and buzz of towns, and the caw of crows or the babbling of streams that really bring the game to life. And even though you’re ostensibly the hero of the game, you can do some awfully unheroic things on your journey – although whether for good or for ill is up to you to discover.

Perhaps the highest praise I can offer is that this is one of the very, very few games, and certainly the only one in recent memory, that gives me second thoughts about my otherwise happy and contented membership in Team Android. If you have any kind of interest at all in fantasy fiction or role-playing games, you simply must play Steve Jackson’s Sorcery! It really is just that good.

Monaco: What’s Yours Is Mine Review