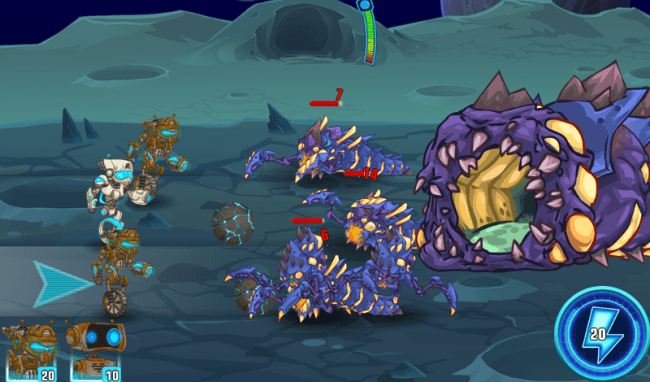 The Mothership Stella has been awakened. Ore and nova crystals have been found, two elements necessary to create new bots. Before the celebration can commence, the war begins, pitting machines and alien creatures against each other, in a fight for control over the valuable resources. So begins Stellar Wars, an elegant combination of a strategy game, a resource management sim, and a good old fashioned combat title rolled into one beautiful mobile package.

Stellar Wars is split between two major areas: combat and upgrade management. Combat takes place in a 2.5D environment marked by three lanes where your troops and enemies will meet for battle. Gather ore in the background by deploying a Minerbot, and then get to work setting your troops on the field. The ship rests on the side of the screen and deploys units as quickly as you can gather the ore to pay for their creation. Once activated, send them forward to battle aliens and gather energy and ore from the screen. Swipe to change lanes, a tactic you can use to sneak up on certain enemies as well as avoid long range attacks. You can team up on foes, run at them from behind, or command your entire army at once using menu options. You certainly won’t feel helpless in combat, but don’t think Stellar Wars is going to just hand you a victory, either! 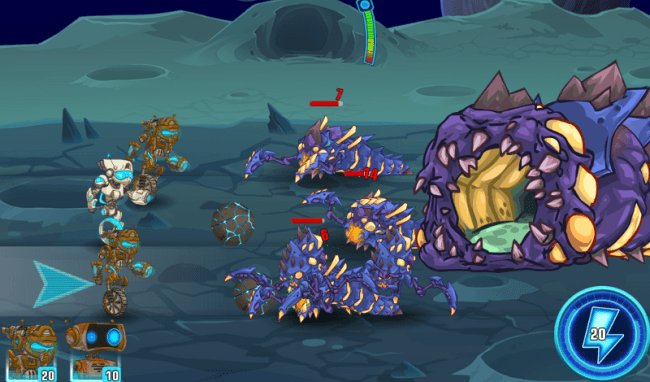 After battle, take your leftover ore and head back to the Mothership to participate in Stellar Wars‘ immense upgrades system. Here you can beef up your lander, upgrade your mining and attack bots, or purchase ship drops to help you out in battle. Managing upgrades is where the strategy part of the experience comes into play, and how you spend your points makes a huge difference when it’s time to head back to the battlefield. Purchasing new units requires nova crystals, while upgrading components of bots requires ore. Think hard before you spend either one!

Beyond the basics listed above, Stellar Wars features the occasional sidescrolling shmup interlude that lets you pick up some extra ore each time you land on a new planet. Nothing too challenging, just a nice change of pace to keep you glued to the screen. In-app purchases are confined to ore and nova crystal packs that include hefty sums of each material. You can also grab an ore doubler, which isn’t a bad decision if you want upgrades to move at a faster rate. 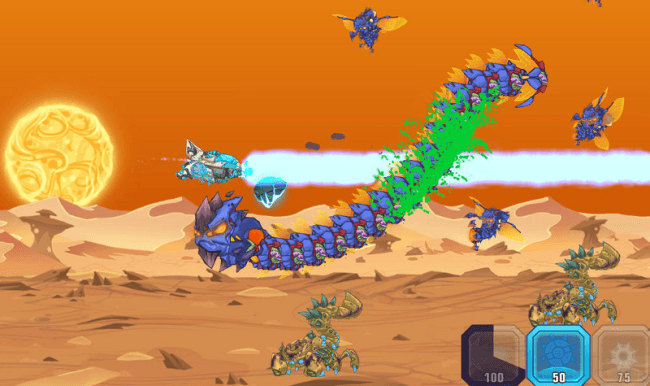 Stellar Wars brings a lot of style to the simulation/combat genre. The lighthearted sci-fi setting is a very welcome change from the generic fantasy world with knights and elves and swords. The interface suffers from a tiny bit of lag, something you’ll notice each time you tap a menu option or attempt to fly through the upgrade screens. There’s also a fair amount of loading screens to sit through, but nothing that destroys the pacing of the game.

Stellar Wars looks and plays like a greatly improved version of Legendary Wars, the development team’s previous release, with a lot of new units and upgrades to toy around with. Beautiful graphics and animations combined with large enemies and massive bosses give the game an epic feeling. The resource management meets combat gameplay is as smooth as ever, creating a game that will grab you from the start and keep you hooked as long as there are new things to upgrade!

LEGO The Lord of the Rings Review