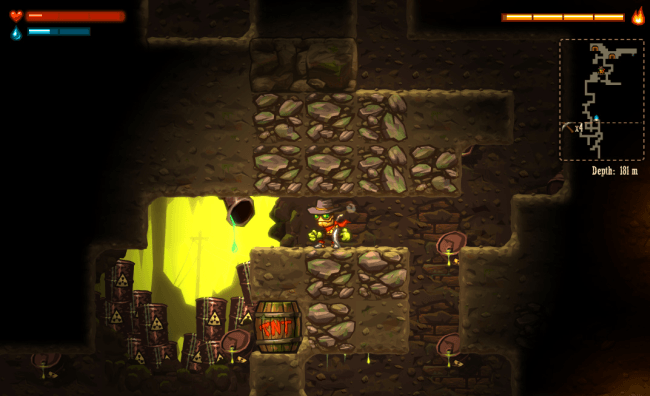 A shiny gem beneath the surface

One of my favorite Nintendo 3DS games of the year has made the surprise transition over to PC, meaning that those people who don’t own the latest Nintendo handheld can finally see what all the fuss is about. SteamWorld Dig really is as fantastic as you’ve heard, and it is very much in your best interest to grab a copy as soon as possible.

Imagine the world of Terraria, crossed with the ability-collecting nature of the Super Metroid series, and then coated in the most gorgeous HD visuals for good measure. SteamWorld Dig will engross you from start to finish, and most likely you’ll need to dedicate an entire evening to the experience, since it’s rather difficult to pull yourself away until the credits have rolled.

You are an old mining steambot called Rusty, and you’ve been left at an old mine out in the middle of nowhere by your late uncle. Upon arriving, you discover that the town of Tumbleton, where your mine can be found, is rather empty and desolate. You also discover, however, that your mine contains oodles of wonderful secrets and treasures – and you begin to use these treasures to help Tumbleton grow into a town to be proud of.

When you start out, all you have is a rusty old pickaxe that can barely smash through rock. However, as you dig deep into the randomly-generated underground caverns, you begin to dig up treasures and resources which can be sold in town – the money can then be used to buy upgrades and powers for Rusty, such that you can dig even deeper and find even more exciting bits and bobs.

But it’s not just treasure that you’re digging for. There are special chambers and machines down below that will give Rusty a real boost, and hint at what may well lie even lower beneath the surface. SteamWorld Dig‘s story is told in a very practical manner, with the surroundings that you dig up, and the memories of the robots in Tumbleton, spelling out exactly what happened the year before.

Of course, it’s not that simple. Hidden amongst the treasures are nasty creatures that will do everything in their power to kill you off, and you’ll need to carefully pick and choose your battles. It’s technically possible to make it through SteamWorld Dig while barely crossing paths with any enemies, since you can forge your own path through the soil, and weave around anything that appears to be in your way.

Light is also a massive factor in play. Your lamp will burn down slowly, and once it burns out, you won’t be able to see anything anymore. You can take more lamps with you, and even upgrade your lamp to hold more oil, but believe me – you don’t want to get trapped beneath the surface with no light to guide your way, as it gets rather hairy down there, especially as the monsters get tougher.

All of this comes together to create the most wonderful, spellbinding video game experience, the likes of which you’ll want to hold in your memory for months to come. There are so many little intricacies that make it so special – take the water, for example. Rusty is steam-powered, and as such, you’ll need to collect water from caverns every now and again to power your move set. 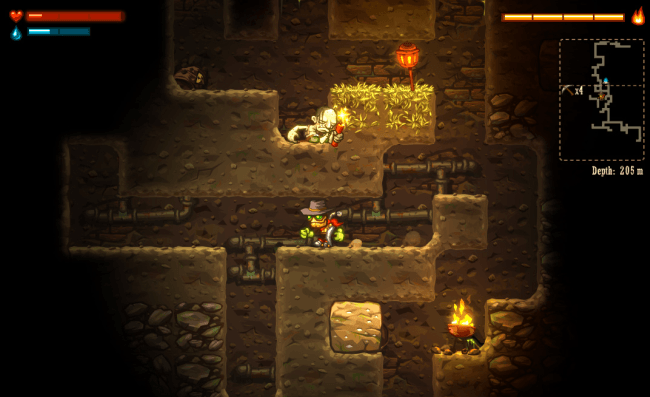 Another example: Everything you do and dig is remembered, from the stuff you leave lying around, to the enemies you trap, to the paths you clear out. This means that backtracking is actually wonderful fun, as you get to see the avenues you created to get to where you are now, and even collect things you missed along the way.

The controls, too, are just so spot-on it hurts. Everything from the way Rusty bounds up walls, to the various rushes and jumps and smashes and springs he produces, all work incredibly well and make you really feel like you’re in full control of the old steambot. And once you’ve played through the game once, it’s fantastic to go back again through a new randomly generated world, and try out lots of different ways to make sure of Rusty’s abilities.

The transition from Nintendo 3DS to PC could have been dangerous – fitting everything from two screens onto one (and dropping the touchscreen functionality too) sounds risky. And yet would you believe it, the PC version may actually be better than the original, thanks to the incredibly crisp, glorious HD visuals that the 3DS simply couldn’t afford the previous version.

The interface is simple to read and everything is snugly fit into place, such that you can get on with the digging, rather than worrying about what’s going on around the edges. Plus, the PC version has a couple of subtle additions of its own which are lovely to discover. 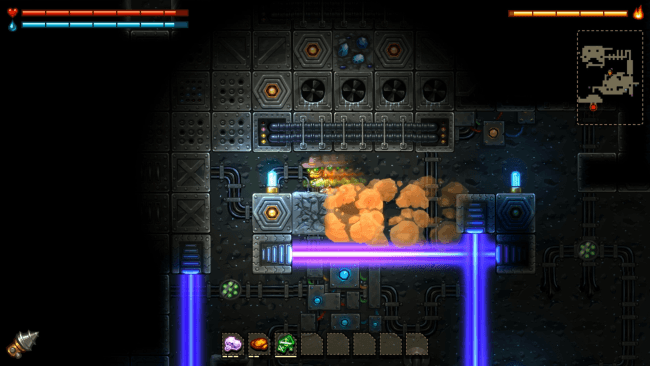 You could argue that SteamWorld Dig’s rather slow start is a hindrance, but really it’s only on additional playthroughs that it comes close to being even a hint of a niggle. The way the game teaches you to play, and gives you enough breathing room such that you can learn great ways to use each jump and maneuver, means that when the times comes for the action to ramp up a notch, you’re well and truly ready for battle.

There are so many games out around Christmas that it can be difficult to choose which ones to bother which, and which to leave until the New Year. My advice would be to drop everything else, and get SteamWorld Dig played. It’s one of the best experiences you’ll have this year, let alone this holiday.