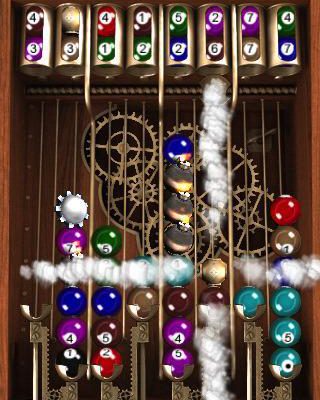 If you’re a developer of a Match-3 game, it must truly be a challenge to stand out from the herd in a meaningful way. They’ve become pretty ubiquitous at this point, and it takes a game pretty unique to set itself apart. That’s where Steamballs steps in. It combines a veritable ton of style and introduces the idea of weight and scales, giving us a whole new way to line up three of the same object.

I really can’t say enough good things about the look and feel of the game, which is presented in the steampunk style. Everything is made of copper pipe, gears and beautiful wood. Steam power seems to run through everything, even the buttons in the menu are glass tubes that fill with steam when selected. There’s a wonderful Victorian mechanical feel to it that’s really unique and fills every corner of the game. Heck, even the Openfeint logo got the steampunk treatment. 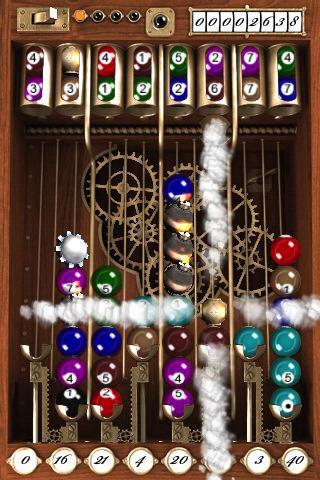 The style fits the game well, with its reliance on scales to move the pieces around. Balls fall, gears spin, and old-school scales move correspondingly. It all has a very heavy weight to it. I imagine if this system existed for real it would be quite ornate. That’s the wonderful thing about steampunk, it’s both fantastical and real at the same time.

The playfield is separated into 4 sections, each with a 2 sided scale. This gives you 8 total chutes to drop your balls into. Each ball has a number on it that reflects its weight, and there’s a readout on the bottom of each chute telling you the total weight of all the balls on the scale. If the two numbers on the scale match then the scale is balanced. If the number is higher on the left or right, then the scale tilts accordingly. You need to use this aspect of the game in order to help yourself line up at least 3 horizontal pieces to clear.

You can also build pieces vertically, but you need to get 5 together, and when you do you won’t get points for them. Instead they’ll collapse into a single ball with the weight of the stack, which takes up less room and will score for extra when cleared by matching 3 or more horizontal pieces. It’s a great way to boost score and manage the height of the stacks, since filling up a single chute to the top ends the game. 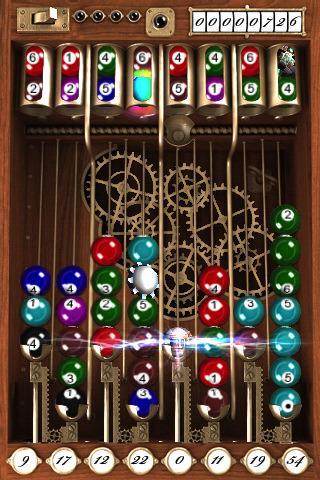 In an effort to shake things up and help you out, you’ll also have 12 “special” balls at your disposal they will do various things like destroy all like colored balls, or remove all of them on one horizontal plane Properly employed they will get you out of many jams. There’s also no timer forcing you to work quickly, so you can take as long as you want to drop each ball. This is almost necessary since you’ll want to calculate weight and which scales are going to move on you.

There are only really two small complaints about the game. First, the music. It’s nice at first, and really fits the style, but it’s a short loop and you’ll get sick of it very quickly. The other is the lack of extra game modes. The game isn’t worse off for not having any, but it certainly would’ve made a good thing even better.

The addition of weight and having to use the scales intelligently really puts this Match-3 game into a category all its own. It’s a game for thinkers, since nothing really happens by chance all that often. Smart use of the tools provided was really the only way to win. Just when we thought nothing new could come to this supposedly tired genre, Steamballs comes along and proves us wrong.