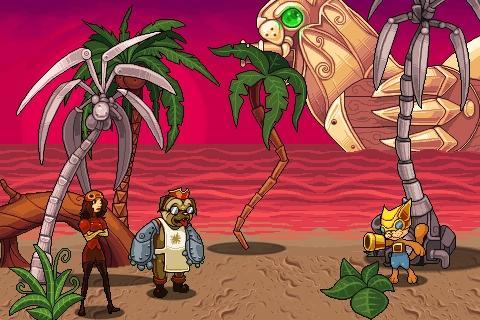 Alright boys and girls, school is in session. Today’s lesson: “What is cool?” Pirates. Pirates are definitely cool. So are side-scrolling adventure games with crazy artwork. And it should be noted that giving anything a steampunk setting automatically makes it cool, too. Someone apparently had the bright idea to mix all three of these things together; the result is Steam Pirates, an iPhone RPG that is not only completely different from anything else on the system, but way cooler than most games in the App Store, too.

Steam Pirates’ story is a riot. It tells the tale of how a human baby girl is adopted by a barren anthropomorphic cat couple. She is named Kat, and her childhood is summed up via a hysterical sketch-filled cut scene. At the start of the game Kat is a successful mercenary who sets out to rescue a rock band that’s gone missing. Unfortunately she finds that only the narcissistic lead singer has survived his band’s encounter with man-eating mermaids and ends up dragging the egotistical schmuck along with her on her further adventures.

The idea is pretty common in the fantasy RPG genre, but it’s elevated beyond the ordinary thanks to the snarky dialogue, solid writing, and the game’s steampunk setting. The mold is never exactly broken, but it is good enough to stand out.

As opposed to many other RPGs on the iPhone, this is a two-dimensional (read: side-scrolling) game that almost feels like a platformer or a brawler based on the way that characters move. There’s no joystick or attack buttons, instead you tap the area of the screen where you want Kat to move.

Combat occurs when an enemy identifies you and rushes over to your character, causing you to enter a battle scene between your party and your opponents. The combat is turn-based, and when a player-controlled character’s turn comes up, a pop up menu and targeting system is provided for you to choose actions from.

There are two minor problems with the game, and they both occur when you are doing dungeon exploration: levels are broken up into smaller rooms/screens that you will have to move between, presumably to save on memory and processing power. The problem is that enemies instantly respawn every time a room loads, which is more than a little frustrating when you have just battled your way to a dead end. The other problem is that some maps are so large and confusingly-laid out that it’s easy to become lost. If the game gets patched, it might be helpful to give players a level map to help them keep track of their location. 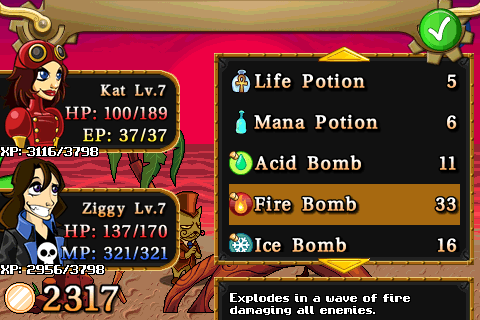 Steam Pirates was made by Luc Bernard, whose other work on video games includes Eternity’s Child for the Wii, Mecho Wars, Mecho Tales, and the controversial Imagination is the Only Escape (an upcoming title for Nintendo platforms that will educate players about the Holocaust). Bernard is a gifted visual artist, and any game he’s involved with benefits greatly from his talent. Unsurprisingly, Steam Pirates is lovely. Bright colors, inventive character/environment design, and generally brilliant creativity can be found everywhere in this game.

The sound works, too, but it doesn’t stand out as much as the visuals do. It gets the job done, suits the mood, and generally stays in the background, like any good soundtrack should. There isn’t any voice acting here, but dialogue is accomplished via text with accents created via phonetic spellings.

Steam Pirates is a very strange game. But it’s also fun. And funny. And absolutely beautiful. It’s unlike anything else you’re likely to encounter on the iPhone, but it’s familiar enough for RPG fans to dive right into and get the hang of. It’s refreshing to see something this good from an independent developer, and hopefully this is just the start of quality iPhone titles from Bernard.