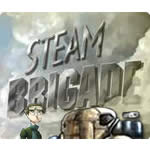 Two of my favorite diversions as a kid were playing with army men and watching TV. Combining the two in mind, I would play out the storyline of favorite shows with my small soldiers – a great way to spend Saturday afternoons.

Nowadays, I still find the need to indulge my creativity, but it’s often a necessity to let off steam. That’s probably why the concept behind Steam Brigade is so intriguing.

Knit together by an alluring storyline, this side-scrolling, real-time strategy game with a cartoon-style, steampunk theme transports you back to an alternate history where airships rule the skies and steam-powered tanks roll across the landscape. Waging war against your adversary, you assemble an army, overpower and seize enemy emplacements, and subdue the threat.

A truly fresh and innovative game, Steam Brigade is not your typical fare. Owing much of its design to the “ancient” Rescue Raiders, a run and gun approach simply won’t work. It takes a calculated strategy to complete each of the game’s 12 missions. A brief tutorial helps, as do the built-in hints, but trial and error is going to be your best companion in learning to quash your foes.

You start with two resources: a factory and an airship. The goal? Destroy your opponent’s industrial works before he obliterates yours. To accomplish this, you issue orders for your factory to turn out military units (cash flow determines how quickly they’re spit out). What’s at your disposal? Men and machines of war include infantry, engineers, tanks, flack trucks, helicopters and more. Obstacles consist of enemy units, as well as bunkers, gun turrets and other stationary posts you’ll need to control. A stick-figure “radar screen” appraises you of units on the field and control of key structures.

Adding interest and an extra element of strategy to the mix, your zeppelin-like airship loses steam during battle, requiring periodic returns to your factory to replenish its water supply (needed to produce steam). Wait too long and your ship explodes, a problem as they’re quite costly to build.

Out of the ordinary for a game in this genre, your Airship is unarmed. That’s right, no guns. Instead, it has a magnet you use to pick things up. With it, you manipulate your forces, as well as the enemy’s. You can still shoot if you want, but you’ll need to grab a vehicle with your magnet to do so. Mostly, you’ll use it to transport men or vehicles where needed, or to drop bombs.

Steam Brigade is not a quick-play distraction. Most of its missions tend to be on the long side. Game AI (Artificial Intelligence) is quite capable, even on the easiest setting. As a result, battles often become a matter of attrition. Though it takes a while, the adversary can usually be worn down by sheer numbers – as long as you’re advancing with the correct units.

Two modes of play power the excitement: Campaign, the main story-based mode, and Skirmish, which lets you tackle individual missions (two stand-alones and those you’ve already played from within the Campaign). Other than that, the only real difference is that Campaign Mode allows you to select one of three difficulty levels while Skirmish Mode allows you to adjust play factors like cash flow and available units for you and your AI opponent.

On a high note, Steam Brigade is a stand out game, unique in today’s market. Its visual steampunk style (the artist is a huge fan of Iron Giant), graphics and music are professionally rendered. And, for a change of pace, its story is told via a blend of prose and poetry. In all, there’s a lot to like about this retro 2D title.

A few factors, however, tend to deflate its balloon. While play will fascinate many, the real-time strategy elements will not appeal to everyone. Battle can become frantic at times, maneuvering your airship and managing units. Intensity increases at the two-thirds to three-quarter mark, too, making the final stage of some levels tedious. It’s not your typical casual game in subject matter, either. Though presented in a cartoonish style sans blood and guts, it’s still a game about war. So, it may not be a good choice for your kids.

Moreover, play ends all too soon. With just 12 Campaign levels and two Skirmish levels, you can easily finish the game in a day. Multiplayer support is currently limited to computer AI alone. Though plans are in place to offer more levels and release a level editor to the public, as well as offer true multiplayer support, they’re currently a vapor.

In the end, when the dust settles and smoke clears, Steam Brigade’s a winner. It’s a memorable ride in an industry inundated by excess “me too-ism” from folks you can tell love video games. Crank up the boilers, boy! It’s time to get steamed!!