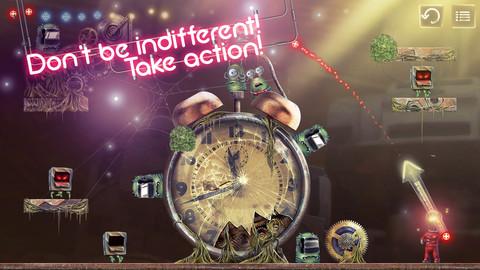 Leave the light on.

On paper, a lead character named Mr. Bulb and gameplay that isn’t far removed from Angry Birds doesn’t scream automatic purchase, but underneath familiar objectives is a challenging and aesthetically arresting game. Despite its miniaturized world, Stay Alight! stands tall among the best iPhone titles, refusing to skimp on polish, creativity, or style. The trickiest bank shots may give many a player pause, but few games demand continued dedication just to see their next stage.

Typically I lament that a mobile game’s requisite swipe at a story ends up worse than no exposition at all. Stay Alight! doesn’t do much talking, but by taking the indie route of showing instead of telling, the world’s details are allowed to seep out organically. The lilliputian wasteland you’ll explore is littered with the ghostly artifacts of happier times. Worn out cassette tapes, used toothpaste tubes, and the faded, broken faces of dolls immerse you even as they take you aback. The textures may remind you of LittleBigPlanet, and the scope is usually reserved for much lighter faire, but the impaled, lynched, or shattered corpses of your fluorescent comrades speaks to more serious matters. The muted violence is reminiscent of Limbo, and the fact that the fallen aren’t immediately noticed only adds to their visual impact.

If the art is adult LittleBigPlanet, then the gameplay is adult Angry Birds. Yes, you’re still hurling bouncing objects at green enemies, but happy accidents are few and far between, and the balls of light you launch quickly fade away. At first blush you may be reminded of Peggle, but that notion will quickly pass as you realize you’re going to have to plan not only your initial throw but the subsequent bounces as well. Nuances like explosive versions of your balls of light, enemies that temporarily take cover, and other bulb people to relay your orbs to trickle out new intrigue and stave off repetition. In spite of being generous with the number of light spheres it gives you, Stay Alight! is no slouch. Most levels will require several tries, too many for some players, and the focus required isn’t in line with the rapid fire pats on the back we usually expect from mobile gaming. 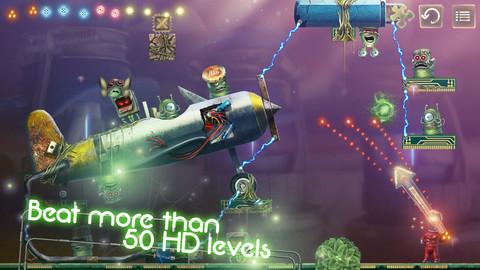 Stay Alight! takes place across three worlds of twenty levels each, with a placeholder for promised future content. It’s good to see that the developer intends to support the title, but there are already many more levels here than most people will see. Players can earn a maximum of three stars on each stage, which are cumulatively used to unlock later worlds. There are also hidden puzzle pieces to be found, but like most collectibles in gaming, these will be ignored by all but the most obsessive of completionists. Intelligently and mercifully, if you grab a puzzle piece and then fail, you still keep the piece.

Anything can be nitpicked, but Stay Alight! is an easy recommendation for any mobile gamer, especially for $1. The gameplay is solid, at times devious, and generally rewarding, and the style and graphics on display are on par with anything on portable touchscreens, especially in artistic terms. Open up the App Store and head toward the light.