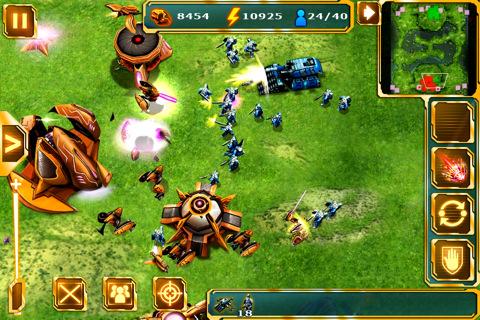 Starfront: Collision is all the proof we need that real time strategy games can work on the iPhone

Welcome to Sinistral, the galaxy’s hottest new vacation hot spot! During your stay, please feel free to hike through our planet’s jungle fields, ski across our snow-filled landscapes, or check out the mysterious alien ruins that were recently uncovered. That said, you might want to keep your eyes and ears open so you can avoid the occasional, tiny little battle between the Consortium, Wardens, and Myriad species. Tourists don’t enjoy the same protection that medics and diplomats do (also, the Myriad think they make for tasty snacks). Thanks for your understanding during this (ahem) challenging time; your patience is appreciated.

So let’s address the elephant in the room: Starfront: Collision is (literally) a StarCraft clone on the iPhone, though that is by no means a bad thing. There are three different playable races (eerily similar to the Terrans, Zurg, and Protoss), each with their own part to play in the single player campaign. Each character has different strengths, weaknesses, and abilities, but they largely play the same.

The story takes place on Sinistral, a planet where a new mineral called Xenodium has been discovered. Naturally, all three races want the stuff for their own reasons. Instead of playing nicely with each other, each race wants all the Xenodium for itself, which means the different factions are at war with each other. The plot is arguably the weakest part of the game, but it’s by no means bad… it’s just that we’ve all seen this kind of narrative before, and generally know what to expect.

Starfront‘s gameplay is extremely impressive. There are a wide variety of challenges as the game progresses, and the increasing difficulty will force you to adjust your tactics rather often. Certain units are stronger and weaker against other units, too, which means that success on a mission success can often hinge on a keen understanding of what works against what.

When it comes to unit management, the game works pretty well. Buildings have to be based around your main headquarters, and certain constructs are necessary to create new types of soldiers/vehicles. Dragging your fingers away from each other creates a selection that you can use to highlight multiple units at a time. Likewise, issuing commands is insanely easy to do.

RTS games typically feature resource management, but Gameloft has kept it to a minimum this time. There are only two resources to actually gather (electricity and Xenodium), and the gathering is totally automated, so it’s never an irritation that interferes with gameplay. 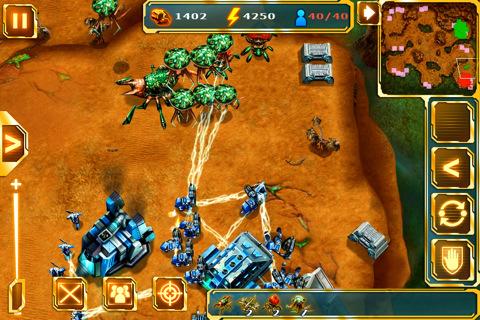 The game also features a robust multiplayer system. Local and online multiplayer are both supported, and there are three different ways to play: one-on-one, two-on-two, and a general free-for-all game type. In order to play online you’ll have to sign up for Gameloft’s free online service. Side note: this was weirdly problematic for me, since I was told my middle name (Vansau) was either a banned or offensive term and wasn’t usable for an online handle.

Visually, Starfront is pretty stunning. The game uses 3D graphics with its massive maps and various units, all of which look amazing. The controls make it easy to zoom, pan, and quick-shift with the camera, too, and framerate slowdown is pretty rare no matter how frantic things get). Gameloft really went for broke when they made this title, and the end result is highly satisfying.

That said, keeping up with the action is more than a little difficult, especially during later levels when there’s a lot of stuff to keep track of. This is due more to the fact that the iPhone’s screen isn’t all that large, and there’s a ton of stuff that will get crammed into that tiny space.

A lot of the issues with Starfront: Collision will probably be resolved when Gameloft is able to bring it to the iPad, mainly because the iPhone’s screen simply isn’t big enough to work well with an RTS title. That said, the game is still a triumph; it’s an amazing, deep strategy title, but it’s accessible enough that casual gamers won’t be turned off by its play mechanics.

If you’re unsure about whether or not you’ll like the game, you’re in luck: Gameloft has released the game for free in the App Store, with the option to buy the full version from within the game.