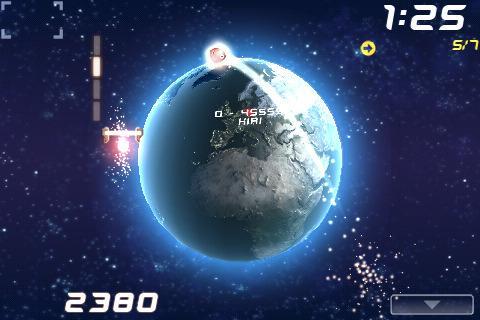 Jordan vs Bird vs Neil Armstrong

Intergalactic basketball is risky business. Don’t believe us? Just ask anyone involved Michael Jordan’s Space Jam. So it’s with a cautious hand that we decided to test our b-ball mettle with Godzilab’s latest iPhone game StarDunk. We quickly realized that our initial reservations were largely unfounded, as StarDunk offers an online free throw competition that’s out of this world.

Like any good pick-up game, the mechanics here are incredibly simple. Players will attempt to sink as many baskets as they can in two minutes, moving their finger on the touch screen to dictate trajectory before releasing the ball. In terms of basic mechanics, StarDunk should take gamers of any skill level only seconds to master.

Little touches will affect the gameplay, keeping you on your toes the entire two minutes of play. Your distance from the net will change with every shot. Activating all four sections of the backboard will give you access to a special bonus, like a larger net or multiple balls. While the gameplay remains identical throughout, there are enough little changes in the course of a game that things never get dull.

Once you feel you’ve mastered the free throw, the real meat and potatoes of StarDunk takes place with the online competition. Flipping a little “online” switch on the menu will allow you to participate in a series of two-minute contests. The gameplay in these is no different than the single-player, but your score here will be compared to a handful of other players who started their game at the same time. Here’s the thing, though – you can’t unlock additional balls unless you take on the online competition.

Balls are unlocked by earning achievements on the Plus+ network, and all of the achievements in StarDunk are derived from participating in the online competition. This stinks for players who’ve made a conscious effort to steer clear of social gaming, but for everyone else earning those extra balls becomes nothing short of a quest. Heavier balls, fasters balls, even balls that can bounce in mid-air – there is a terrific collection of balls to be unlocked that can help players refine their style of play.

Of note due to cuteness is the Moki Ball featuring the character from iBlast Moki, Godzilab’s previous iPhone effort. Also of note, this time due to clear copyright concerns, is the Star Ball. It manages to depict Captain America’s shield in such a way that it’s almost begging for Marvel’s lawyers to come knocking – a surprising choice from such a reputable developer. 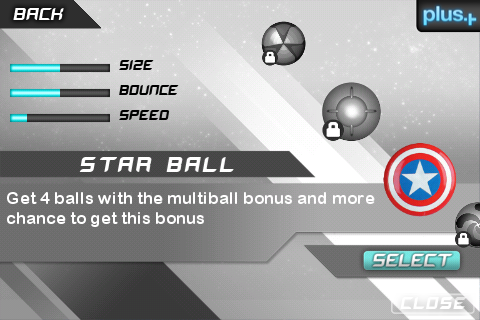 With the space theme and the large globe in the middle of the playing field, we had assumed that the earth’s gravitational pull would play a role in determining the trajectory, adding a deeper level of physics and strategy to the experience. We were a little disappointed that this wasn’t the case. We like how the globe spins and shows the scores of other Plus+ members in competition, but if you were expecting StarDunk to put a literal spin on “Around the World” as we were, you can’t help but feel a little let down with the final product.

While the game may not have lived up to exactly what we had expected from the screens on iTunes, we found StarDunk to be a surprisingly enjoyable outing. It’s a fairly simple game that borders on shallow, but offers enough in the way of unlockables that the game becomes truly difficult to put down. After several hours of outer space free throws, one thing is abundantly clear: Godzilab’s space jam is much better than Michael Jordan’s.