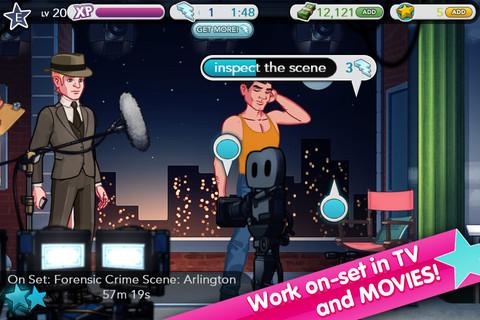 Who knew that being a celebrity could be so dull?

Stardom: The A-List is the latest free-to-play title from developer Glu. The simulation app puts players into the role of an aspiring star or starlet as they attempt to reach their dream of super-stardom in Hollywood. Working their way up from slummy apartments to luxury hotels, the game sounds interesting enough but comes with a central mechanic that is just plain boring.

As the name of the game suggests, the whole goal of Stardom is to become an A-List celebrity. And while that might be impossible for some in reality, Glu makes it all the more reachable. Players start out in a shambling hovel, and after a little coaxing from a friend, land a part time job at the local coffee shop. It is during this whole sequence that the core game play of Stardom is revealed.

The entirety of the app is tapping on things. Yes, that’s it. Tapping. From the apartment to the coffee shop, the play is made crystal: As users enter rooms, there are blue icons that indicate that something in the area can be touched. Using it will consume bits of rechargeable energy and garner experience, coin, and the occasional bit of extra energy. The only time this becomes remotely more exciting is when players work a “job,” but such is little more than tapping under a time limit.

When a job is initiated (e.g. the first job is a shift at the coffee shop), players have a set amount of time to complete it and earn as many “Stars” as possible. These Stars drop when objects are tapped an indicated number of times, and the job completes when five Stars are earned or time expires. Eventually, the jobs begin to change slightly once players start getting some acting breaks.

Once this happens, they’ll receive an agent who will periodically call them with new acting jobs. Upon meeting up, they’ll be given a script from which they will have to memorize a handful of lines and recite them upon meeting with whatever client is looking for an actor (this is done through basic dialogue tree choices). Should users successfully get the role, they’ll begin “shooting” which consists of… more tapping; only now, the time limit for the job is longer.

The only immediate reward that seems to come out of all this is that the coin can be used to buy new clothing for one’s avatar. Also, should a good job be done on set, players will be able to view a newscast that rates their performance and moves them up the global leaderboards. There are achievements as well, but these pretty much just tie into tapping things too.

Eventually players will begin to visit various locals around this virtual Hollywood and meet new people to act as contacts. Sometimes they can be used as supporting roles in gigs that have been landed and other times they’ll act as a means to acquire new ones. There is also the occasional opportunity make choices in dialogue. These choices do appear to affect the game somewhat, but the opportunities to make truly significant ones feel few and far between.

Presentation of the game is equally lax. That said, the game doesn’t look bad, as the art is a good quality. It’s just that nothing happens. Avatars enter a room and stand there while players tap about on various objects. Moreover, backgrounds are pretty much nothing more than static wallpapers. The whole ordeal is boring. 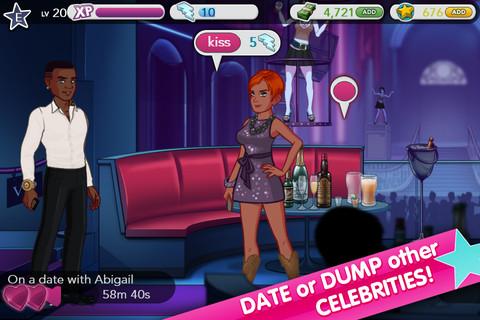 If the drab play were not enough, the game is buggy too. After an initial play session (in which the game worked fine), any attempt to play afterwards resulted in a crash. The only way to fix the problem was to restart the iDevice itself. It’s understandable to have to do so after a big installation, as such is common, but well after it’s been installed? What made matters worse is that it threw its fit in the middle of a timed job.

Perhaps in the right hands, Stardom: The A-List would be enjoyable, but for most of the game, nothing happens. All it really consists of is moving about to different locations and tapping objects the game says players can tap. The only time this remotely changes is with the timed jobs and the occasional opportunity to speak memorized lines or make dialogue choices. Along with crash bugs, this title is not one that’s going to appeal to many. Since it’s free, players are welcome to try themselves, but overall, it’s just not that fun.