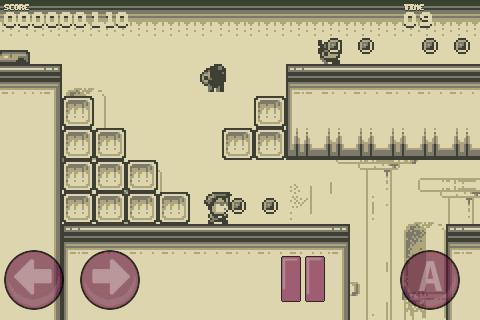 Gaming on the go has been almost completely taken over by today’s smartphones. You can see that in the constantly dropping sales figures for the major game company’s handhelds. That said, we’d be fools to forget about where it all started: Nintendo’s original Game Boy. I remember saving up my allowance and birthday money to buy one the day they came out. That thing went with me everywhere, its monochromatic display becoming permanently implanted into my vision. With Stardash, developer Orangepixel has managed to recreate a lot of what made those games and that system so awesome.

Stardash is simple in concept. It’s a 2D run and jump platformer that requires you to get from one end to the other either as quickly as possible or while collecting all of the coins along the way. The 40 levels spread across four worlds are all meant to be completed in about 20-40 seconds. Each level has two stars up for grabs. If you complete the level before the time runs out you’ll receive one, collect all the coins and you’ll get the other. Of course there are bad guys all over the place and tricky jumps thrown in to make sure it’s not that easy. Luckily the on-screen controls are probably the most responsive, and arguably the best I’ve ever used.

The graphics replicate the look of every original Game Boy game, and the gameplay is that exact form of modern masochistic punishment fun that games like Trials and Super Meat Boy offer. In fact, it’s the Super Meat Boy meets Super Mario Land mixture that makes this game so darned great. It’s difficult in a very fair way; if you die it’s not because the game is getting the best of you, it’s because you messed up. Pixel-perfect precision is required, and luckily Orangepixel has managed to make that possible in a way I’ve never experienced in a mobile game.

If I have any problems with Stardash, it’s in the menu system. OpenFeint support is present, but occasionally made the game force close when mucking around with the leaderboards or achievements. Oddly enough, the whole menu system is where the game seems to be the most unresponsive. It’s a strange, but minor glitch in an otherwise excellent app. 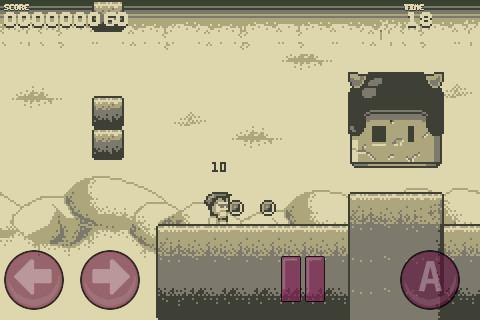 I’d be lying if I said I completed this game. I didn’t even get close. The game is very challenging, and you’ll spend hours working your way through simply completing the levels, let alone earning all the stars available. Unlike most mobile games I review here at Gamezebo, I won’t be deleting this one as soon as I submit this review. No sirree, Stardash will be staying on my phone for a good, long time.