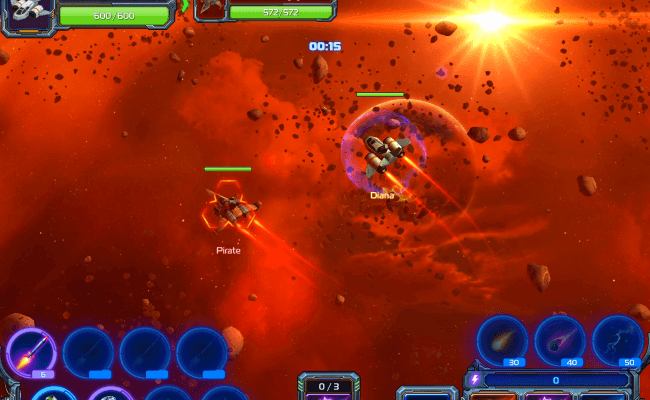 At first glance, it seems as though Starborn Wanderers has a lot going for it. There’s the implication of a large galaxy to explore. Goods can be traded, pirates can be fought, and lots of other space adventure-y stuff can be done. There’s even a magic system of sorts. Trouble is, the glue holding all of these elements together is as uninspired as it is dull.

Centuries from now, humanity has left Earth behind (for reasons that are unclear) and settled on a planet called Terra Nova. Some time after that, a large alien ship called The Ravager blew Terra Nova to bits, while the last few remnants of the human race managed to fight it off using an ancient artifact. Starborn Wanderers takes place close to 200 years later, after humanity has started to adapt to life without a home planet. 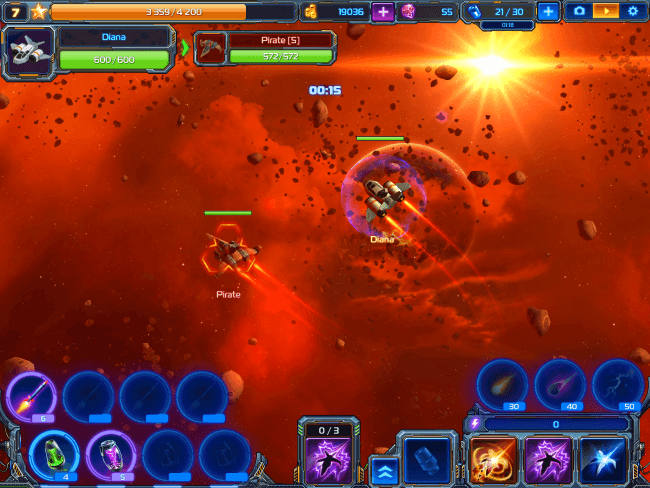 The majority of the species has settled on the mysterious Phoenix Station; relying on the ancient technology, a mystical force known as Alpha Energy, and delicate treaties with other races to keep them safe. Players assume the role of a clueless rookie who (of course) turns out to be the potential savior of the universe. Mush like the mystics referred to as Wanderers, the intrepid hero can tap into Alpha Energy and use it as a weapon.

Starborn Wanderers story is definitely not its strongest point, but it creates a backdrop for lots of interstellar strife. There’s going to be lots of mining, trading and, most importantly, fighting, even before the tutorial is complete.

Starborn Wanderers is a pretty good-looking game. Even though all the backdrops are 2D, they’re nicely detailed and the 3D ships actually blend into them quite well. The illusion of ships docking with a space station or other large dockable venue is also pulled off very nicely. The interface deserves accolades, too. It’s probably one of the easiest to use tap interfaces I’ve ever encountered, with plenty of contextual actions that help to keep the screen from getting too cluttered. And assuming players are interested in exploring, there are also lots of various sectors to scavenge. 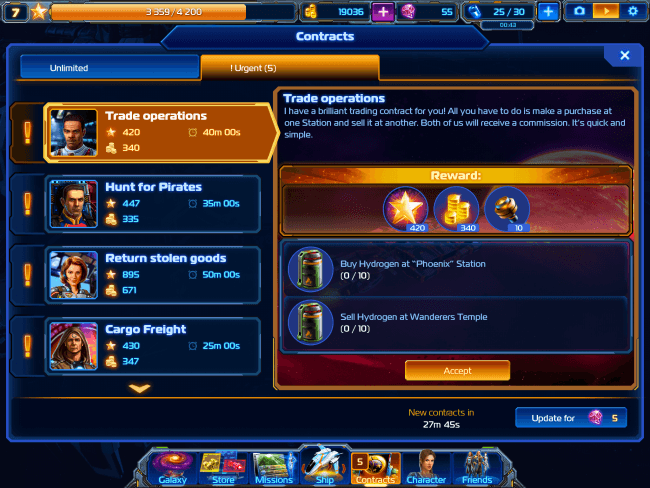 Where Starborn Wanderers starts to fall apart is when it’s actually played. The story is vaguely interesting even though it’s nothing new, but the script is horrible. I mean really, really horrible. The dialogue is awkward, dry, and in many cases repeats itself several times. None of the characters have any personality, and neither does the gameplay.

There’s very little direct player interaction, and what’s there is incredibly dull. The combat is slow and usually devolves into a game of killing time while waiting for the Alpha Energy to charge. Completing contracts is a chore, especially since most of the economic guesswork has been stripped away from trading, and constantly jumping back and forth between sectors will eventually force players to sit and wait while their fuel refills. Exploring the galaxy isn’t even any fun because each sector feels empty despite all the NPCs buzzing around. And thanks to the camera view it’s not even feasible to simply fly around and enjoy the sights.

To call navigation, quest completion, or combat “uninteresting” would be putting it far too lightly. It’s just not fun. Any of it. Every single aspect of each of these elements is dull, repetitive, and uninspired. Even the inclusion of “space magic” (i.e. Alpha Energy) doesn’t help.

Even if there weren’t already a bunch of space adventures/MMOs on iOS that do it better, Starborn Wanderers would still be incredibly disappointing. It looks great and controls great, but it doesn’t seem like that same level of attention was given to the rest of the game. It’s downright painful to try and follow along with the story, and it simply isn’t any fun to play.