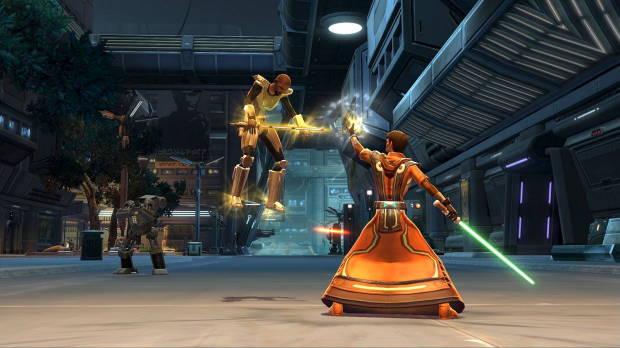 Star Wars: The Old Republic sets a new standard for storytelling in MMO’s

Three months can be a long time in the life of a young MMORPG, possibly long enough to make or break it in today’s market. Star Wars: The Old Republic has made it past the 90-day mark – and sits on the cusp of its first truly significant content update – making it the perfect time to see if the Force truly is with BioWare’s big budget foray into the genre.

Set thousands of years before the Star Wars movies, Star Wars: The Old Republic (we’ll call it SWTOR from here on out) serves as a continuation of the universe BioWare first explored with its Knights of the Old Republic games. Players assume the role of Jedi, Troopers or Smugglers attempting to hold the Galactic Republic together, or fight as Sith, Imperial Agents or Bounty Hunters assisting the Sith Empire on its path of conquest.

On the question of whether the gameplay is simply “WoW with lightsabers,” the answer is… yes, to a point. Certainly, anyone who has spent any time with World of Warcraft, Rift, or any number of popular MMOs will find certain game mechanics immediately recognizable. Things like action bars, party roles, and the way quests are received and turned in are all taken straight from genre predecessors.

Where BioWare chose to push the genre forward (and likely spent most of that rumored $200 million) is in the areas of story and presentation. Every character and quest giver is fully voice acted, and the dialogue wheel from the Mass Effect series is put to good use spicing up interactions with NPCs. Decisions made during conversations also earn characters light side or dark side points, making morality a customizable trait as well.

Companions also help SWTOR stand out from the pack. These NPCs can be sent independently on resource-gathering missions, taking some of the grind out of crafting, and even have their own storylines. But their primary purpose is taking on a complimentary role – for instance, serving as a healer for a character designed to be a tank – to help keep solo characters alive. 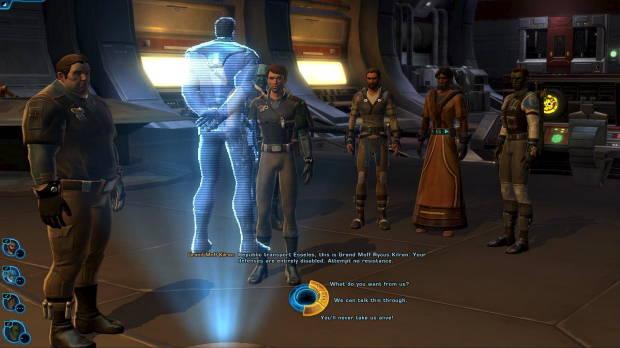 That’s significant, because it’s possible to play all the way to the current level cap of 50 without ever grouping with other humans. Not all the content can be tackled solo, but BioWare wanted leveling to be fun instead of a necessary evil while rushing to the endgame, and for people to be able to go it alone if they desire. Replay value was also a big focus, with each class getting its own distinct story missions. On those three points, the developers definitely succeeded.

They also made familiar locales like Tatooine, Hoth and Coruscant into gorgeous, sprawling worlds. Or at least they have the appearance of vast places to explore, because most quests are easier if one sticks to the paths, and the story generally ushers players from planet to planet in a fairly linear fashion. The sights and (especially) sounds of Star Wars are evident everywhere, but people who want to delve into them sandbox style may find themselves let down.

Other features common to other contemporary MMORPGS are also notable for their absence. Macros, a group-finding tool, and a modifiable UI are all missing from SWTOR – at least for now. Some of those omissions were the results of conscious decisions by the developers, while others were the result of what BioWare later admitted was a rush to meet the game’s December launch. 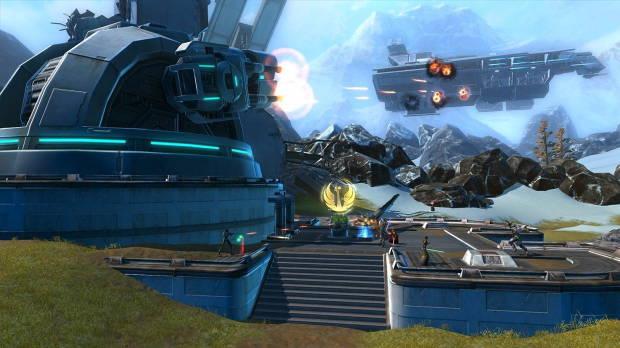 Fortunately help is already on the horizon in the form of Update 1.2, set to hit in early April. This patch promises new group content, a new PvP Warzone that can be played same faction versus same faction (freeing Sith players from endless Huttball) and additional aids for guilds. The most anticipated addition, though, is the true implementation of the Legacy system, a kind of family tree for all of a player’s characters that allows the unlocking of special abilities, emotes and race/class combinations by gaining experience with any of them.

Whether 1.2 and future updates will be enough to satisfy the more vocal parts of the game’s community, which is made up of a mix of longtime MMOers and newcomers drawn in by the Star Wars IP, remains to be seen. Even with Blizzard admitting that the game has been successful enough so far to cut into WOW‘s still enviable subscription base, SWTOR won’t be able to rest on its laurels in the competitive MMORPG space.

Not that most players will even care about the numbers. A few million people have already given the thumbs up to The Old Republic, enjoying BioWare’s new twist on adventuring in a galaxy far, far away – and we’re definitely among them.