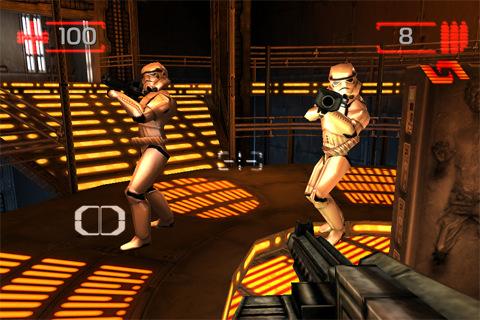 Of all the characters from the Star Wars universe that you could play as in a video game, chances are the lowly Stormtroopers aren’t particularly high on your list. Sure they’re iconic and all, but mostly for being dimwitted blaster fodder. But in Star Wars Academy, a competitive first person shooter from ngmoco, that’s all you get to play as. And while the game features a great RPG-style upgrade system and lots of famous Star Wars locations, it’s also fraught with technical issues and a severe lack of options.

Star Wars Academy is all about four player, competitive shooter action. Each round lasts just a few minutes and the only goal is to rack up as many kills as you can before time runs out. The more kills you get, the more cash and experience you’ll earn at the end of the match. You can play either with strangers in a global match or with friends in a private match, and there’s also an offline mode where you can practice against computer controlled opponents. You don’t earn any experience or cash in this mode, but it’s a good way to get accustomed to game’s controls before heading into battle against real players.

The game uses the familiar virtual twin stick set-up, so you’ll be using your left thumb to move around and your right to aim and fire. Unfortunately, the controls range from sluggish to unresponsive. Sometimes pushing the left stick as far as possible will still result in your character moving at a terribly slow pace, and at others tapping to fire will have no result at all. Worse still, the aiming can be off at times. Even with the reticule located directly on your opponent’s head it may take a couple of shots before the game decides you’re allowed to shoot him.

Star Wars Academy is also very jerky. Watching your opponents run around is very similar to watching the greased up deaf guy from Family Guy flail about. Not only do they just plain look awkward when they run, but they will also magically teleport from one area to the next. The various maps–which take you around iconic locations like Cloud City, Tatooine, and Hoth–are all pretty small, which is a good thing when you only have four players battling it out. It’s rare that you’ll find yourself very far from an opponent. But since the game respawns you in random locations, the small map size also means that you’ll frequently respawn in the middle of a fire fight. There are few things more frustrating than respawning directly into a headshot.

What might keep you playing, though, is the game’s solid RPG style progression. As you play you’ll earn money and experience. The money can be used to purchase new armor and weapons, as well as to upgrade your existing gear. And as is the case with most freemium games there are two different types of currency; one of which you’ll earn very slowly encouraging you to purchase it with real money. Experience, meanwhile, goes towards your rank. As you earn higher ranks, more and more gear will unlock for purchase. You’ll get new trooper outfits, and you can even buy Luke Skywalker or Han Solo’s face…for some reason. 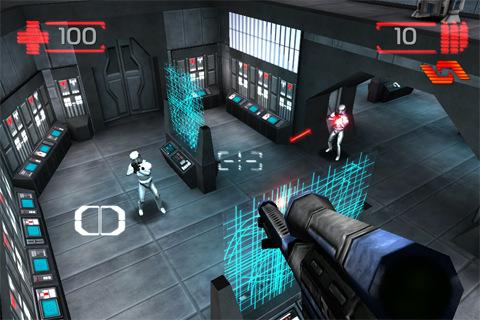 Aside from the general jerkiness of the animation, Star Wars Academy is good looking game. The backgrounds, in particular, look great, especially when you actually get a chance to go outside like in the Tatooine stage. Even at a quick glance it’s pretty easy to tell this is a Star Wars game. Similarly, the blaster fire sound effects will be very familiar to fans of the franchise. Unfortunately, sometimes your gun will decide it doesn’t want to make a noise when it fires, which can be a bit disconcerting. Overall this is a very quiet game, with only the occasional gunfire and awkward sounding grunt to punctuate the silence.

Star Wars Academy is a decent game if all you’re looking for is a few quick rounds of FPS action. Even with its bad controls, the gameplay is passable and the upgrade system is pretty engaging. Plus it’s Star Wars, which is always a good thing. But the lack of any real variety and the frustrating technical issues keep this from being anything more than a light distraction. If you want a deep first person shooter for your phone, this isn’t the game you’re looking for.