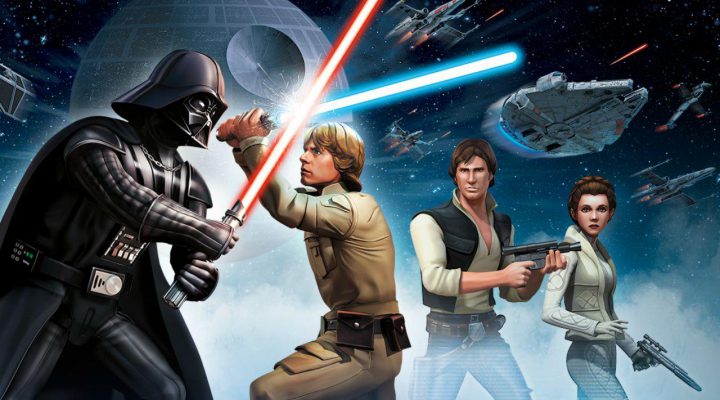 Tried-and-true gameplay that holds up for long-term enjoyment.

Missing some notable characters like Padme, Grievous, and Yoda.

It’s been a great November for Star Wars fans. With The Force Awakens just weeks away, the Star Wars hype hasn’t been at this level in a over decade. The arrival of Star Wars Battlefront has given console and PC gamers something to gnaw on while they await the film’s debut, and now mobile gamers get a great Star Wars game in the form of Star Wars: Galaxy of Heroes.

Molded after many popular turn-based RPGs on mobile devices, Star Wars: Galaxy of Heroes is a familiar environment for mobile gamers to jump into. From the upgrade mechanics to the combat mechanics, the elements of the game felt very familiar to me once I learned the Star Wars-themed lingo for everything (for example, Data Cards are the treasure chests of Galaxy of Heroes).

With that said, Star Wars: Galaxy of Heroes doesn’t try to be too different or unique, which obviously hurts the game’s creativity. But this is largely a case of previous games gradually presenting the players with a more streamlined experience to the point where current games can easily adapt to them. The lack of originality is easily made up for by Galaxy of Heroes’s thematic approach. 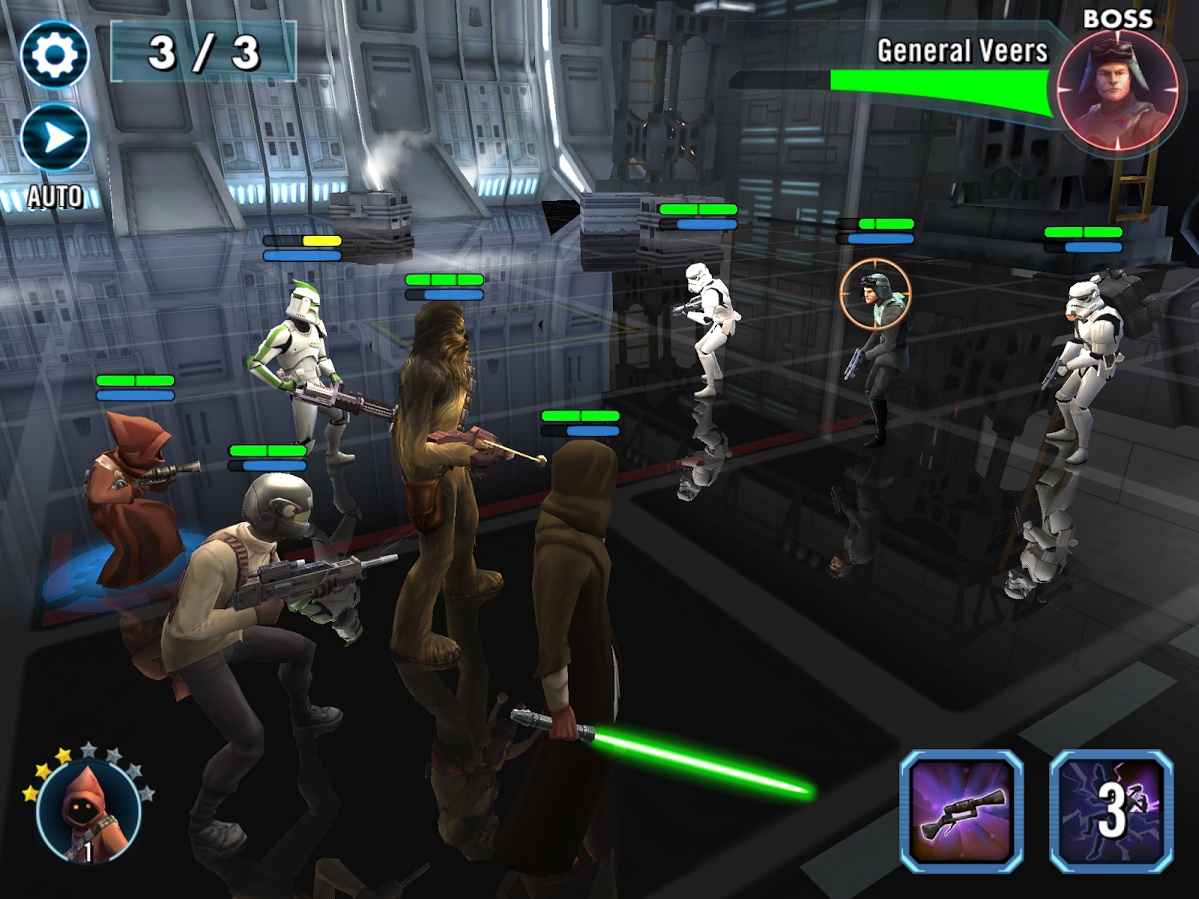 As I mentioned, everything in the game (which can pretty much be found in any other collection-heavy turn-based RPG) was painted over with a Star Wars theme. The whole concept of the game is taken from the franchise’s fictional board game, Sabaak. It’s the chess-like game you saw R2-D2 and Chewbacca playing on the Falcon. Instead of alien monsters, players get to control characters from the Star Wars universe, which is a bit odd when you think about people from the Star Wars universe playing a game about other people in the Star Wars universe …but just roll with it. I suppose it isn’t too different than people playing chess with game pieces carved after historical figures.

Players unlock characters which act like game pieces that each have their own special abilities, and all of which can be upgraded to utilize increased offensive and defensive capabilities. Every character starts with one special ability and a basic attack, and Star Wars: Galaxy of Heroes wisely keeps characters’ special abilities relevant to the character using them. In my experience, players can have Chewbacca roar to taunt enemies to focus fire on him (he’s tanky so it’s okay), a Jawa can deal a little bit of damage to all enemy characters at once with a bonus chance to disable robotic enemies, and Mace Windu can dish out a strong lightsaber attack that can remove buffs from a particular enemy character. 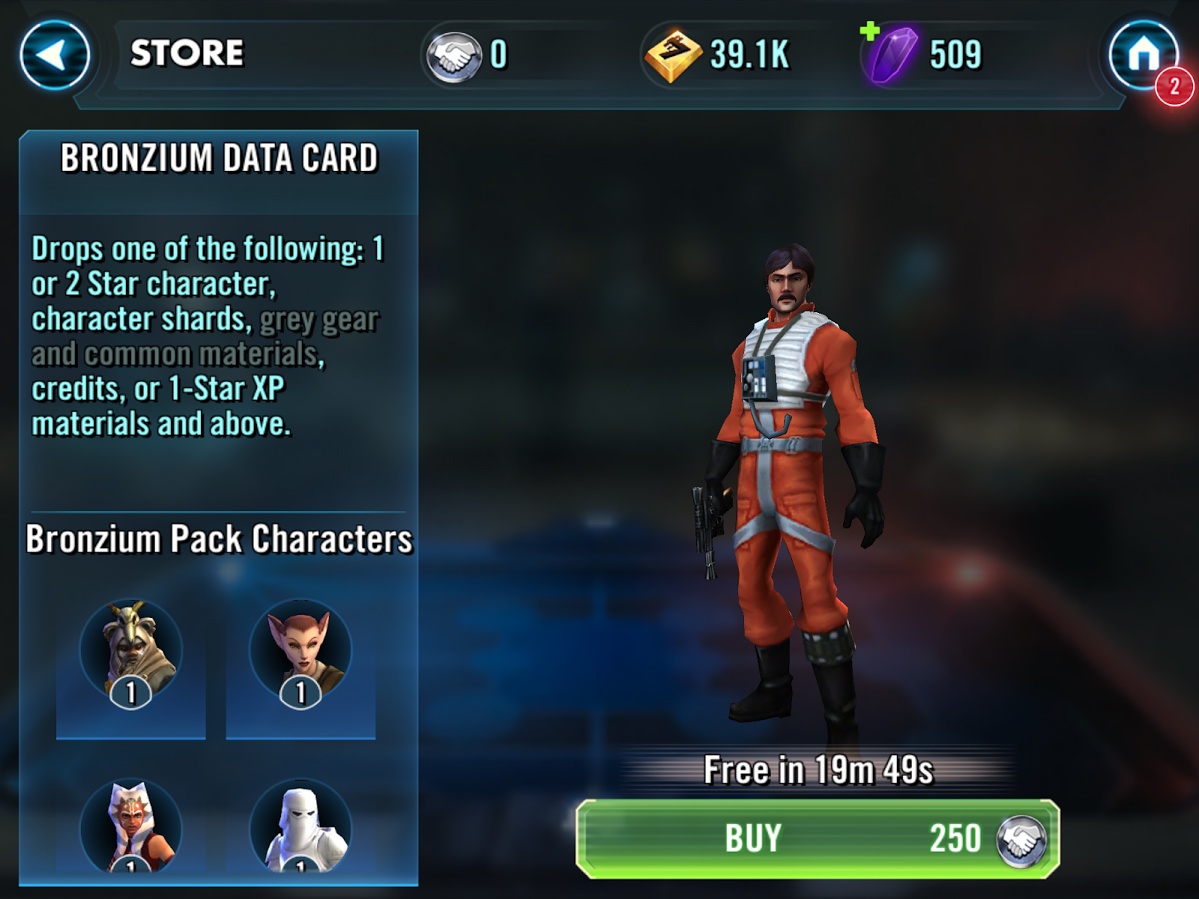 You get all of these characters by collecting data cards which you can purchase with in-game currency, collect for free by simply checking into the game throughout the day, or by using in-app purchases. Each data card contains a randomly generated item, so you might get a playable character in one, shards used towards earning a character in another, or an item to equip a character with. I guess I got pretty lucky because in my second day of playing the game I unlocked Mace Windu, a 4-star character (that my editor has since seen touted as the star of a $40 in-app purchase bundle).

The character selection is pretty impressive, featuring characters from the two trilogies, as well as the Clone Wars television series, characters from the upcoming trilogy, and more. Fan favorites like, Vader, Boba Fett, Chewie, Leia, and Obi-Wan are included, and there are a bunch of lesser-known Star Wars characters I thought it was cool that they included like Old Daka, Savage Opress, Barriss Offee, and Eeth Koth. Oddly missing though are Padme, General Grievous, and Yoda. Yoda is even featured in the logo art (see the trailer below), yet isn’t available in the roster. Still, they’ve included HK-47 from Knights of the Old Republic, which pretty much makes up for any of the roster’s omissions in my opinion.

My only real issue with Star Wars: Galaxy of Heroes is that during combat I often had difficulty switching between targets to attack. The game just struggled to realize I was tapping different characters. This would occur even when there were no active taunts among enemy characters. It certainly isn’t a game-breaking issue, but it was annoying nonetheless.

Star Wars: Galaxy of Heroes is the best Star Wars game to release for mobile devices in recent memory. It’s a great mix of fun franchise and tried-and-true gameplay mechanics. You won’t find anything particularly new in the genre here, but you will find some great turn-based RPG gameplay with some of the galaxy’s best warriors.