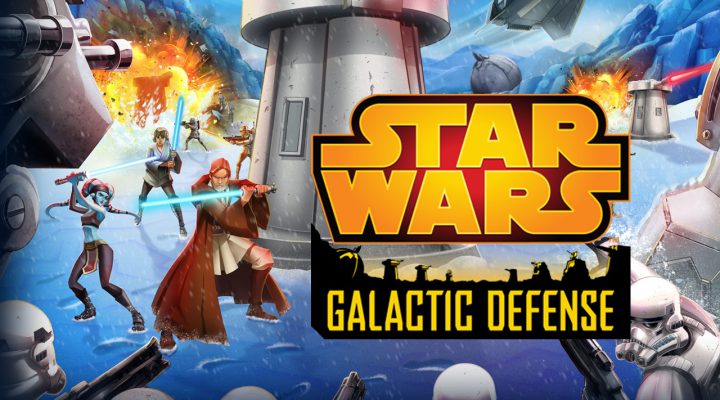 Great use of the Star Wars liscense.

Forced to repeat the same missions repeatedly with little variation.

Disney and Lucasfilm know that Star Wars is one of the most recognized franchises in the world, and they’re not afraid to leverage that fact when going after mobile gaming’s biggest names. In late August we saw the release of Star Wars Commander, Disney Mobile’s take on the mega-hit Clash of Clans. Now, a little over a month later, we are presented with DeNA’s Star Wars Galactic Defense, a tower defense title that is trying to turn Kingdom Rush fans to the dark side.

Or the light side, you’re totally free to choose. 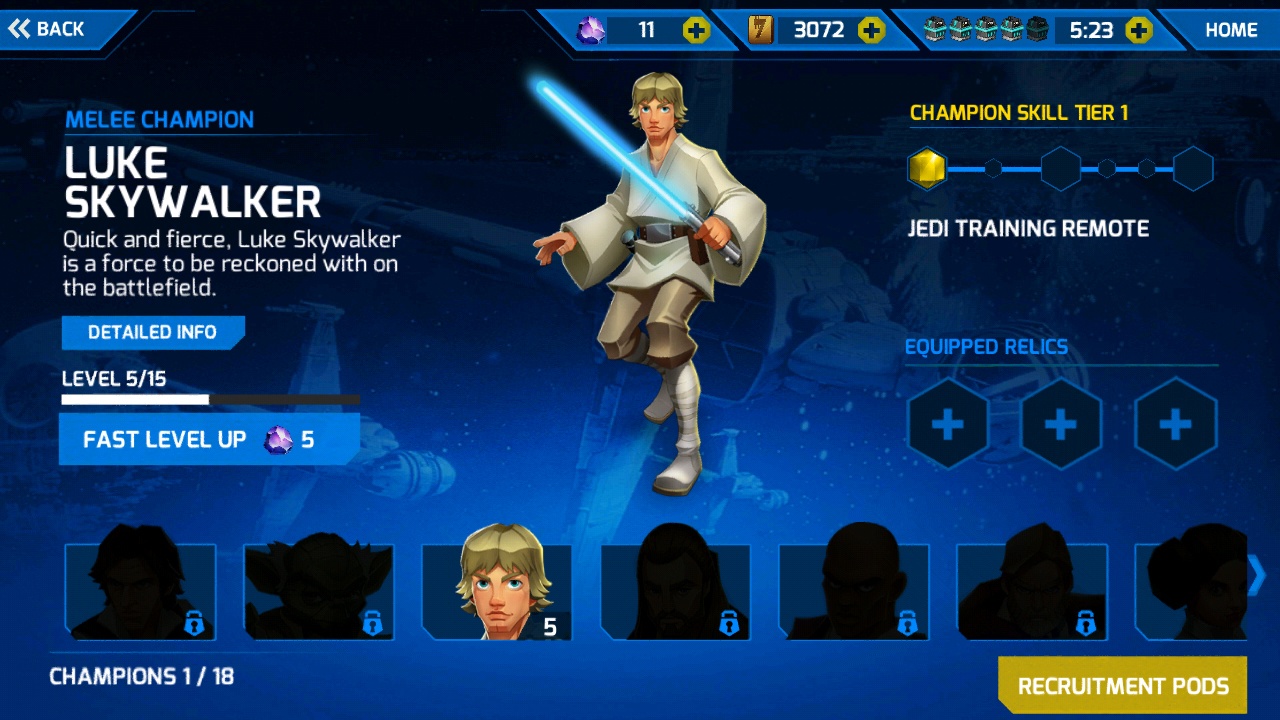 In fact, that’s a good place to start the review: Star Wars Galactic Defense is essentially two games in one. Right from the beginning, players have the option to play as the good guys or the bad guys. The choice is not definitive, and players can switch back and forth between the Light and Dark campaigns as they wish.

The major difference, and what ultimately fueled my decision to play more on the Dark campaign than the Light campaign, is that each side has unique champions that the player controls throughout the levels. These champions are the characters that Star Wars fans will recognize in a heartbeat.

Luke Skywalker, Yoda, Chewbacca, and even Admiral Ackbar are some of the champions players will get to control in the Light campaign. The Dark campaign features villains like Darth Vader, General Grievous, Darth Maul, and my personal favorite, Boba Fett. Each champion has their own unique abilities that the player can utilize to their advantage on the battlefield. 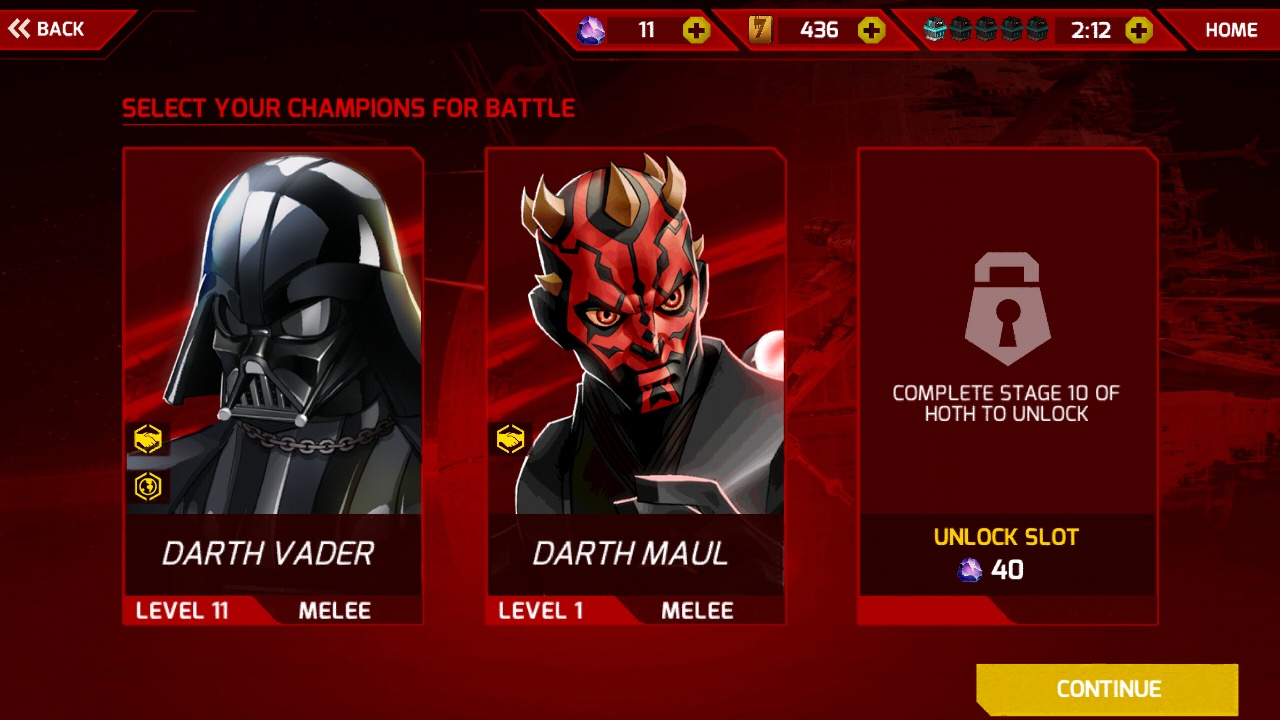 For example, Darth Vader has a brutal lightsaber attack that damages enemies all around him, while Luke Skywalker can summon a droid that attacks nearby enemies while slowing their movement speed. Players can freely move their champions throughout the level as they see fit, and their abilities will automatically recharge after a short duration.

Much like Kingdom Rush, the levels in Galactic Defense require the player to strategically plan out the placement of four different types of defensive towers, which can be upgraded a handful of ways to further facilitate a particular usage. 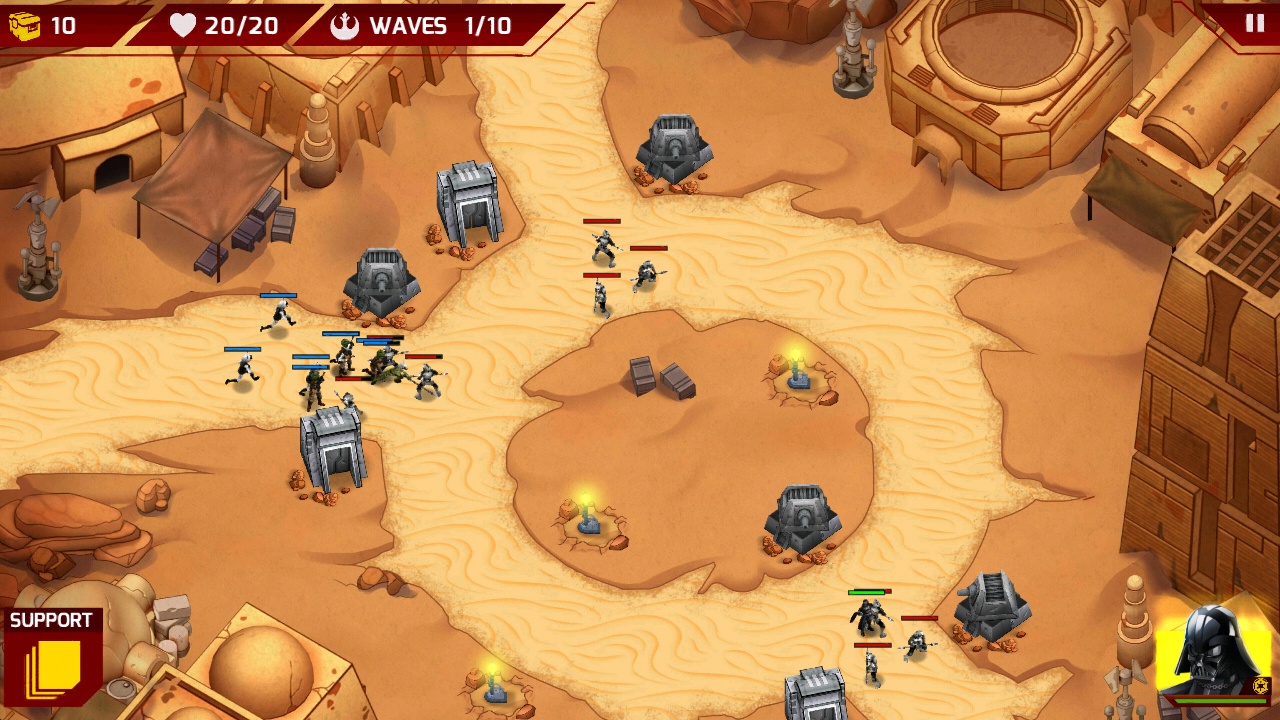 The towers are all straightforward and easy to understand. The blaster tower is the standard, ranged tower; an infantry tower dispenses melee units, an artillery tower will slowly damage units hit by its shells, and the droid tower slows enemies and increases the damage done to them by the other towers.

Players familiar with Kingdom Rush will be able to jump right into the game utilizing many of the same standard tower defense strategies. However, beyond the first level, Galactic Defense gets challenging quickly. 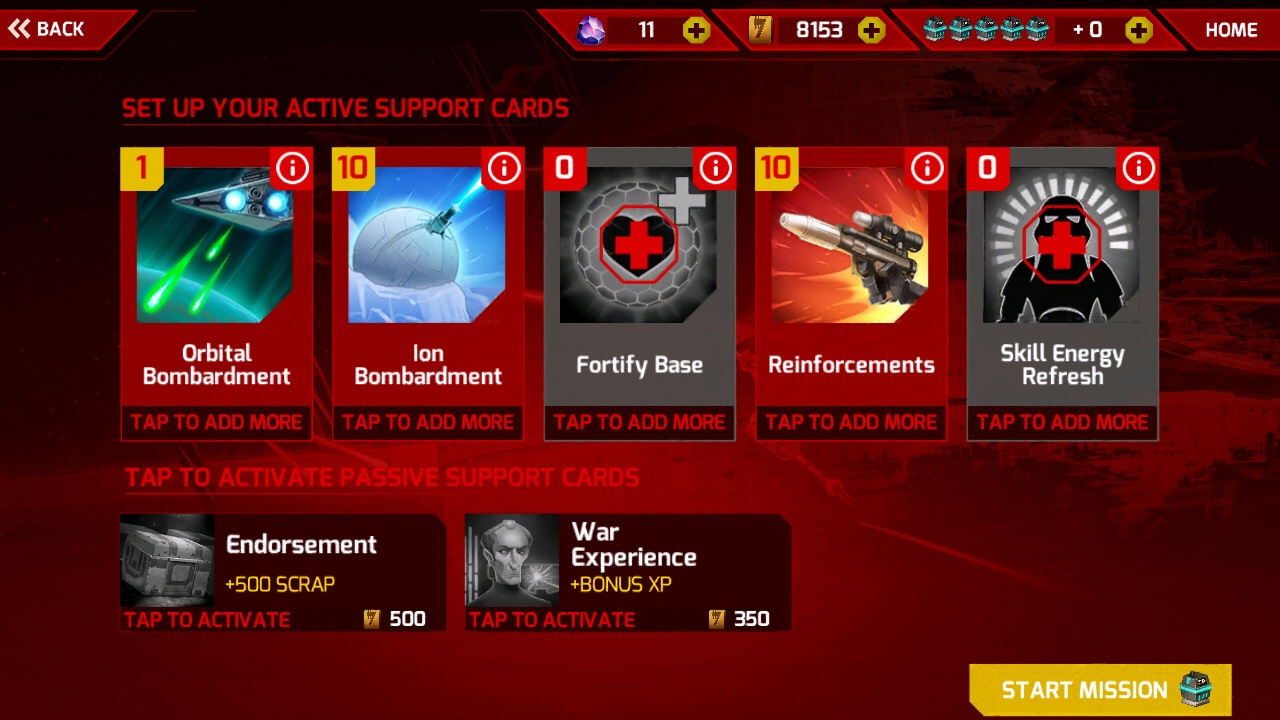 At first, I was frustrated with how difficult Galactic Defense was, figuring that the game was not-so-subtly nudging me towards buying more support cards. But I soon realized I could go back and repeat levels on harder difficulties for increased experience and a chance at a rare relic, which are used to increase the power of the chosen champion.

Currently there are only three planets available in the game: Tatooine, Hoth, and Endor. Three other planets are visible, but locked away behind “coming soon” subheadings. Tatooine is the starting planet, and to unlock Hoth, players need to collect forty-eight stars. Stars are awarded based on performance during a level, and Tatooine has twelve levels. This means players have to go back and replay earlier levels multiple times in order to progress onto the next planet.

This wouldn’t be so bad if the difference in difficulties was more reasonable. I beat the first level on every difficulty level (except extreme, which I’m positive requires end-game champions) and employed the same strategy at each difficulty. There is no fast forward button, so for four rounds in a row I watched the same units run in and die at the same towers in the same positions.

Sure I could change it up, but since Galactic Defense uses an energy system that dictates how often you can play without playing, I wasn’t too keen on experimenting and risking a loss.

Star Wars: Galactic Defense borrows liberally from Kingdom Rush and doesn’t bring anything new to the table, but I’m not one to complain about Star Wars-themed anything, so it works for me. Apart from some technical issues and being forced to replay the same levels multiple times, Star Wars Galactic Defense is a pretty tower defense offering; especially for Star Wars fans.