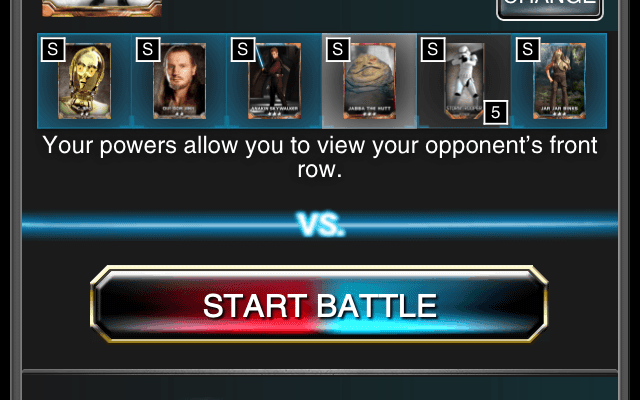 Star Wars Force Collection is yet another addition to the crowded and bafflingly popular collectible card battle game genre that’s entirely unremarkable save for one thing: it serves up a very impressive multimedia overload of all things Star Wars. If you’ve been looking for a CCG that really caters to your jones for a galaxy far, far away, then now, my friend, is the time to jump in.

Star Wars Force Collection promises to let you experience the Force in a whole new way, adventuring through quests, battling rivals in strategic battles, rising through the ranks of the Jedi or the Sith and more, but the truth is that it’s somewhat more mundane than that. While your adventures will take you to a half-dozen Star Wars planets, some famous and others rather less so, questing is simply a matter of tapping on enemy characters as they appear on the screen, dispatching them one at a time until you run out of energy points. Once that’s done, you can either wait for your EP to recharge at a rate of one point per minute, or you can use “crystals” to recharge them – crystals being awarded in small amounts during gameplay and available in more useful quantities in the Star Wars Force Collection shop. 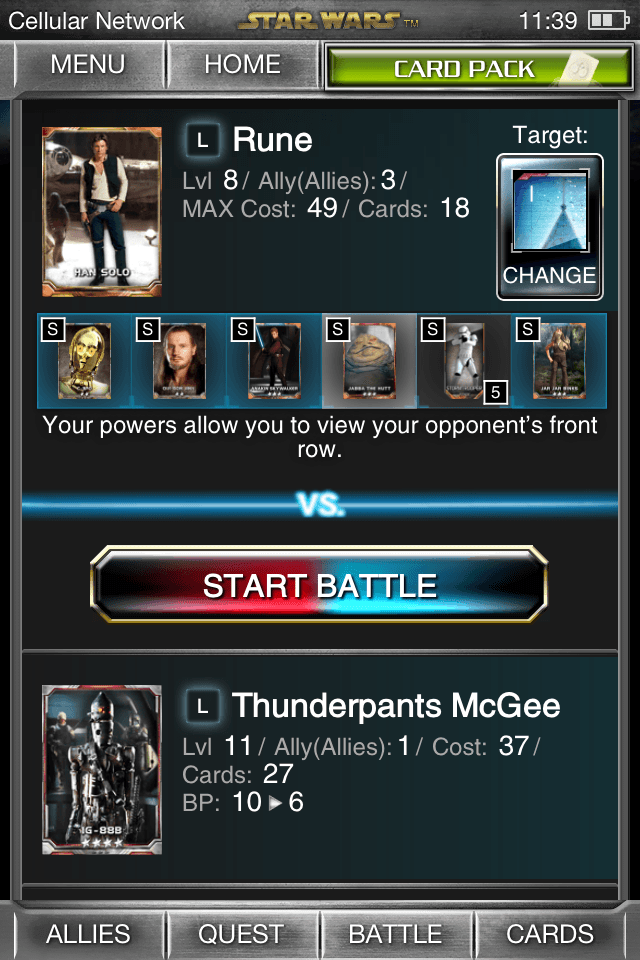 If you don’t want to spend the money, you can pass time waiting for your energy to recharge by battling other players online. There’s a bit more of a strategic element to this portion of the game, as you can array your cards on a grid, which you’ll then set against the similarly-arranged forces of your opponent. Each character has an attack and defense rating and also a range – short, medium or long – that determines their effectiveness in battle. The game claims that strategically laying out your forces is vital to success, and this may be true in very high-level battles against the top ranked players; most people, however, will likely find as I did that the “auto” option does an adequate job of putting it all together.

Cards, the crux of the game, are collected through quests, booster pack purchases and occasional bonuses. There are three different types: Character cards, featuring named characters taken from throughout the Star Wars canon, are the most interesting and serve as the game’s primary attraction; Stack cards are the anonymous cannon-fodder soldiers like Stormtroopers and Ewoks, who can be stacked on a single spot on the battlefield, giving them some semblance of usefulness; and Vehicle cards, which aren’t collected but constructed from blueprints, parts of which are randomly acquired during quests and, more often, taken from other players in PvP combat. Vehicle cards are also unique in that they have limited endurance and disappear from your deck once that value is reduced to zero, forcing you to rebuild them (if you still want them) at a sometimes substantial cost. 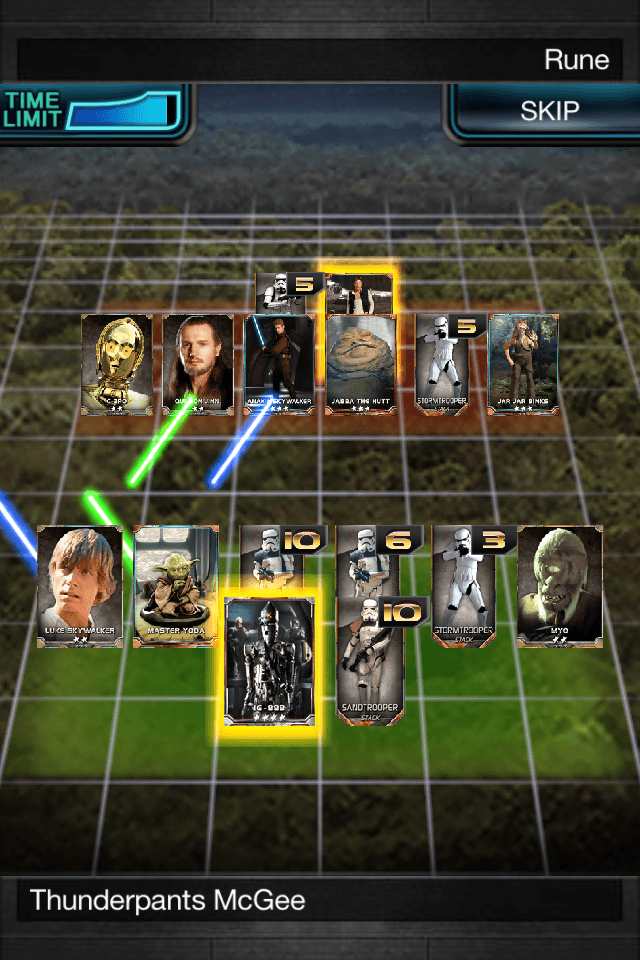 As you might expect from a Star Wars game, Character cards belong to either the Light Side or the Dark Side of the Force, although they can be mixed and matched freely in your arsenal. You, too, will have to pick your side, but it’s not a binary, black-or-white choice. Instead, boss battles allow you to choose to fight a character from the Light Side or the Dark Side, which has an impact upon your “Force value.” And of course, the cards can be “enhanced” by spending credits earned through gameplay (or purchased in the shop) to increase their levels, or “evolved” by combining two identical cards to create a single, more powerful card.

This will all sound more than a little familiar to anyone who’s played any other CCG in the past. Star Wars Force Collection is very conventional in that regard. It keeps you tapping on the screen in pursuit of “cards” that don’t actually exist, and it’s a “game” only in the sense that unwrapping a package of Star Wars cards back in the 70s – actual cards, printed and packed with a dangerously rock-hard piece of what the producers claimed was gum – was itself a game. There’s no actual gameplay, there’s only the rite of following instructions in an endless quest for more, better cards. 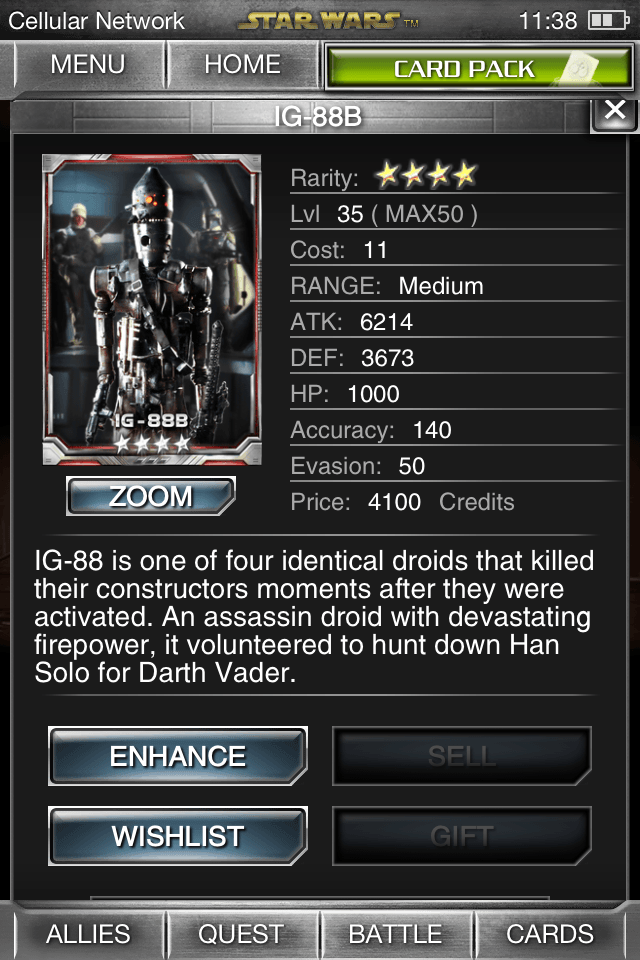 But if that’s your thing, as it seems to be for so many mobile gamers nowadays, Star Wars Force Collection does it right. It’s loaded with bells and whistles, the interface is small but very clean and accessible, and if you do find yourself wanting to know a little more about some aspect of the game, the help function is actually helpful. More importantly, this thing screams Star Wars every time you turn around. The cards feature many iconic stills taken from the movies, and numerous pieces of famous Star Wars music play non-stop in the background. You can turn it off, but why would you? Even button presses are accompanied by famous Star Wars sound effects.

As a collectible card battle game, Star Wars Force Collection brings absolutely nothing of note to the table. It’s a bandwagon-jumper through and through, designed to maximize revenues by maximizing the obsessive urge to tap-tap-tap (and pay-pay-pay) in hopes of a high-end Boba Fett or Darth Maul card. But as an official Star Wars product, it’s very slickly produced and packed with plenty of sights and sounds from one of the most famous sci-fi franchises of all time. It’s not much of a “game” in the strictest sense, but if you’re looking for a way to recapture the glory and frustration of Star Wars card collecting in the digital era, you might just have a good time with it.