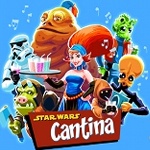 When I was asked to review a new Star Wars iPhone game, I was thrilled. I don’t want to date myself, but I do remember seeing the original Star Wars movie in my youth, and it was an event I’ll never forget. So, when a developer takes on the license of a mega-brand that is loved by generations, the expectations for fun are of galactic proportions. Unfortunately, Star Wars Cantina is like one of those movies where you see all of the best scenes in the trailer. Lured by the preview, you sit through the movie, hoping it will get better if you just stay a little longer. Like those disappointing films, Star Wars Cantina does not live up to its famous name.

The game starts well. I really enjoyed the cartoon art cut scenes that tell the story of how Robb the Besalisk, a down-on-his-luck bartender and owner of a cantina in Mos Entha, enlists the help of his friend, Nia Adea, an adventurer and traveler who “rarely stays on a planet for more than a few days.” You play as Nia, who dons an apron and begins serving up drinks to all of the weird and wonderful characters you would expect in a Star Wars world. The bad guy, a loan shark named Varak’cha (a Devaronian) has given Robb 15 days to pay up or something awful will happen to the cantina. Now, you have your motivation. You’ve got to work fast and efficiently to earn as much money as possible so Robb won’t lose the bar. Sound familiar?

Yes, the set-up is very common in today’s world of casual time management games. Diner Dash, Cake Mania, Ranch Rush, Sally’s Salon, Farm Frenzy, and on and on. There is always something or someone to save from financial disaster. What’s different this time is you’re in a Star Wars world where most creatures are not human. The characters in Star Wars Cantina are drawn very well. You get everything you would expect in a cartoon Star Wars world. So, while Star Wars Cantina starts out with a familiar premise and with terrific artwork, it is when you actually begin playing the game that things start falling apart.

First of all, the set up is awkward. You have incoming customers, the bar (where you retrieve the drinks), and the disposal area all on the first screen (which is laid out in landscape view). Then, you tap at the bottom of the screen, and the next screen is the area where the customers sit at tables. This set up makes a few things awkward. It’s hard to see what customers are asking for until you go to the bottom screen. It’s also hard to tell how many customers are waiting in line until you pop up to the first screen. I kept wanting to see the whole restaurant at once, or at least have the images connect smoothly so I could see a little bit of the previous screen while I was moving to the next screen.

What frustrated me most is I was never sure how to work the controls. I tapped to answer the request of the customer. I tapped to pick up the drinks from the bar. But sometimes it took two taps to accomplish what I wanted to do. Sometimes the bar tender (who is Robb) would only take my order on one of the drinks and I’d have to come back to get the others. One tap, two taps, and sometimes many taps would be necessary before I could get the action I wanted to occur. Needless to say, even though I am experienced at these games, I failed the first level several times. That is poor game design in my opinion. I got through the tutorial just fine, so I knew how to play the game, that wasn’t the issue. I don’t know if the developers tested their game, and I’m not really sure who they were aiming for when they designed the first level to be so difficult to pass.

I am a big believer in ramping up difficulty in a game gradually over time. I know it can be challenging to do, from a developer’s point of view. But as a player, I want to feel good about my successes right away. I want to feel like I am mastering the game, over time. If I fail too often, it’s just not fun. And that’s the bottom line for me. If you want me to plunk down my hard-earned cash for a game that costs $4.99 in the App Store, you’ve got to do better than Star Wars Cantina. While I love Star Wars, and I do love the artwork in this game, I would recommend you pass. You’ll have more fun watching one of the old movies.