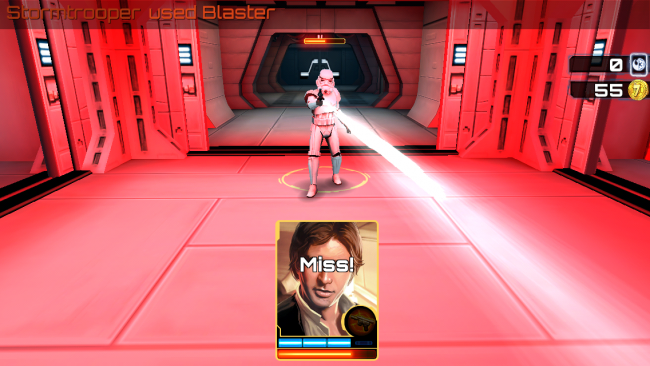 I imagine a fair number of people were of the “oh great, another Star Wars card game” opinion when Star Wars: Assault Team was announced, and I can’t say I blame them. But while it does make use of a few unfortunate monetization techniques, it’s actually not a bad time. In fact, it’s kind of clever.

As with most Star Wars games these days, Assault Team just can’t seem to avoid using notable characters from the movies. On the one hand, as a fan of the franchise, I think it’s about time to start exploring the expanded universe a bit more (or even create new characters entirely). But on the other, I can see why LucasArts would want to stick with the names most of the general public will be familiar with.

It all starts with Han Solo finding himself trapped on a Star Destroyer and fighting his way to freedom. As he blasts through teams of Storm Troopers during the tutorial missions, he’ll start to round up a decent team of fellow prisoners – as well as reunite with Chewbacca of course – and then it’s on to the game proper.

You’ll be dividing your time in Assault Team between combat and team management. Combat is entirely turn-based and always progresses from left to right. Just tap on an enemy to attack them, or tap on your hero’s card in order to activate their special ability – assuming they have one and it’s fully charged.

Combat is a bit predictable, but this will give you the chance to plan out your moves in advance and, hopefully, take a few enemies out before they even get the chance to attack. Managing your team is also fairly straightforward. You’ll earn Training and Promotion Items as you play, either through regular or special missions, and use them to level-up and “evolve” your heroes – for a variable fee, of course. Certain Training Items will give characters with a matching affinity (Survival, Mechanical, etc) bonus experience, though, so matching like with like will optimize your spending. Similarly, certain characters will require certain Promotion Items in order to progress to the next rank (i.e. evolve). 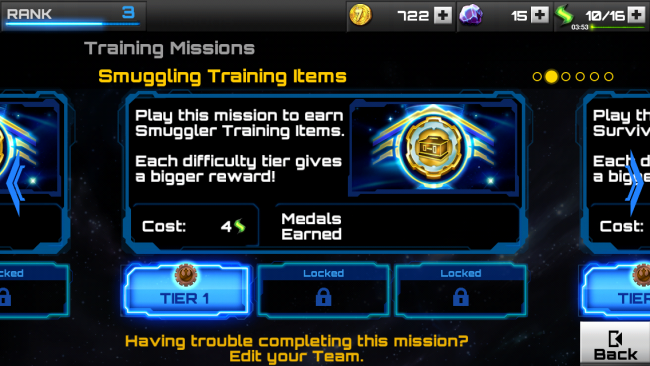 While the turn-based combat is rather simple, I’ve found it to be quite refreshing for a card game. Not only does it make the action far more interactive, it’s also more interesting to look at as enemies are depicted as 3D models rather than digital sheets of cardboard. They react to getting hit, they’ll tumble to the ground when defeated, and so on. It definitely beats watching two character portraits bumping into each other on autopilot. It also helps that what little dialog there is isn’t as painfully awkward as what I’ve seen in other Star Wars-themed card games. I’m looking at you, Force Collection.

I was also impressed with how Assault Team caters to the player’s need to grind. Grinding is still necessary, which is kind of a shame, but it’s handled quite well here. Regular missions will earn you Credits, items, and so on, but there are also Special Missions available that will earn very specific rewards. Need to level-up your medic? Just play a few special missions for the appropriate Training Items (Smuggler or Survival in this case). The same applies to Promotion Items. Heck, there’s even a set of special missions specifically designed to let you wrack-up Credits. 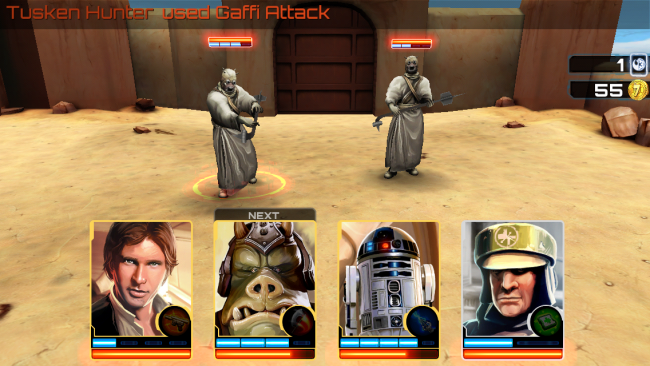 Still, it’s unfortunate that Assault Team uses one of my least favorite monetization techniques. I’m talking about holding the loot you’ve earned on a mission hostage (forcing you to use premium currency to continue or forfeit your earnings) if your team falls. I absolutely hate that model and want it to die in a fire. That said, it’s not exceedingly bad here. So long as you regularly Train and Promote your team members, you should be able to push your way along. And missions are short enough that it’s not really a huge loss to simply start over or come back later. Still, it’s a pretty underhanded tactic.

I also ran into trouble at first when trying to figure out the whole Training and Promotion thing. The tutorial explains Training to a point, but it really sort of glosses over Promotion, which resulted in having to figure it out by feel. It’s not super-complicated or anything, but a little more explanation would go a long way toward keeping players from needlessly selling or misusing certain items.

Star Wars: Assault Team is a pretty neat little digital card game that’s only slightly impacted by some inherent clunkiness and monetization techniques. Overall it’s actually quite entertaining and deserves credit for trying something that we haven’t already seen dozens of times before. Plus it’s Star Wars, of course.