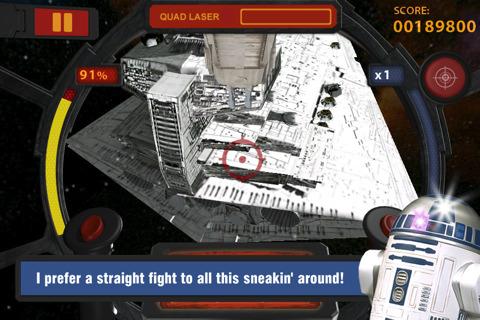 I can’t be the only person who has spent many a moment attempting to replicate fighting off wave after wave of TIE Fighter attack by swinging around in an office chair, man-made sound effects accompanying every shot. The alarming fact on my part is, given I avoided Star Wars until I was 22, most of these re-enactments have taken place in full view of friends and family.

Regardless, Star Wars Arcade: Falcon Gunner has been made almost exclusively to satisfy such desires, handing you control of a turret on the Millennium Falcon and charging you with defending it from the empire’s firepower.

It is, at least on paper, exactly how you might have dreamt it. Playing out against a variety of backdrops – initially, and perhaps most menacingly, right outside the Death Star – you simply fire at anything that moves, whether it’s the swarms of fighters headed in your direction, or the fields of asteroids that threaten to do just as much damage to your shields as any barrage of fire that manages to get through.

In true arcade fashion, shooting down each and every enemy fighter that comes your way – either via your own hand, or a handy auto-targeting system – is your one and only task. Star Wars Arcade: Falcon Gunner is unashamedly archaic in its approach, and like arcade shooters of old, this is a case of kill or be killed.

What might leave many scratching their collective heads is the control set up. It is, to put it lightly, a little more complex than you might expect. Given you’re firing from the Millennium Falcon, your position in the sky is essentially fixed – or, if you wish to immerse yourself into the plot, in the control of Han Solo – but you can move a full 360 degrees in each direction.

Steering the turret is handled by twisting your iPhone like a steering wheel, 45 degrees left or right. The actual cannon can also move independently, a thumbstick on the left of the screen enabling you to target objects already in view without having to swing your turret around. Touching anywhere on the screen also causes it to fire, though it’s possible to temporarily knock it out of action if you fire in too long a stream.

It’s shifting that very view up and down that causes the most problems, however. Lifting and lowering the device causes the view to shift accordingly, but trying to latch on to targets above you requires an angle so wide, you’ll be lucky if you can still see the screen yourself.

The motion is also somewhat twitchy, making shooting down any fighters that have the nerve to fly overhead – which, as you might expect, are plenty in number – something of a painful process. If our play-test is anything to go by, your arms will ache as each stage draws to a close thanks to such aerial intrusions, your patience often tried in the process.

Nonetheless, though one level tends to resemble the next and the controls remain just as twitchy throughout, there’s value in playing on purely because of the upgrades available. Successful missions earn you credit that you can then trade in for added health or souped up firepower – bonuses that can also be unlocked through in-app purchases, should patience finally allude you. 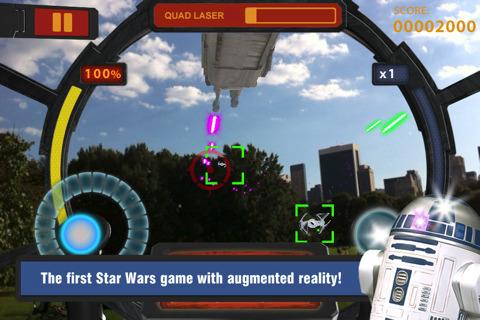 However, more interesting – and, perhaps, more refined – is the game’s augmented reality mode. On the surface, all this does is replace the game’s backdrops with your own surroundings via iPhone’s camera, but THQ has also seen fit to alter the controls somewhat to make it a more enticing proposition.

This is where the 10 year old inside you will really flourish, steering your turret now handled via your own 360 degree movement, with the jerky motion that shackles the standard set up thankfully cast aside as a result.

In essence, playing via AR basically means equipping yourself with an aforementioned swivel chair, or – dizziness permitting – simply turning around while standing on the spot. Either way, it doesn’t actually alter gameplay all too much, but it does provide one hell of an immersive Star Wars experience, however short lived the initial thrill might be.

As such, what shines through Star Wars Arcade: Falcon Gunner throughout is that this is far from a perfect package – the main mode in particular becoming a touch repetitive and clearly derivative of pretty much every arcade shooter going during extended play – but it’s one that’s undoubtedly been fuelled with a ton of passion.

Considering the sheer number of quick Star Wars cash-ins that have come and gone over the years, that’s a trait not to be sniffed at.

Sherlock Holmes and the Hound of the Baskervilles Review