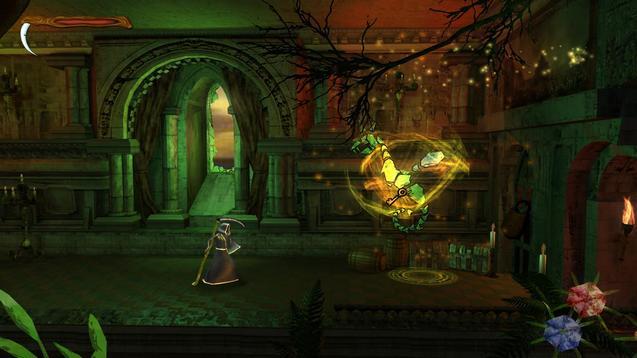 Stained is built on good intentions, but it needs some delicate work.

Houses of prayer can be divisive institutions, but we can all agree on one thing: they boast some kick-ass stained glass windows. That said, have you ever considered shattering one of those windows? Not out of religious protest, but just for the split-second thrill of watching shards of ruby and emerald glass spray out into the sunlight? Yes? No? You probably won’t admit it either way, so why not break some virtual glass guilt-free with Stained? It’s an action-platforming game built around an interesting concept, though the final product still needs a bit of polish.

Stained takes the player (who looks unsettlingly like Death) through a seemingly abandoned castle and kingdom. As you work through the levels, the story unfolds, and you learn more about what brought ruin to the once-thriving fortress. The castle is devoid of life—or at least life as you know it. The spirits of great warriors still reside in the structure’s many stained glass windows, and if you shatter said windows by banging the butt of your scythe against the floor, said warriors will come to life and give you a violent welcome.

Most of the stained glass warriors have a weak spot that you carve up by swinging your scythe. There’s more to life (and un-life) than blades, though. As you play through Stained, you can collect jagged pieces of glass that are fitted into different puzzles. If you manage to complete a puzzle, you gain a new ability or power that helps give you a leg-up on the bad guys.

Stained plays like a standard platformer. There’s lots of walking, jumping, fighting, and a smattering of puzzles. Waking up your enemies by breaking glass is an interesting mechanic, and extremely satisfying to execute. We’re talking about breaking glass, here—what’s not to love? The game’s graphics are gorgeous, and the moody soundtrack against the empty castle grounds creates a haunting atmosphere.

But while Stained has a lot of potential, it still needs a swipe or two with a cloth and some Windex before it can really shine. You can play with your keyboard, but as you can probably guess, it’s not ideal. Currently it looks like Stained only supports the Xbox controller, so if you don’t have a wired 360 joystick lying around, you might be out of luck.

However, Stained has other control issues that can’t be solved with a joystick alone. Hit detection is off, and enemies will cream you even though you swear they should have missed. Worse, there’s no brief flash of invincibility when you do get hit, so it’s not uncommon to go from full health down to zero in three seconds flat. It’s a supremely frustrating experience that scuffs up the game’s tranquil environment.

Stained has its shortcomings and its disappointments, but if Realaxis applies some updates to the game, there may come a day when it glitters.