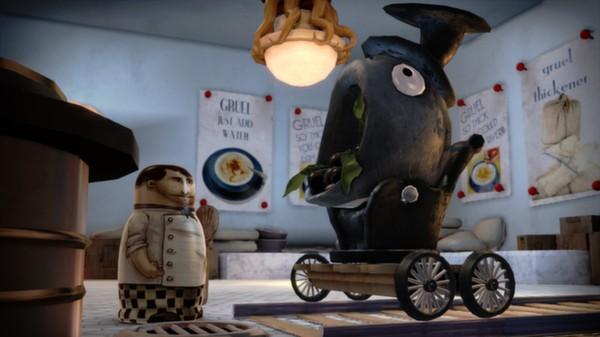 It’s sort of amazing that a company could find an idea like the one explored in Stacking and make it work at all, let alone so well. Stacking presentes a steampunk meets Charles Dickens style world populated entirely by Russian matryoshka dolls (the nesting dolls that sit inside each other). That idea not only gives the world the rich character it so enjoys, but also facilitates quite ingeniously the game’s main mechanic.

You play as young Charlie Blackmore, whose siblings have all been forced into work for the evil Baron. Again, all represented as nesting dolls and getting smaller as you get younger and younger in the family. As the tiniest of the Blackmore’s it’s sort of a shame that saving the family falls to your duty, but nonetheless that’s what happens. Luickily you’ve got a trick up your sleeve.

As you wander the world looking to take down the Baron and reunite your family you’re able to “stack” inside an NPC doll roaming the world that’s one size lager than you. Now you’re in control of them. From there you can either use the ability of that doll or you can find and stack with another larger doll. So on and so forth till you are walking around stacked up inside the largest dolls in the game.

Each doll you stack inside has a special ability that you can employ. Some are purely sight gags like jazz hands or coughing black smoke or going on a sugar rush. Other times those skills can be used to solve puzzles in the game (for example, one doll can “seduce” and shimmy past a guard to lure him away from a protected door). Some of the largest dolls have unique abilities like finding dolls in the crowd or just banging a huge gavel.

So stacking in and out of different dolls is the name of the game here when it comes to solving puzzles to work your way through Stacking. In an interesting twist most puzzles have numerous solutions, giving you freedom to think outside the box and get creative. There’s nothing that I find takes the wind out of the sails of a puzzle game more than forcing you to just come up with the one solution the designer thought up. The only downside here is that they let you solve the same puzzle different ways over and over, which sort of breaks the flow of the linear story. It’s weird.

My only real complaint about the game is that the cut scenes take a little long to play out. They’re setup as a sort of silent movie thing, with a bit of acting (in a sense, these are dolls after all) and then cut to a placard with some talking. It’s cute, but the movie projector effect wears thin and it just moves along too slowly. It’s a fine story and I have no interest in skipping over it, but I can read fast enough that I just end up waiting too long for them to move along. Still – it says a lot about a game when this is the only complaint we can come up with.

It’s a testament to the trail that Double Fine has blazed through all their games. They seem to tackle each project with a fierce desire to be unique and different. Company head Tim Schafer has made something of a career of doing exactly that. Follow his career and Double Fine’s history and you’ll have spent time as wanna-be pirates, tyrannical sentient tentacles hell bent on world domination, trick or treaters turned fighting mechs and heavy metal roadies sucked into alternate universes. So when presented with a game where you play as a Russian stacking doll set against the backdrop of rising up against child labor you just nod and say “Ok, that sounds about right to me.” And when the game is a good at Stacking is, well… all the better.