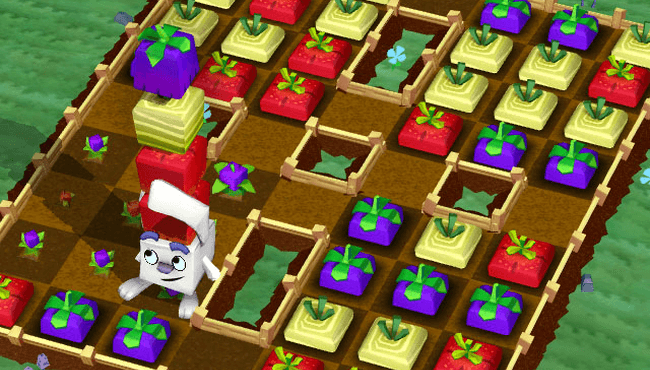 Nature needed a palatable, easily-digestible meal for its carnivores, so it designed the bunny rabbit. That’s not to say rabbits sit around and wait to be eaten. Anyone familiar with Watership Down knows the lapin race has its own blessings, including the ability to murder vegetable gardens with blood-chilling efficiency. Stack Rabbit is an action/match-three puzzle game about a rabbit that cuts down garden after garden (vegans: Viewer discretion is advised). This tasty little turnip from Disney is unique and highly addictive, though like the less healthy Candy Crush Saga, later levels of Stack Rabbitare obviously engineered to gobble up your lives in hopes that you’ll buy more.

Stack Rabbit‘s starring bunny is Ben, a fluffy white hopper who’s been charged with babysitting his brother’s kids. Thing is, Ben’s brother evidently did not stop making it with his wife long enough to even breathe, and now there are a lot of hungry little mouths for Ben to feed. Luckily, there’s a nearby farm with lots of vegetable plots ripe for raiding. Stack Rabbit‘s levels are set up on a grid. Most of the grid spaces are occupied by a vegetable, or by a sprout. When Ben hops into a fully-grown vegetable, he flings it upon his head (he’s got a square head, and these are square vegetables). When he matches three or more identical vegetables, they go towards the total he needs to collect in order to move on to the next patch.

There are conditions to collecting, though. Foremost, each patch is guarded by a dog that’s not big on the idea of rabbits frolicking in his master’s vegetable patches. Said pooch spends most of his time snoozing, but there’s an alarm clock that goes off after a certain amount of moves, so Ben needs to do his thing before that happens. Every time you make a match, the move counter ticks down by one. The kicker is that most levels require you to collect vegetables in a certain order. So if the game calls for eggplants and you collect tomatoes, those tomatoes don’t count towards your level progress.

However, collecting the “wrong” vegetables still grants you points, and causes sprouts to grow. In other words, it’s often necessary to collect outside the indicated vegetable in order to clear a path to the right veggies and cause new plants to grow. All the while you need to remember that Ben can only stack seven veggies on his head at once. If he goes overboard, the entire tower falls, and he loses several turns. Stack Rabbit demands forethought and careful movements (which is easy, thanks to rock-solid controls), and it offers a new puzzle experience while managing to retain the addictiveness of the match-three genre. This is definitely an “Oh, one more level” game, so budget your time accordingly.

Budget your patience, too. The further you get into Stack Rabbit, the tighter the requirements for success become. Room for error becomes infinitesimal, and given the boards’ random setups, success sometimes depends on playing a level over and over until the pieces are stacked in your favor. Before you know it, you’ve burned through your stock of five lives and must wait hours before they recharge. That is, unless you want to pay cash money for more lives. Or for power-ups. No freebies, rabbit!

Stack Rabbit presents a new take on the match-three genre, and it’s nearly as addictive as Candy Crush Saga. Impressive stuff, overall. It’d be nice if the game did away with the Candy Crush-style difficulty spike and panhandling for in-app purchases, but sometimes you just need to swallow the bad vegetables along with the good.