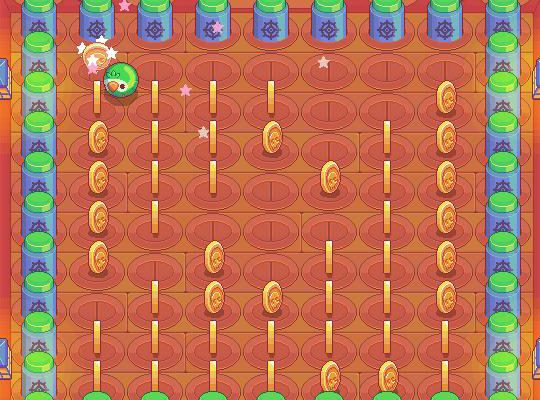 They say that history is written by the victors. In playing Squawk I can only imagine future generations will read about my phat parrot rolling skills, and how my ability to steer said parrot around sharks and into coins was unparalleled. Songs will be sung of the adventures my rotund parrot and I have undertaken, lifting the spirits of the downtrodden. Or, maybe since I’m just talking about a browser game I might be getting a little ahead of myself. Or am I?

Squawk is the newest game from Nitrome and requires you to control a parrot in the shape of a ball as it rolls around the deck of a ship avoiding obstacles and gathering treasure. The game looks cartoony and is definitely accessible to just about anyone. That can be good or bad, since everyone can take a shot without getting frustrated but it’s open to debate how entertained more seasoned players will be.

The really unique aspect of Squawk is the control scheme. In order to get your little round parrot friend to roll around the field collecting coins you need to click and hold on different “steering buoys” spread around the outside of the playfield. Activating a buoy will draw the parrot to it like a magnet, taking into account current direction and speed as well. So if the ball if headed south and you click east it doesn’t stop and make a turn, the parrot will continue south and bend eastward. The effect looks very much like a magnet at work. 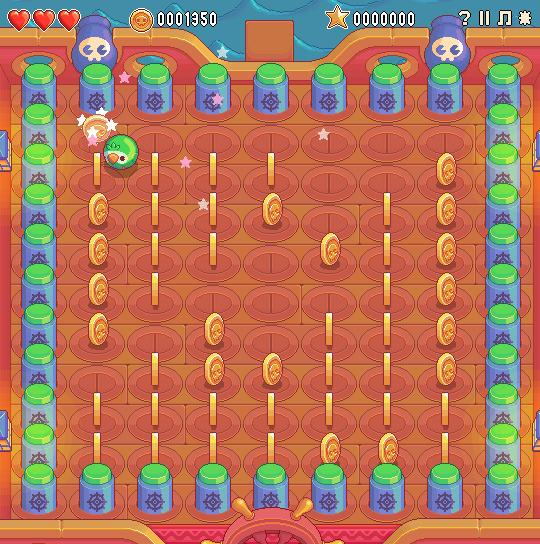 There are only a few different kinds of obstacles to watch out for as you bounce around the deck of this little pirate ship, and they always arrive the same way, which is by popping up through the floor. Early on they’re pretty easy to avoid since they can be pretty sparse and always come with a warning. You’ll see a skull and hear a “spooky” noise a few seconds before the hurtful buggers appear.

There are little pirates who just stick straight up and don’t really do anything else special. Then there are sharks who pop up in one spot only to reappear right away in an adjacent spot. In addition to those there are electric blocks that come in groups and holes that open up and just stay that way. Except the holes (obviously) they’ll jut up through the floor in the same way the coins and barrels do, only these guys each take a heart worth of life off you. Lose 3 and you’re finished.

There’s no level to move on to, no boss battle to fight and no great obstacle to overcome. Squawk is a race to the highest score possible before taking 3 hits. You sometimes have the chance to grab a heart to replenish health to try and last longer to nab a higher score. The control scheme is the part that keeps the game interesting, as it is pretty unique.

As it stands Squawk is a pretty nice diversion, something to kill a few minutes here or there with, though I doubt it’s a game I’d return to again and again long term. It’s pretty hard to break into my go-to browser games, so don’t necessarily take that as a bad sign. All it really means is that Squawk is a good game, but it’s far from a classic.