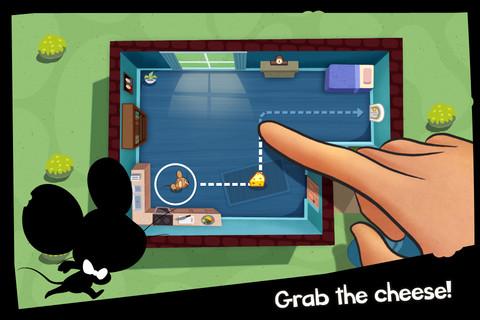 Spy Mouse proves that line drawing games can be much, much more than Flight Control clones

Flight Control. Real Racing. Firemint is a studio that’s known for putting players in control of the biggest machines imaginable. So it comes as something of a surprise that instead of another giant of transportation, their latest game puts you in control of the littlest creature they could think of: the mouse. Not just any mouse, mind you, but a Spy Mouse. And he’s hungry for cheese!

Since Firemint pretty much invented the line drawing genre with Flight Control, it only makes sense that they’re the ones intent on re-inventing it. Spy Mouse is a top-down puzzle game in which players will guide their mouse (Codename: Agent Squeak) to different kinds of cheese by drawing a dotted line on the screen for the little critter to follow. The object of the game is to get every piece of cheese and make it safely to the exit – hopefully without being spotted by a cat. If a cat does happen to see you, it’ll try to catch you. Should it succeed in making you its lunch, you’ll just have to try the puzzle over again.

It’s a fairly simple premise, and honestly, the first handful of levels are a little too easy to hold your interest. Push through those though, and you’ll be rewarded with a puzzle game that’s worth its weight in cheese.

As you progress through the game, Spy Mouse is constantly introducing new elements. Different kinds of cats, for example, have different styles and pursuits. One may rear up for a charge, bonking their head on a wall should they miss, while another may pursue you relentlessly. Play long enough and you’ll encounter blind cats, ninja cats – the whole shebang. You’ll also be introduced to power-ups, distractions, and helpful items at regular intervals throughout the course of the game. And who doesn’t love a mouse hole that lets you pop out at another place in the room? Or a toy mouse you can send into a cheese-baited trap on your behalf?

I honestly can’t remember the last time I’ve played a game where both the difficulty curve and the introduction of new elements were paced so well. Take note developers: when it comes to these elements of game design, Spy Mouse is the new target you need to shoot for.

At the end of each of the game’s worlds, Spy Mouse breaks up its standard puzzle gameplay by injecting a boss fight into the mix. You’ll still use all of the skills you’ve acquired throughout the game, but now the objectives are different. Instead of sneaking around, stealthily trying to grab all the cheese and making a hasty retreat, boss fights will have you trying to figure out just what to do to beat a scary cat in a mechanical monstrosity (so that’s where Firemint put their big vehicles in this game!) Boss fights rely less on timing and more on logic, making them a nice break from you’ll experience in the rest of the game. 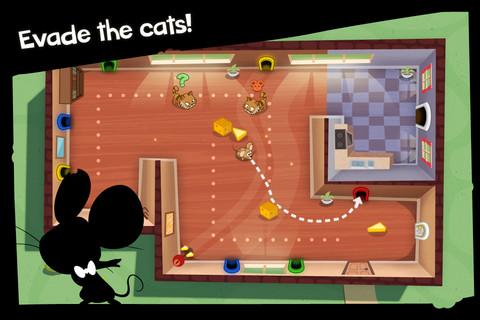 As it turns out, line drawing isn’t the only thing Firemint was intent on re-inventing with Spy Mouse. They’ve also re-invented the notion of replayability. Sure the game comes jam-packed with levels, but should you finish them all and want a solid reason to come back, Spy Mouse actually gives you something more than finding some hidden stars or trying to set a new high score. They’ve created a “medals” system, in which each level has three medals you can earn, but you can only earn them by doing certain level-specific tasks. In one instance you might be trying to unlock a medal by drawing no more than 3 paths to complete the stage. In another, you may get one for getting a throwing star stuck in your cheese. Admittedly, many of these challenges do get repeated in different levels – but by giving you specific tasks to accomplish, Spy Mouse reimagines what can be done for replayability. Again – developers, take note.

Equal parts Flight Control and Metal Gear Solid, Spy Mouse proves that line-drawing games can be much, much more than simple Flight Control clones. The levels are ingenious, the stealth puzzle gameplay is inspired, and the difficulty curve makes it accessible for players of any level. It feels somewhat hack to say “Firemint’s done it again!,” but seriously – Firemint’s done it again. If you were wondering what the next Angry Birds or Cut the Rope was going to be, this is it.