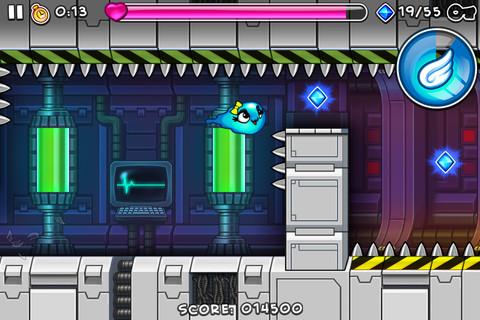 Do you have enough spunk and moxie to power through this fast-paced platformer?

You’ve got to feel bad for the janitors in video games. I know I wouldn’t want to be the one to mop up the slimy warehouse floors after Spunk and Moxie have made their way through. Spunk and Moxie is an unforgiving platform and running hybrid game that moves at a lightning-fast pace, and puts your every reflex to the ultimate oozy test. It’s funny; I always thought ooze was supposed to be slow!

The game lets you play as either Spunk or Moxie, a green ooze ball and a pink ooze ball, respectively, as they make their escape from a test-tube imprisonment and head for greener (or oozier?) pastures. Having said that, the storyline is nonexistent, and there’s no difference in playing style depending on who you choose. The game features 30 levels spread out across 3 different environments: the warehouse, the factory, and the laboratory. The cartoon visuals are nice and crisp, but the industrial settings tend to be a bit droning, and make for some pretty bland brown and gray colors schemes.

There are some nice gameplay mechanics that get introduced the further you progress in Spunk and Moxie, like switches that manipulate the environment, or one-way doors that interrupt the flow of your sliding and bring a certain puzzle element to the platforming. You’ll also come across some nifty potions that add on to your health or let you smash through obstacles and hazards like crates and whirling saw blades. You can stock up on these potions in the store so you can use them at other points in the game wherever you’d like, which will certainly come in handy when gunning for the game’s many brisk challenges.

There’s a ton of replay value to be had here, even for a game with only 30 levels. There are 7 bonus challenges to take on in each, which reward you for things like completing the stage in a given time limit; collecting every gem in the area; finding the hidden key; avoiding any damage; and completing the level on Hard Mode. No problem, right? Yeah good luck with that! Every challenge is a real test of your platforming skills, not to mention your patience, and buying potions quickly becomes a requirement to accomplish most of these goals, let alone more than one on a single run. I’m also told you’ll unlock “something amazing” for finding every hidden key in a given level set, but you’ll have to let me know what that is, because I couldn’t find them all for the life of me.

Now, I like to think that I’m pretty good at platforming games, but I found Spunk and Moxie to be an insanely frustrating experience. Finishing a level tends to only add more annoyance for having taken so long to beat it, rather than a rewarding feeling of accomplishment or overcoming a challenge. I barely managed to get through the game’s 30 levels on Normal Mode, so I can’t imagine what Hard Mode must be like, where a single point of damage ends in an instant ‘Game Over.’

The one-touch controls are fairly straightforward, but not nearly as accurate as the gameplay’s high expectations require them to be: tap once to jump; tap and hold to jump higher; and continue to hold to bounce off of walls.

I think a lot of the unbalanced difficulty comes from the immense precision that’s required of the player, coupled with how dizzyingly fast your little ooze balls will move. You’ll need to make Spunk or Moxie jump at just the right moment to get through the narrowest of openings, and the slightest lapse in judgment will send you sliding back in the opposite direction or sprawling into a pit of spikes. The turnarounds happen so fast that by the time you come up to that same missed jump for a second pass, it’s likely you won’t be ready for it again, and you’ll helplessly watch history repeat itself to no end. Spunk and Moxie has absolutely no qualms about punishing you for failing to keep up with its speed, and sending you back to the beginning of a level for the slightest mistake.

In the end, Spunk and Moxie may be a little bit too demanding and imbalanced for some, but that’s not to say it’s not a pretty sound experience overall. The cartoon visuals look great, and there’s some nice replay value to be had in all of the bonus challenges, depending on your skill. Just think twice about playing if you have a short temper, because the game’s absurd difficulty can leave your ears steaming and turn your brain to ooze!

Shadows: Price for Our Sins Review